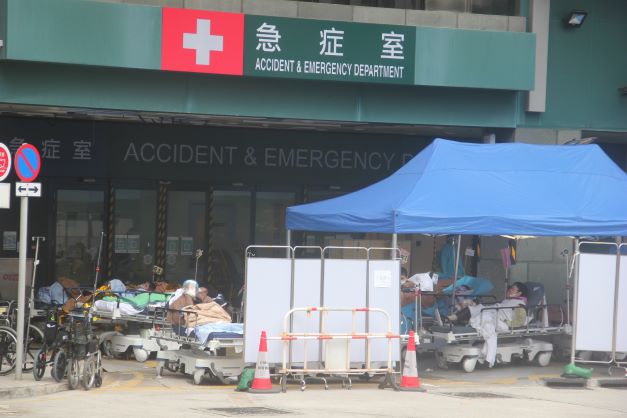 Infected patients waiting in the cold for beds at Caritas Hospital

Flashed back to last year, Beijing has given two major tasks to the Carrie Lam administration in Hong Kong. First, win the anti-Covid 19 battle. Secondly, get the three sets of patriots-only elections scheduled for the period between September 2021 and March 2022 done well. Doing so could help ensure the SAR moves forward on the right path of “one country, two systems.”

Putting an end to the coronavirus pandemic, or at least containing the infections, is the key to bringing the economy and daily life back to normal. The border between the city and the mainland, largely closed since the outbreak in 2020, could then be reopened. Social and economic significance aside, the political ramifications of re-connecting the city and the mainland cannot be emphasised more.

Shocked by the storm of citywide protests against, first, an extradition bill, then the Lam government erupted in 2019, Beijing has adopted a two-thronged approach to restore what they see as order and peace in the city in 2020.

First, a massive crackdown against people and groups they deem to have posed a threat to security. A total of 167 people have been arrested under the national security law since it took effect on July `1, 2020. Of them, 105 have been formally prosecuted. 19 months on, the pan-democratic camp has disintegrated..

Secondly, the National People’s Congress Standing Committee has overhauled the election systems for the chief executive, the legislature and the Election Committee.

Revamped under the all–important principle of “patriots ruling Hong Kong,” the three sets of elections for the chief executive, a new legislature with membership increased from 70 to 90 and an 1,500-member Election Committee are aimed to form a stronger fleet of “governing talents”.

In accordance with the timetable, elections for the Election Committee and the Legislative Council were held in September and December last year respectively. A new Legco with the notable absence of the democratic camp took office in January.

Seven weeks after Hong Kong entered 2022, the two major tasks Beijing have repeatedly stated are not yet fully accomplished. Worse, the city is mired in a deepening crisis.

Battered by the worst infections since 2020, the hospital system is on the brink of collapse. Hundreds of infected patients were waiting in the cold outside A&E departments in hospitals, waiting for admission, in the past few days. Regina Ip, a member of the top-advisory Executive Council, lamented the scenes resembling those in “the third world.” 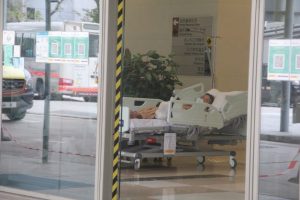 Of the three important elections, the 2022 chief executive election is arguably most important. Nomination period was originally scheduled to start on Sunday (Feb 20).

The game plan changed in the wake of the “important instructions” on Hong Kong’s anti-pandemic battle made by Xi.

Xi reportedly “emphasised that the Hong Kong SAR government has to take the main responsibility, and put controlling the pandemic as the mission that supersedes all, mobilising any power or resources that can be mobilised, taking every necessary measure, ensuring the life safety and health of Hong Kong citizens, ensuring the stability of Hong Kong society.”

The reports did not mention the upcoming chief executive election.

Echoing Xi’s order on Wednesday, Chief Executive Carrie Lam has vowed the government, together with the society, was in one heart battling against the pandemic. She did not mention the election. Mrs Lam has earlier said there was no plan to change the election schedule. She had played down fears of infections during the election, saying only about 1,500 people are entitled to vote.

On Friday, she told a press conference the election will be postponed to May 8 so that the government can focus its efforts on fighting Covid-19. 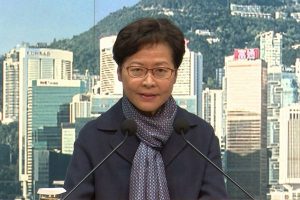 Hours before she spoke, Tam Yiu-chung, the only Hong Kong delegate who sits on the NPC Standing Committee, has already said the election must be postponed, saying the anti-pandemic work is above everything.

With no role in the electoral process, the now-deferred CE election has been a non-event to most people. Many do not even bother to know whether Mrs Lam will run again and who are the contenders. The health crisis further deepened their feeling of indifference towards the election. The government’s failure to tackle the pandemic fuelled public anger. Holding the election as originally planned risks not just splitting government efforts on the pandemic but pouring oil to fire.

This is simply because the poor leadership of Mrs Lam, be she a candidate or not, will certainly be one of the major election issues if it is held as scheduled. It will put not just her but the central government in an embarrassing situation.

While diverting attention on fighting the pandemic, a CE election at the wrong time could draw unwelcome attention to the harsh reality that Beijing’s two missions for the Lam government are yet to be accompanied.