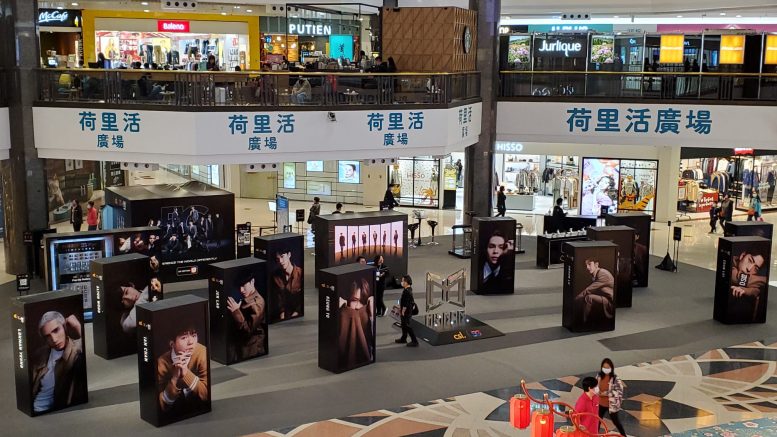 Panic drives out Mirror band fans and holiday-goers in a shopping mall.

February 13 saw a not-so-usual Sunday in Hong Kong, once being promoted as a city of vitality. Traffic was markedly smooth as many drivers left their vehicles – and themselves – at home. There were no queues for seats in restaurants, nor crowds in shopping malls. Many people were busy snapping up food and vegetables and daily necessities in anticipation of a lockdown of the city, or the district they reside.

Three weeks after the city’s fifth wave of Covid-19 infections began to rage on,  Hong Kong has plunged into panic and mayhem. 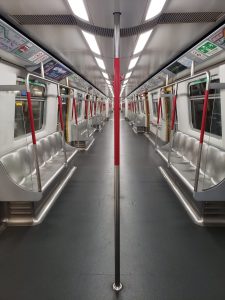 Hospitals beds are now not immediately available to people who were tested positive to the virus. More than 1,000 infected patients have to stay at home, waiting for admission. Many had waited for several days before they could receive treatment in hospitals. Adding to their agony, some found their family members subsequently having been infected during their stay at home.

Health officials said the situation “was not ideal.” Signs are aplenty the city’s public hospital system is verging on a meltdown; and the city as a whole towards a lockdown. 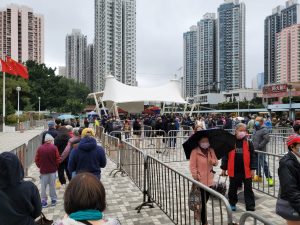 Residents queue up for hours for Covid testing.

As many other places in the world began lifting their social distancing restrictions, Hong Kong is seemingly moving in the opposition direction towards a shutdown. Officials cited a World Health Organisation directive to say that it is the last resort of battling against Covid-19 pandemic, but refrained from commenting on how far or near the city is.

A feeling of panic among people spread like Omicron in the last few days as the number of infections jumped. On Sunday, health officials reported about 2,000 suspected cases, along with more than 1,340 confirmed infections, a new high since the outbreak of the pandemic.

The runaway tally of infections was reported one day after a team of top government officials held a crisis meeting with officials from the central government’s State Council, Guangdong and Shenzhen authorities in Shenzhen on Saturday.

The meeting, the second of its kind, was convened following a request by the Carrie Lam Cheng Yuet-ngor administration for a helping hand from the mainland authorities to avert the public health crisis.

Speculation was rife on the eve of the Shenzhen meeting that the Government will, with the helping hands from the mainland, impose a citywide lockdown to try to achieve zero infections.

Speaking to reporters after returning from Shenzhen on Saturday night, Chief Secretary John Lee put on a brave face, albeit literally as part of which was under a mask, saying he was confident that things would get better without resorting to the last resort with the mainland’s assistance.

Lee said the mainland authorities have agreed in principle to assist the SAR in a variety of ways, including helping Hong Kong to build more isolation and quarantine facilities; expanding its testing capacity; and ensuring adequate supplies of medical equipment, fresh food, and daily necessities from across the border. 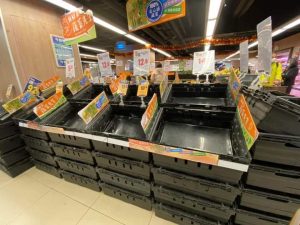 Empty vegetable boxes in a supermarket.

A number of special cross-border task forces, he said, will be established immediately to take forward various plans to beef up Hong Kong’s anti-epidemic measures. “At the present moment we don’t have this [lockdown] plan.”

Lee’s supposedly assuring words and Beijing’s assistance, not surprisingly, have failed to ease the jitters of the people over an imminent lockdown, or some kinds of which, in the city. They voted with their feet, stocking up food and necessities in their homes.

More than two years after the Covid-19 virus hit the city, public confidence in the ability of the Lam administration in restoring normal life, or kind of, has been depleting.

Like Lam, they don’t understand the official anti-Covid 19 strategy copied from the mainland’s “dynamic zero infection” means, not to mention the wisdom of which. What looks certain is that the SAR government has no other alternatives but to follow the national strategy irregardless of the unique situation in Hong Kong.

When it comes to the anti-Covid 19 battle, there is and will only be one strategy, namely “dynamic zero infection”, as “one country” overrides the “two systems.”

In line with the notion of “one country, one strategy,” the formation of five task forces composed of officials from Hong Kong, the central government and Guangdong and Shenzhen authorities marks a new stage in the anti-pandemic battle.

The mainland authorities look set to play a bigger, or even leading, role in the fight against the pandemic. Fresh doubts have been raised about the role of Carrie Lam now that John Lee has emerged as the chief coordinator, if not commander, in the battle, taking orders directly from the mainland.

With the next chief executive election scheduled for March 27 nearing and the health crisis deepening, the battle against the Covid-19 pandemic has become even more complicated and uncertain.

One thing looks certain. The stakes are now sky-high with Beijing throwing their weight behind Hong Kong. The anti-pandemic battle has become a battle they must win at all cost.