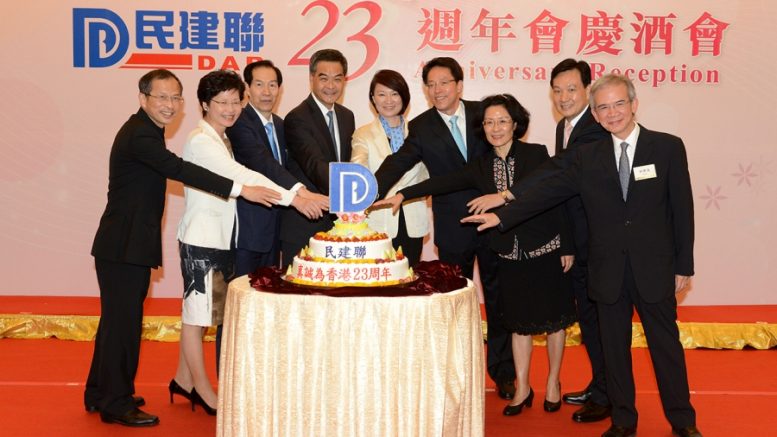 Zhang Xiaoming, director of the central government's Liaison Office, has helped raise tens of millions of dollars for the Democratic Alliance for the Betterment and Progress of Hong Kong. He (left to Starry Lee) attends the party's 23rd anniversary party.

Is it because the idea came from Woo Kwok-hing, whose chance of becoming the chief executive is almost zero even if he gets the ticket to run for the race? Or it is because Hong Kong people have already resigned to the reality that the meddling of the central government’s Liaison Office, though undesirable, is inevitable?

That the call made by Woo, a retired judge, recently during his election campaign, and was formally included in his manifesto unveiled on Sunday has been greeted by indifference among the populace is intriguing.

It does not augur well for the future of the “one country, two systems” concept for Hong Kong under Chinese sovereignty, under which the city should enjoy a high degree of autonomy, both in the letter and the spirit of the Basic Law.

It has not come as surprise that it is Article 23, not Article 22, that has become an election issue among the four contestants since they rolled out their campaign. They have been grilled about their stance on the legislative plan for the anti-subversive Article 23, which has been shelved indefinitely days after the July 1 rally in 2003.

Article 23, which falls under the section on central government-Hong Kong SAR relationship, is the centrepiece in the post-1997 charter that obligates Hong Kong to uphold national sovereignty, security and territorial integrity.

Woo apparently believes Article 22 is equally, if not even more, important under the “one country, two systems” constitutional framework.

Article 22 states: “No department of the Central People’s Government and no [regional authorities] … under the Central Government may interfere in the affairs which the Hong Kong Special Administrative Region administers on its own.” 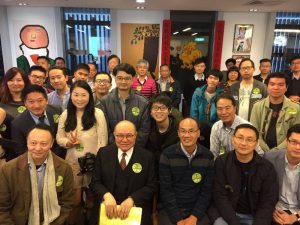 Woo Kwok-hing, meets with supporters at the weekend.

In his manifesto, Woo has proposed making a law to ban “meddling” by mainland Chinese authorities in the city’s internal affairs. He warned that the public perception about interference would undermine the city’s political, social and economic progress.

“Article 22 prohibits any interference … but without a law to criminalise it, there is nothing you can do about any contravention of the article,” he said.

The Article 22 provision does not specify how it is implemented. Given the fact that the Basic Law is also binding on the mainland authorities, the central government has the responsibility of ensuring no departments and regional authorities interfere in the city’s internal affairs.

Whether or not and how the central government has implemented Article 22 since the handover is unclear.

Take the missing bookseller case as an example. Despite the repeated denials by the mainland and Hong Kong governments that mainland public security officers have enforced law in the city, there are rife speculation that certain unidentified mainland agents have abducted bookshop boss Lee Po back to the mainland.

If true, it would have constituted a case of mainland authorities infringing the autonomous powers of the Hong Kong government.

In what seems to have become part of Hong Kong politics, the hands of the Liaison Office, dubbed as “Western” because of the location of its office complex, in the city’s political affairs have become increasingly visible in recent years.

Speculation had been rife that “Western” had been active pulling the strings behind the city’s district and legislative council elections. There had been claims that Liaison Office officials had involved in talks among various pro-establishment candidates for a compromise on their election plan.

Earlier, New People’s Party legislator Regina Ip Lau Suk-yee has revealed Liaison Office director Zhang Xiaoming had suggested to her that she should run for the post of Legislative Council President.

Last month, pro-establishment lawmaker Michael Tien Puk-sun also complained the chief executive election had “lost its shape” due to interference by “an invisible hand”, apparently referring to the Liaison Office.

As much seems to be going on behind the political scene, senior Liaison Office officials have not shied away from the public limelight and lending their weight to the “loving China, loving Hong Kong” force.

Zhang has helped raise tens of millions of dollars for the pro-Beijing Democratic Alliance for the Betterment and Progress of Hong Kong by offering his calligraphy pieces for auction.

Whether and how Article 22 can be turned legally binding, and if so, in local or mainland law, is highly complicated and sensitive. Nor it is simple task to ban Beijing’s top official here from donating calligraphy to political parties for fund-raising.

But with fears about Beijing’s visible hands growing, the central government is obliged to act to dispel the doubts by reassuring the local and international community they meant what they said in the no-interference Article 22 provision.