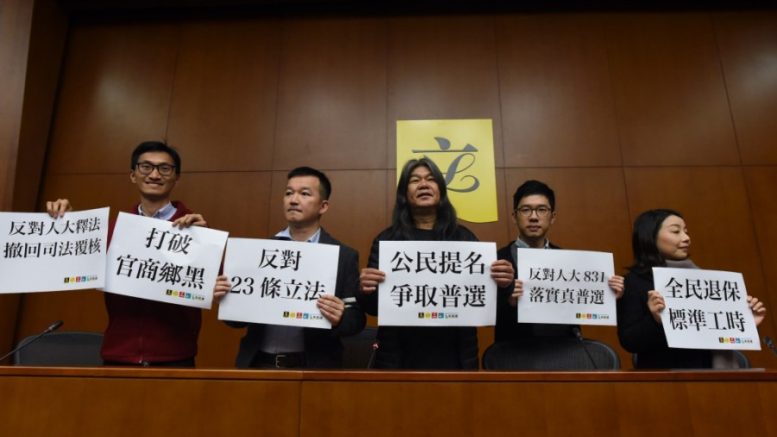 Though ridiculed as “small-circle election,” the chief executive elections in Hong Kong have never seen a dearth of surprises, ironies and entertainment. The entry of “long hair” Leung Kwok-hung into the fray yesterday is a case of all three.

Remember the “bowtie versus pocket handkerchief” in 2007? Yes, that was the symbolised match between “bowtie” Donald Tsang Yam-kuen and Civic Party’s Alan Leong Kah-kit, who is known for his liking of wearing pocket handkerchiefs. There was ugly drama in 2012 when Leung Chun-ying and Henry Tang Ying-yen were mired in a mud-slinging match for the top post. Caught in the middle was an also-ran Albert Ho Chun-yan, who flew the banner of the pro-democracy faction.

This year’s chief executive race kicked off, in a sense, with the surprise announcement by Leung on December 9, saying he would not seek five more years to prolong his rule at the end of his current term. Seen as a surprise decision before that date, Leung’s deputy Carrie Lam Cheng Yuet-ngor made an expected announcement on December 10 she would reconsider running for the top post.

She declared his election bid last month and is now widely reported to be the only aspirants who has Beijing’s blessings, intriguing many about what the ongoing election campaigns are about.

Leung, who had consistently boycotted the “small-circle” elections and vehemently attacked Albert Ho and Alan Leong who did so before, has decided to dip into the dirty water, claiming none of four serious candidates could represent the pan-democrats.

He aims to get 38,000 nominations, or about one per cent of the city’s eligible voters, via digital platform. If he succeeds, he will solicit nominations from the 1,194-member Election Committee for an entry ticket for the March 26 election.

Under the election law, a candidate needs to get at least 150 nominations to be qualified for the contest.

Although the pan-democrat camp holds more than 326 seats enough for them to support the candidacy of two aspirants, their initial reaction to Leung’s election bid has been lukewarm, if not cool.

Few seem to feel excited with initiative of Leung. Democrat James To Kun-sun said he was shocked and confused. Conspiracy theorists claimed his bid could, or was indeed aimed to, worsen divisiveness within the already-fragmented pro-democracy camp.

Admittedly, there is so far no political aspirant flying the banner of the pan-democrats in the ongoing chief executive election. But judging from opinion polls, it is clear that most supporters for the pan-democrats found both former financial secretary John Tsang Chun-wah and retired judge Woo Kwok-hing acceptable and that Tsang, in particular, has a decent chance of winning the election.

As many of them see there is no real chance for “Long Hair” to win even if that is desirable, they may not find it meaningful to support his online nomination campaign. Whether he can solicit 38,000 online nominations from voters is uncertain, at least for now.

Even if he succeeds, it is unclear whether the pan-democrats in the Election Committee, who call themselves 300+, will offer enough nominations for Leung to get the candidacy.

It seems certain, nevertheless, they will give priority to Tsang for him to run against Carrie Lam they branded as “Leung Chun-ying 2.0”. Despite the fact that the pan-democrats are unhappy with Tsang’s stance on political reform and Article 23, they are likely to go for him as the “lesser evil”.

True, the pan-democrats may not be able to frustrate Lam’s election bid if she can get enough votes from the pro-establishment camp, which holds more than 700 votes. The last thing they want is to be condemned by history if Tsang is beaten by Lam on March 26 because the pan-democrats refuse to give their backing.

There is no doubt “Long Hair” campaign will cause a stir within the pan-democrat camp. But its impact on Tsang’s bid should be limited. If he succeeds in his civic nomination test, he may split the nominations from the 300+. Woo’s chance of getting 150 nominations as required looks certain to get slimmer.

In view of the positive feedback towards Woo’s election bid in the past few months, more people may prefer to have the retired judge taking on the other two or three political heavyweights in the election campaign than “Long Hair”, which would be equally, if not more, interesting and entertaining.