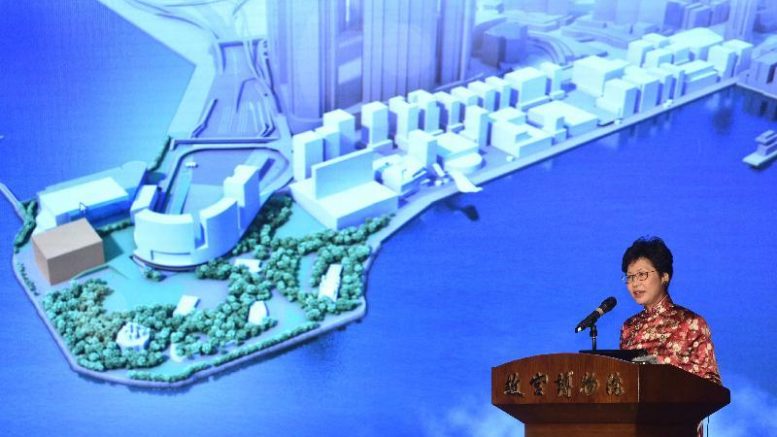 Chief Secretary Carrie Lam Cheng Yuet-ngor, tipped as a chief executive contender, seals a deal to loan exhibits at Beijing's Palace Museum at the West Kowloon Cultural District, a centerpiece of the 20th anniversary of the 1997 handover.

Though coincidental, the contrast between the deeds and words of Carrie Lam Cheng Yuet-ngor and John Tsang Chun-wah in the recent week could not be more interesting. Seen as two key contenders of the upcoming chief executive race, their de facto pre-election campaign acts in Beijing and Hong Kong have nearly defined the March 26 battle.

The past week saw Mrs Lam, the Chief Secretary, visiting Beijing twice. Last week, she officiated the signing of a HK$3.5 billion deal with Beijing to create a replica of the capital’s celebrated Palace Museum at the West Kowloon Cultural District. Yesterday morning, she cancelled her scheduled holidays and flew to Beijing to attend another event scheduled to be held at the Palace Museum Thursday.

Putting aside, for now, the complaints against the secrecy surrounding the project wholly funded by the Hong Kong Jockey Club, the political ramifications of the latest baby of Mrs Lam on her much-anticipated bid for the next chief executive have intrigued political watchers.

Speaking at last week’s ceremony, Chief Executive Leung Chun-ying hailed the Chinese government’s consent to offering exhibits to the new museum on loan at the cultural complex “the best and the biggest gift” to celebrate the 20th anniversary of Hong Kong’s return to the motherland.

As the official overseeing the July 1 anniversary, Mrs Lam cannot afford any hiccups in the delivery of her baby, now looks certain to be the centerpiece of the celebrations.

Perhaps more importantly, the project has provided a golden opportunity for her to shepherd an initiative that carries profound political significance in China-Hong Kong politics.

At a time of the prevalence of separatist sentiments, the cultural-cum-political offer is aimed to help nurture a sense of national pride and identity among the Hong Kong people.

It is seen as a soft approach to moderate the feeling of resistance and separation among some quarters of the society towards the communist-ruled mainland.

While Mrs Lam was spearheading what some critics have branded as “cultural united front work,” John Tsang, former financial secretary pending Beijing’s nod, was on a vastly different path.

As Mrs Lam visited Beijing twice in the past seven days, Tsang paid a visit to Sham Shui Po, known as the poorest district in the city, and Sai Kung, a weekend attraction of the middle class. In one post on his Facebook, he wrote his contact with ordinary people in close distance in Sham Shui Po. “(I enjoyed) the delicious food and feel the human touch and vigour of people.” 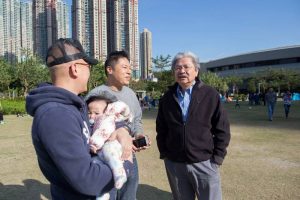 Writing about his trip to Sai Kung and a sharing with young parents at a park in Tseung Kwan O, Tsang said: “(We talked about) education, work and raising children. They gave me a lot of valuable opinions. And it makes me understand it is not easy to be parent nowadays.”

Cynics may dismiss Tsang’s mingling with ordinary people as political shows aimed to build a positive image in preparation of the upcoming election battle.

Some are adamant, not without ground, that it would be politically smarter and more practical for chief executive aspirants to make more friends and build up connections, or guanxi, in the Chinese capital. After all, the Beijing leadership has the final say. The 1,200 Election Committee members will cast their ballots to deliver the result Beijing wants to see.

It is anybody’s guess on whether that is on Mrs Lam’s agenda. With the unexpected exit of Chief Executive Leung Chun-ying from the race for the top post, she is racing against time to fast-track her pre-election campaign. Her increased presence in Beijing, the nation’s centre of power, seems to be part of her game plan.

As soon as she launches her election campaign as many have anticipated, there is no doubt she will be catching up on the battle for people’s hearts and souls as Tsang has doubled his efforts since he tendered his resignation more than a fortnight ago.

It will prove to be an uphill battle for Mrs Lam, however, as she is increasingly being seen as closer to the power in Beijing than the ordinary people at home.

Be the first to comment on "One election, two campaign fields"