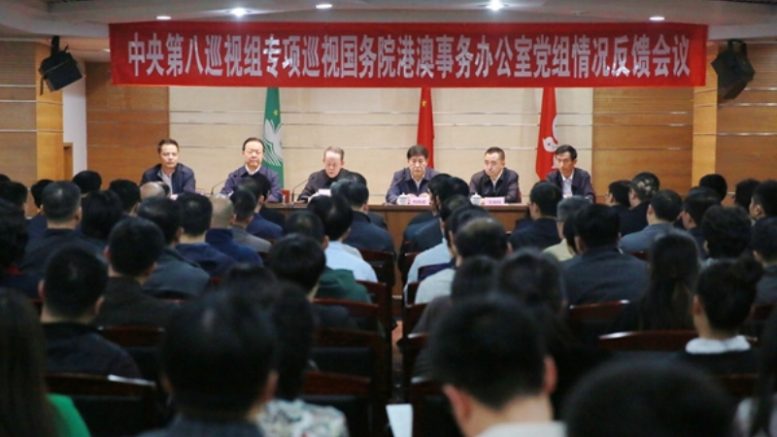 Last Friday night’s sharp critique of the work of the State Council’s Hong Kong and Macau Affairs Office by the Communist Party’s high-powered graft buster has dropped a bombshell in the mainland-Hong Kong political landscape.

China-watchers and political pundits were perplexed about the scathing attacks against the mainland’s key driver of the Hong Kong policy by the party’s Central Commission for Discipline Inspection at the end of an inspection conducted between July and August.

Questions were raised about its implications on Beijing’s policy towards Hong Kong and the fate of the HKMAO and the central government’s Liaison Office in Hong Kong. And more important, whether the criticism against the HKMAO has any impact on the upcoming 2017 Chief Executive election.

There are no immediate answers.

The only certainty is uncertainty. It looks increasingly certain changes in Beijing’s tactic and approach, if not policy, towards Hong Kong, are imminent.

In the report, the HKMAO was criticised by the party’s top graft buster for weak leadership, corruption risks and ineffectiveness in enforcing orders from the central leadership.

Admittedly, the HKMAO check was part of the ongoing anti-graft crusade led by commission head Wang Qishan, who sits on the party’s Politburo Standing Committee. Wang announced in June inspection teams would be sent to the HKMAO and National People’s Congress agencies including the Basic Law Committee for Hong Kong.

The anti-corruption drive, which has emerged as the signature agenda of President Xi Jinping since he took power in 2013, aimed to cover all party and central government organs and state-owned enterprises.

Despite the broader background of the anti-graft inspection, it is inconceivable that the blistering criticism against the HKMAO would only bring about changes in its internal functioning and policies such as personnel arrangements and the use of office space.

The HKMAO-bashing report could pave the way for a long-awaited shake-up of the senior echelon of the HKMAO and the Liaison Office in Hong Kong. And if both see the installation of a new leadership in the next couple of months, there is a reasonable chance that there will also be a change of helm at the Hong Kong SAR.

Already steeped in growing uncertainty, the fate of Chief Executive Leung Chun-ying after his current term ends on June 30 is increasingly unclear.

The simple truth is that Beijing may prefer to have a new face to become the next chief executive if it decides to right the wrongs of its policy arm on Hong Kong affairs.

That does not mean the ruling party is set to make another major change of its Hong Kong policy since it altered its course in the wake of the 500,000-strong July 1 rally in 2003.

It is still unclear. What seems to be certain is that Beijing’s policy towards Hong Kong since 2003, in particular in the past four years when the city was under Leung’s leadership, is anything but success.

Strain in mainland-Hong Kong relations turned into friction and tension. Political and social schism in the society grew deeper and wider. Public faith in the government and the legislature sank to a new low. You name it.

Xi, who is keen to build a strong nation under his reign, cannot possible be contended with the situations in Hong Kong.

Change seems no longer a question of if, but how.

Confronted with a host of external and domestic woes, it is not likely that Xi will abandon the present hard-line stance and switch to a more liberal and moderate approach towards Hong Kong.

Some pundits even fear the report on HKMAO may signal a further hardening of Beijing’s Hong Kong policy.

But if the past four years have proved the “act tough” approach a failure, it makes better sense for Beijing to adopt a smarter tactic and more flexible approach to moderate the political atmosphere for a return to normalcy in the city under the “one country, two systems” experiment.