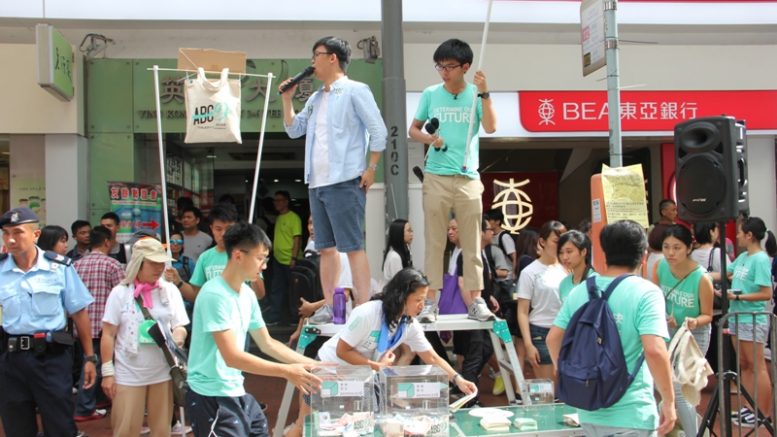 Joshua Wong of the Demosisto, also an Occupy Central student leader at this year's July 1 rally. He was denied entry into Thailand for a talk at university of the movement.

Featured on the cover story of the Time magazine for his role in the Occupy Central movement not long ago, student leader Joshua Wong Chi-fung hit international headlines again as he was sent back home from the Bangkok airport on Wednesday. Thai immigration officer said they were asked by Beijing to put Wong on the blacklist.

From the 1989 pro-democracy protest in Beijing to the Occupy Central movement in 2014, or Umbrella Revolution coined by some Western media, China has undergone seismic changes on the social and economic fronts. But the way the ruling communist authorities handles political dissent on the mainland and the Hong Kong SAR since Tiananmen, in particular in recent years, has been moving backwards.

That does not augur well for Hong Kong.

In the aftermath of the June 4 bloodbath, China banned a list of Hong Kong pro-democracy activists linked with the Tiananmen protests from entering the mainland. 27 years on, many of them are still not allowed to visit the mainland. If not for a degree of honouring to their own promise of “one country, two systems,” the Hong Kong dissidents, like many on the other side of the border, would have been locked up or kicked out to foreign countries.

With the wounds of the tragic Tiananmen killings not yet healed, the Chinese Communist Party has inflicted fresh damages to the hearts of Hong Kong people as they put a new batch of young leaders of the 2014 Occupy Central movement on their no-entry list.

In a sign of their hardened approach towards the Occupy dissidents, they have not just blocked their entry into the mainland, but to countries outside Hong Kong.

Having been banned from visiting Malaysia last year, Occupy student leader Joshua Wong was yesterday deported from the Bangkok airport. Thai immigration officials confirmed Wong was blacklisted at the request of the Chinese government.

The past few years also saw a list of activists or students who have been linked with the Occupy or students’ unions in local universities being blocked from visiting Macau and the mainland.

The writing is on the wall. The Beijing authorities have widened their ban for local political activists from entering the mainland and have put more pressure on some neighbouring friendly governments for them to prohibit the activists from visiting their places.

Beijing’s hardened stance stems from their fears about the growing agitations of the populace, in particular the younger generation, for a full democracy and greater autonomy, or even independence. Importantly, they also feel increasingly paranoid about what they perceived as the growing ties among the pro-democracy opposition forces in Greater China and some countries in the region.

They include Taiwan, Macau and the mainland, Malaysia and Thailand.

Put together with their deep-seated suspicion about the so-called hostile Western forces who are bent on toppling the communist regime through peaceful revolution, the Beijing leadership has increasingly viewed the rise of new, young political forces such as Joshua Wong’s Demosisto with scepticism and from a conspiratorial perspective.

Speaking before his departure for a trip to Thailand, Secretary for Justice Rimsky Yuen Kwok-keung said he did not believe Wong was denied entry into Thailand because of political pressure from Beijing. Yuen stressed that Hong Kong people should be abide by the relevant local laws when they visited other places.

Hours later, he was given a slap on his face for his political naivety. Thailand’s Prime Minister, Prayuth Chan-ocha, said Wong’s expulsion is China’s issue, not Thailand’s.

More ironically, Yuen’s advice for people like Wong not to breach laws in places they visit seems irrelevant. Wong could not have possibly broken the Thai laws before entering their country.

The feeble and nonsensical response of Yuen, the government’s top lawyer, to the Thai government’s act of stripping the lawful right of a Hong Kong resident, who holds a valid passport issued by them, to enter Thailand is yet another blow to the “one country, two systems” policy.

If Beijing remains perplexed about the growing feeling of separation among Hong Kong people, especially youngsters, towards the mainland, the latest plight of Joshua Wong is not the first, certainly also not the last case that says a lot of the harm being done by the communist regime to the feelings of people towards the country.