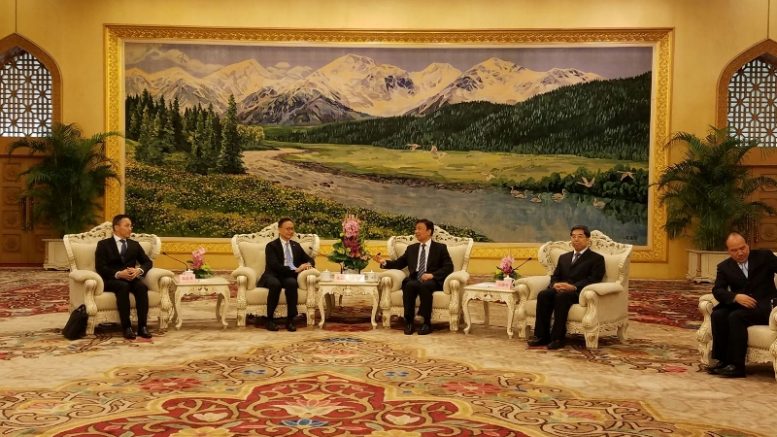 If anything, the praises of the leadership of Chief Executive Leung Chun-ying by Chinese Vice President Li Yuanchao (李源潮) in Beijing yesterday has poured cold water on the Leung-bashers who have hoped he would not be given a ticket to join the 2017 race.

Speaking at a meeting with a visiting delegation of senior government officials, Li spoke positively of the performance of the administration led by Leung. He said Leung has “steadily and safely” governed the city.

The policies rolled out to facilitate economic development and improve livelihood in various aspects including land and housing, elderly and anti-poverty work have achieved positive effects, he noted.

The central government, Li said, fully acknowledged the efforts they made and fully understood the difficulties they encountered. He called on the civil service to continue to govern effectively under Leung’s leadership.

Led by Secretary for Civic Service Cheung Wan-ching, the delegation was comprised of permanent secretaries of various policy bureaus.

On the face of it, the key message of Li given at his meeting with the delegation was to boost the morale of the fleet of civil servants at a time when the SAR government is under siege.

But with the jockeying for the post of the next chief executive entering a sensitive time, Li’s positive remarks on Leung’s leadership, in particular his comment on his “steady and safe governance (穩妥施政)” sounds intriguing.

Li’s positive evaluation says something about the major task given by the Beijing leadership to Leung in his governance. Be specific it means running the city in a steady and safe manner. It carries a meaning similar to the priority task of the ruling communist authorities in upholding stability (維穩) on the mainland.

To Beijing, Hong Kong has largely been stable under the “steady and safe” hands of Leung with progress made on some important economic and livelihood matters.

True, that does not mean Hong Kong is all well. There is no doubt the central leadership is aware of the intensity of public discontent towards Leung. But by and large, it is apparently clear Leung remains high on the list of Beijing’s choice of the next chief executive.

This is despite the fact that the assessment of the majority of Hong Kong people is the opposite of Li’s finding. All public opinion indicators, in particular surveys, show most people feel the city has become increasingly unstable and unwell since Leung took office.

Worse still, many of them fear Hong Kong will plunge into disorder if Leung is given five more years to run, or, in the eyes of his diehard critics, ruin the city. Their feeling of anxiety is the underlying sentiments of the advocates of ABC (Anyone but C Y), across different segments of the society.

Understandably, Li and other senior Beijing leaders could not possibly give a slight hint of dismay with the leadership of Leung, in particular in times of growing political sensitivity. Any remarks of the kind will certainly give rise to speculation about Beijing’s pick of the next chief executive.

Nor they would give high marks to Leung and a clear blessing to his re-election bid.

Apart from the fact that any anointment of the unpopular Leung is bound to spark a fierce public outcry, it has become clear Beijing seems to prefer not to shut the door to deny other hopefuls they deem acceptable from joining the fray.

The dilemma Beijing faces is clear, however. In face of Leung’s unpopularity and the strength of the anti-Leung force in the society, his chance of success in the March 24 CE election is low if Beijing allows a real contest.

Beijing appears to remain undecided about its election game plan. Judging from Li’s remarks, the chance of Leung given the green-light to run is high. But even if it turns out to be the case, that does not necessarily mean his second term is pocketed. The top post is still up for grab.