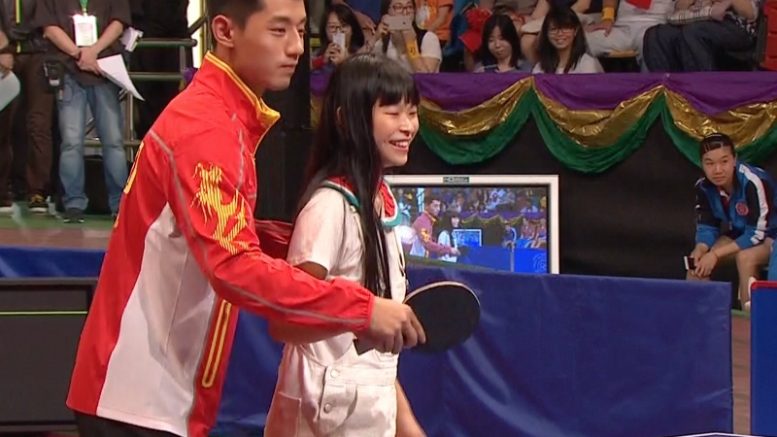 Close and afar. China's national table tennis Zhang Jike was giving more than a helping hand to a young audience at a friendship game on Sunday. The trip comes amid strained ties between mainland and Hong Kong caused partly by the rise of separatist sentiments in the society.

China’s Olympic star athletes charmed Hong Kong citizens with their brilliant skills and “never-give-up” spirit in their post-Rio Olympic trip to the city at the weekend.

Fears that the medalists would face boos and ridicule by radical groups during their visit had proved to be unfounded. From sports stadium and swimming pools to schools and elderly homes where they performed and visited, the delegation has won the hearts and minds of Hongkongers. News coverage of the visit by the media has been largely positive.

The air of warm feeling, harmony and joy in the interactions between the mainland athletes and the Hong Kong public contrasts sharply with the chilly wind of tension and confrontation blowing across the mainland-Hong Kong landscape in recent years.

Sharp warnings of alleged erosion of the Hong Kong system under the “one country, two systems” policy featured regularly at election forums of the ongoing Legislative Council election. Pessimists cited cases such as the Causeway Bay Books saga to warn of a more interventionist mainland government. The disqualification of six aspirants who were accused of promoting Hong Kong independence from joining the contest is another case in point.

Apparently taking the words of mainland officials against any talk of pro-independence in schools seriously, Chief Executive Leung Chun-ying and education minister Eddie Ng Hak-kim have warned such talk should be prohibited in campuses.

Admittedly, many people do not support Hong Kong independence, either as a matter of principle or in term of practical feasibility or both, many are adamant they should defend the right of people to discuss the issue of independence. That is part and parcel of the freewheeling Hong Kong society they feel proud of and cherish.

The stronger the pressure for them to shut up on the issue the fiercer the resistance against the order from the central and SAR governments for them to accept their destiny without making any qualms. Worse, the hardball approach by the authorities to try to eliminate pro-independence talk and thinking has widened the gulf between the mainland and Hong Kong.

Coming just about one week before the city’s voters go to ballot box, the charm offensive of the mainland star athletes orchestrated by Beijing and the Leung administration has, not surprisingly, given rise to speculation about its purpose.

One key message carried in the remarks of the mainland delegation was that Hong Kong people and the mainland people belong to a big family. Asked about the Hong Kong-mainland friction, charismatic swimmer Fu Yuanhui said: “(Hong Kong and China) are bonded by flesh and blood, and there is no reason to divide between them.” 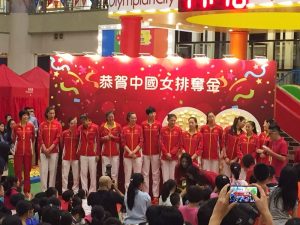 Making a stunning comeback to win the gold medal at the Rio Olympics after 12 years, the Chinese women volley team receive warm welcome from fans and residents at a shopping arcade on Sunday.

Cynics claimed the trip was aimed to moderate the political atmosphere ahead of the election, which could reduce the number of “hate votes” against candidates from the pro-establishment camp. Regardless of the authenticity of the theory, the practical impact of athletes’ visit on the upcoming Sunday election and mainland-Hong Kong relations is limited, nevertheless.

The overall ties between the sides will continue to be governed by a host of deep-seated conflicts in the “one country, two systems” political framework and specific issues including the issue of Leung’s re-election bid. That will be reflected on the Sunday balloting.

Like fireworks, the feeling of excitement and elation about the mainland Olympic stars is short-lived.

That said, it is important not to ignore the special bond between Hong Kong Chinese and those in the mainland as reflected in people’s warm and heartfelt welcome given to the athletes.

Due to historical and cultural ties and practical consideration, many people can see clearly independence for Hong Kong is not a real option. With the promises of preservation of their lifestyles, values and systems being honoured and respected, they would be happy to be part of the Chinese family.

Separation is the last thing they want or will contemplate when they found they no longer feel like being part of the family.

Be the first to comment on "Chinese Olympic stars warm city air, but for how long"