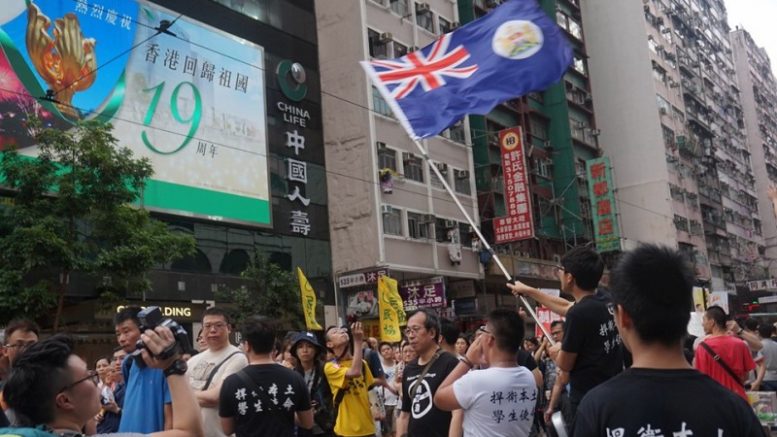 Chief Executive Leung Chun-ying wins Beijing's blessing in 2012 apparently because his hardline approach was preferred in times of turmoil. Will he win another five years for the same reason?

There are more signs of Chief Executive Leung Chun-ying and his team stepping up his re-election campaign that features an even more hardened approach in countering pro-independence thinking and political dissent in the city.

Yesterday, Leung likened discussion of the issue of pro-independence as such foul language as the four-letter starting with a “f”, which he said, like a list of “don’ts” in school rules, should be banned.

“School regulations could be harsher than laws… You won’t be taken to court if you speak foul language. But if you continue to do so in school after being repeatedly warned, you face expulsion.”

His remarks came one day after one of his close advisers, Fanny Law Fan Chiu-fan, has warned parents of students who attempted to raise discussion about Hong Kong independence might be summoned by their schools for a meeting.

Mrs Law, an Executive Council member, said schools should try to find out whether those students’ behaviour could be attributed to problems in their relations with their parents.

Earlier, teachers were warned they might be disqualified if they were found to have “promoted” pro-independence thinking in schools.

Leung and his team have resorted to tough talk against the spread of pro-independence ideas in schools at a time when the city draws nearer to three sets of elections.

Following the September 4 Legislative Council, the election of a 1,200 member-Election Committee, which will elect the next chief executive, will be held in November. The 2016 chief executive election is scheduled for March.

While claiming success in curbing a surge of property prices and easing poverty at the livelihood front, Leung seems to be determined to talk and act tough in tackling a list of highly-contentious political issues.

Taking the cue from the Central Government’s Liaison Office, the Leung team has indicated clearly their intention to block pro-independence thinking from entering schools.

Despite the fact that it may not be practically possible to ensure there is no discussion on the issue of Hong Kong independence whatsoever in schools, Leung is anxious to show to the Beijing leadership he has made his best efforts in battling against separatism.

By waging a high-profile anti-independence battle, he has risen the political temperature and arguably provoked stronger reaction from the pro-independence activists.

Dubbed as a “pseudo issue,” the question of Hong Kong independence has been turned, in a sense, into a real one for Leung to put high on his re-election agenda.

With pro-independence activism being portrayed as a serious threat to China’s sovereign right over Hong Kong, conservatives in the Beijing leadership are likely to prefer a tough and merciless leader like Leung to maintain order and stability in times of turmoil.

Aside from the challenge of the growth of separatism, it is also apparently clear the Leung team has tried to instil a sense of crisis in governance by arguably creating an enemy.

Speaking to the media on Tuesday, Secretary for Development Paul Chan Mo-po, a core ally of Leung, has attributed their governance predicament to attempts by unnamed force to seize governing power from them.

Referring to the governance difficulties, Chan said those problems could be defined and understood as “a battle for the right to govern.” Chan has declined to elaborate further, adding he would talk more later.

Chan’s claim about the root cause of their governance troubles is in line with the conspiracy theory prevalent among the conservatives in the central authorities about the problems in Hong Kong under the “one country, two systems” policy.

It bore resemblance to the political scene during the 2012 chief executive election period with Leung and his main rival Henry Tang Ying-yen representing two types of leaders. Whereas Leung was seen as a war-time leader, Tang was preferred by those who wanted a moderate figure to help defuse the political tension.

Compared with the pre-2012 political scene, the current political environment is even worse and more hostile. That does not necessarily mean, however, Leung’s hardball tactic stands to work, thus giving him five more years at the helm.

The simple truth is that that has proved to be a catastrophic failure in the past four year. The deeds and words of Leung and his allies recently show they are bent on playing up Beijing’s fears about separatism and seizure of governance power by hostile force to try to win their blessing for another term. Beijing faces the risk of five more years of turmoil if it decides to pick a war-time chief executive.