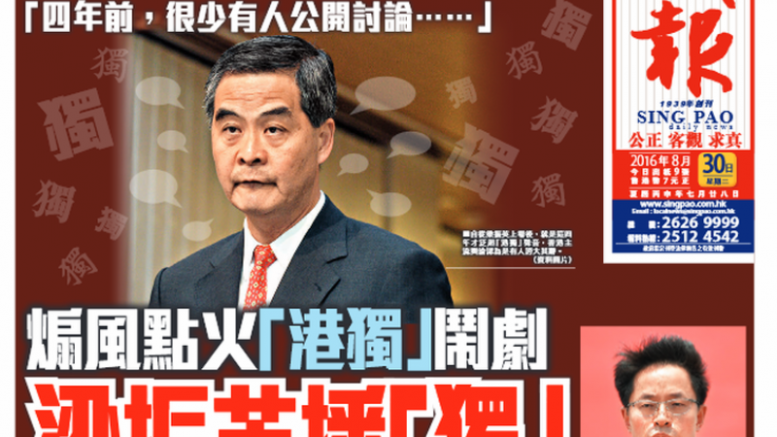 It is supposed to be a pro-establishment propaganda machine aimed at the pan-democrats. Sing Pao raises eyebrows when it launches attacks against Chief Executive Leung Chun-ying and the Central Government's Liaison Office.

Seen as a pro-establishment newspaper, the Chinese-language Sing Pao (成報) dropped a bombshell in the China-Hong Kong political landscape yesterday when it published a front-page commentary blasting Chief Executive Leung Chun-ying and the Central Government’s Liaison Office in Hong Kong.

The signed commentary, headlined “A farce of fanning ‘Hong Kong independence’, Leung Chun-ying sows seeds of independence,” comes days before the 2016 Legislative Council election scheduled for Sunday is held and at a time when the next chief executive election is entering a sensitive stage.

Results of the vote on Sunday are being seen as an important factor in Beijing’s decision on their pick for the next chief executive. Leung, who has indicated his hope for one more term shortly after he won the 2012 race, remains silent on his game plan.

Although there are no signs of the Beijing leadership dropping Leung from the list of candidates for the next CE election, at least for now, dissenting voices against his re-election bid have begun to surface in recent months.

In July, Tsang Yok-sing, the outgoing Legislative Council President and, perhaps more importantly, a political heavyweight in the pro-Beijing, pro-establishment circle, has declared he would run for the top post if no one came out to challenge Leung.

Tsang went further in an interview with a mainland online media this month he disagreed with Leung’s political approach towards the pan-democrats, among others.

Earlier, some pro-establishment political figures have launched the so-called ABC campaign, which stands for Anyone But CY.

Against the backdrop of the emergence of anti-Leung sentiments, the salvo of the Sing Pao commentary yesterday represents a full-scale attack against him, the Liaison Office and the forces behind them in the mainland.

“Leung has attempted to cement the governance authority of him and the hawks.”

It vehemently criticised the Liaison Office for acting as if they were the “mini-central government” in Hong Kong, handing out orders for people to give assistance to Leung in governing the city. “Over the past four years, a core interest syndicate was jointly formed by Leung and the Liaison Office. Not even a single word of negative comment about Leung from people in the political and business circle is allowed.”

The article attributed to the low morale of the civil service to Leung’s siding with the Liaison Office, creating “two nucleus of power” and “Western (Liaison Office) ruling Hong Kong.”

“If Leung is re-elected, the nightmare of Hong Kong will continue and the brand of ‘one country, two systems’ will be deformed.”

It said the community was looking forward to see the results of the inspection of the functions and role of the Liaison Office by the Chinese Communist Party’s Central Commission on Discipline Inspection.

The central authorities should dismantle the Leung-Liaison Office syndicate that has caused damage to the interests of Hong Kong and the nation, it said.

Judging from the background of Sing Pao and allegations made in the commentary, it is clear that the commentary is targeted at Leung, the Liaison Office and the leaders in charge of Hong Kong policy, namely President Xi Jinping and National People’s Congress chairman Zhang Dejiang.

Despite the fact that it has come just days before the Sunday election, the practical impact on the results may be limited. Put simply, it is not likely to change the voting behaviour of a large segment of voters towards one end of the political spectrum or the opposite side.

Voters who do not consider themselves as belonging to either pro-establishment or pan-democratic camp are not likely to swing to one side or another because of the Sing Pao commentary.

But by bad-mouthing Leung and the Liaison Office, the article could fan the anti-Leung and anti-Beijing feeling at the final days of the election campaign. It may drive more people to vote. The pan-democratic camp looks likely to benefit more from a higher turnout rate.

A strong performance of the pan-democratic force, in particular the localist and radical candidates, could be cited by anti-Leung force as evidence of his leadership and governance failure. That could hardly be argued as a case that helps boost Leung’s re-election bid.

With the Sunday election just a few days to go, pro-establishment media are supposed to target at the pan-democrats in the propaganda war in the city. That Sing Pao launched blistering attack against Leung and the Liaison Office signals an escalating political wrestling over the fate of Leung at the communist leadership.