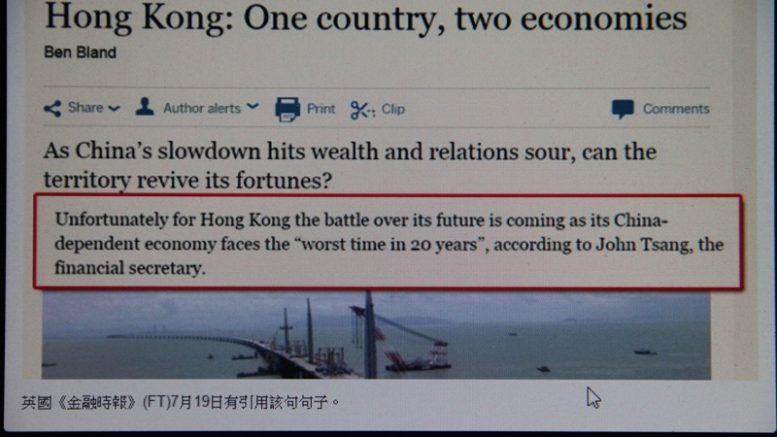 What the fuss about Financial Secretary John Tsang's alleged remarks saying the mainland economy faces 'the worst time in 20 years' is all about?

Political pundits should be forgiven for having over-read a statement made by Financial Secretary John Tsang Chun-wah yesterday, which is aimed to deny a report that quoted him as saying China’s economy faced the “worst time in 20 years.” Amid speculation about his candidacy in next year’s chief executive race, his move to set the record straight about the mainland economy could not be more intriguing.

Yesterday’s “no-story” story about Tsang could be traced back to his response to a question at a symposium hosted by the South China Morning Post in June. Asked about his views on the 2016 Hong Kong economy, Tsang said: “As Li Ka-shing mentioned yesterday, this is probably the worst time in 20 years for Hong Kong. I tend to agree with him, and I’ve been saying that for some time.”

His comment had not caused a big fuss at that time. Nor it had when the Financial Times quoted his remarks in a report on its website on July 19. The report, headlined Hong Kong: One country, two economies, reads: Unfortunately for Hong Kong the battle over its future is coming as its China-dependent economy faces the “worst time in 20 years,” according to John Tsang, the financial secretary. 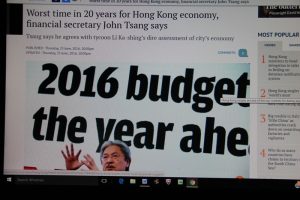 It became a different story, however, when FT’s Chinese website published a translated version of the report yesterday with one major difference. Instead of talking about Hong Kong economy, it quoted Tsang as referring it to the mainland economy. Apparently in view of the enormity of size of mainland netizens, Tsang could not take it lightly. Then came the rare clarification.

It was not the first time Tsang’s opinion on the mainland economy has hit headlines. In his report on the Hong Kong economy at a session attended by the visiting National People’s Congress chairman Zhang Dejiang, Tsang had whipped up a controversy when he reportedly weighed in the outlook of the mainland economy.

Quoting anonymous sources, a Chinese newspaper column wrote Tsang’s observations about the Chinese economy were rebuked by Zhang, who was said to have expressed dismay with Tsang’s performance. The report has sparked rebuttals in some Chinese newspaper columns, which backed Tsang, saying he merely gave a more detailed analysis on the state of the Chinese economy. Also quoting unidentified sources, the reports claimed Tsang’s briefing to Zhang and the latter’s response had been distorted. They hinted at smearing tactic adopted by Tsang’s rival, or more explicitly, “Leung Chun-ying’s men.”

The truth of the session remains unclear. What appears to be certain is that the so-called “Cold War” between Leung and Tsang, or their allies, to say the least, has become more open.

With the scene of the Leung-Tsang rivalry set, political watchers have been reading into the deeds and words of the pair in the recent months, highlighting their differences in philosophies and approaches.

On political issues such as localism and pro-independence sentiments, Tsang has adopted milder rhetoric, which contrasted sharply with the harsher criticism made by Leung.

Clarification is targeted at mainland audience

But when it comes to the mainland economy, Tsang seems to be keen to clarify he is largely bullish about the nation’s economic health. 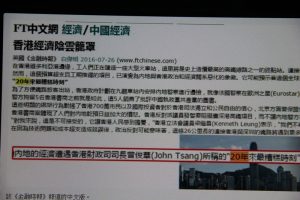 In yesterday’s statement, he tried to play down the downside of the mainland economy. He said: “All the major economies around the world, including the mainland, are facing downward pressure.”

Tsang was quick to add there are a lot of positives. “It (the mainland economy) is still the major driving force of the global economy and has contributed more than a quarter of global economic growth.”

The mainland’s economy is fundamentally sound and that the authorities have sufficient policy room to deal with future challenges, he said.

Although the possibility of Tsang joining the fray is no longer remote, he was still tight-lipped and gave no hint of his intention to do so.

He may be happy to keep his supporters and opponents guessing. But on the outlook of the mainland economy, Tsang is anxious not to be seen as a sceptic, if not doomsayer, of the Chinese economy. That is a message he is keen to convey to the mainland authorities in yesterday’s statement.