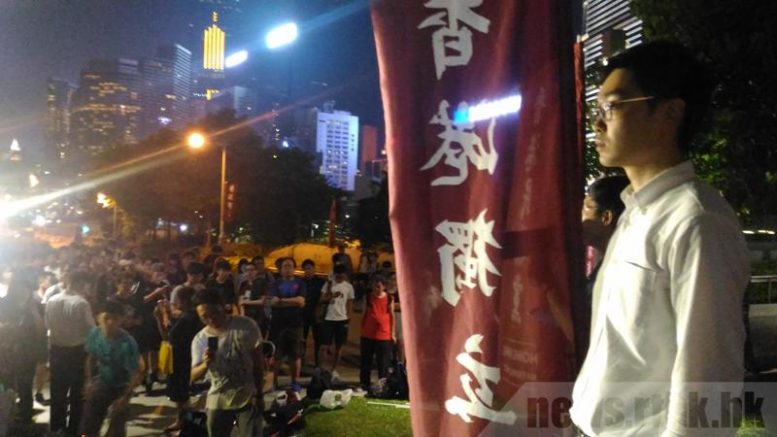 Chan Ho-tin of the Hong Kong National Party is not allowed to sit on the upcoming Legco election. Election officials cite his advocacy for Hong Kong independence as reason for the invalidation of his application.

Shocked and awed by the better-than-expected votes grabbed by pro-independence localist Edward Leung Tin-kei in a Legco by-election and the inauguration of the Hong Kong National Party, Beijing has tried to mute pro-independence voices in the new legislature and the ongoing election campaign.

Then came the surprise new election rule published by the Electoral Affairs Commission (EAC), a supposedly independent election watchdog, through the Government’s Registration and Election Office two days before the nomination period began on July 16.

Contestants are asked to sign an extra form, known as confirmation note, to declare their acknowledgement of three Basic Law provisions, including Article 1 that says Hong Kong is an inalienable part of China. Putting aside its legal technicalities and complexities, the new rule is clearly aimed to install a political device for kicking out aspirants the authorities branded as “pro-independence” advocates.

By the time this article is finished, two applicants have been disqualified. Chan Ho-tin of the Hong Kong National Party was told by the EAC his application had been invalidated. Another applicant was disqualified for failing to complete the original declaration of upholding the Basic Law. Speculation is rife that more deemed as separatists will be denied of their right to stand for the September 4 poll soon.

Although the EAC decision on Chan Ho-tin looks set to be challenged in courts, the central and SAR governments can claim success in blocking the separatists from entering the ring.

According to anonymous sources close to the authorities quoted in some Chinese press, kicking out the separatists could stop them from using the ongoing election campaign period and, if elected, the Legco Chamber , as a political platform for them to propagate pro-independence thinking. Another line of argument is that it will cut off their source of donation for their campaign.

Speaking at a forum last month, head of the Liaison Office’s legal affairs department, Wang Zhenmin, said the new rule was necessary for the city’s long-term peace and stability.

In a sense, such political tactic of muting political dissenting noises seems to have worked in the mainland. The voices of dissident lawyers who have campaigned for the protection of right safeguarded in the Chinese Constitution have been muted through arrests.

It is proved to be counter-productive, to put it mildly, or, bluntly say, highly destructive to the city’s much-cherished values and systems.

Conservatives in Beijing might feel panicky when they read a recent survey conducted by a Chinese University of Hong Kong institute, which shows more than 17 per cent of respondents support independence. 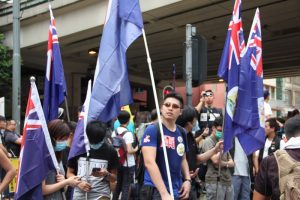 The fact is that it is overly simplistic and grossly misleading to draw a conclusion that candidates who advocate independence stood a decent chance to get a seat in Legco’s geographical constituencies. Infighting among different factions ranging from localists, pro-independence activists to radical pan-democrats could mean votes are evenly split with all ended up being losers.

Analysts generally considered the chance of Chan Ho-tin, if he gets the candidacy ticket, as paper-thin.

Even if, a big if, he does win a seat, his deeds and words will be subject to Legco rules. The scenario of him turning Legco into a platform of pro-independence movement is unrealistic. Furthermore, who cares or seriously listens to what lawmakers said at Legco?

True, Chan lost his bid for a Legco seat. But he gained publicity for his pro-independence thinking and bashing against the EAC and the mainland and SAR governments.

The fury of supporters and sympathisers of Chan and other pro-independence candidates will ignite their feeling of defiance and resistance against the authorities, prompting more to come out to cast their votes.

The blatant attempt to change the election rule to screen out certain candidates may back-fire, giving a helping hand to the pro-independence and like-minded candidates for them to cement their support base, to say the least, and gain extra support for being suppressed by the authorities.

Seen from different perspectives, Beijing is set to lose on all fronts. Unless all pro-independence applicants are being disqualified, the possibility of any one of them grabbing a seat cannot be ruled out.

The host of issues surrounding independence and the confirmation note will no doubt feature prominently in the election campaign. Like it or not, the noises and voices of Hong Kong independence will not be eliminated in public debate.

Worse still, Beijing’s obsession with the principle of “one country” and the suspicion of them moving the goal post in the city’s election rule and system will cause more damage on public faith in “one country, two systems.” That will deepen the feeling of alienation from the mainland in the society, prompting more to feel fantasied about the idea of Hong Kong independence.