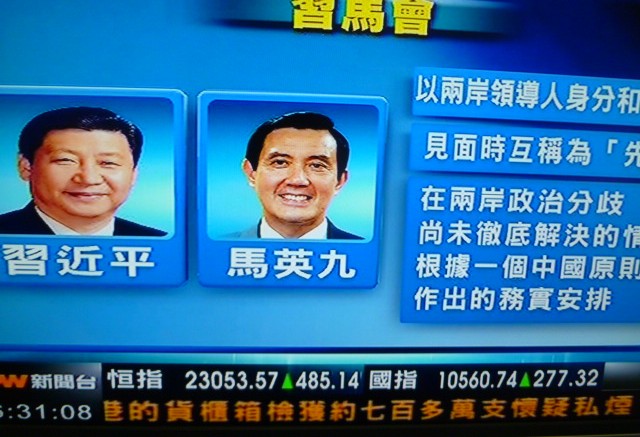 Billed as the first encounter between the two leaders across the Taiwan Strait after 1949, the meeting between Chinese President Xi Jinping and Taiwan President Ma Ying-jeou in Singapore on Saturday will be long in symbolic meaning but probably short when it comes to substantive significance, at least in the near term.

Barring unexpected words and surprise policy initiatives delivered by Xi at the weekend talk, the meeting, reported to last about one hour followed by a dinner, is unlikely to change the result of the Taiwan presidential election scheduled for January.

With his second term just a few months to go, it is also unlikely Ma will alter his mainland policy and strategy at the end of the session. Nor it will make any immediate impact on the troubled relationship.

That said, both Xi and Ma are keen to shake hands to reaffirm their present mainland-Taiwan policy featuring peace, moderation and exchanges at the economic and social levels is on the right course at a time when ties are approaching a phase of uncertainty.

Despite the fact that Tsai has repeatedly pledged she has no plan to change the status quo, Beijing will no doubt greet her words with scepticism, if not cynicism in view of the pro-independence stance of the DPP.

Moreover, the feeling of distrust and doubt about the rapid pace of mainland-Taiwan economic ties as shown in last year’s students-led protest against a cross-Strait trade pact says a lot about the undercurrents in the relationship.

The aspirations and needs of the young generation in Taiwan in times of profound changes in cross-Straits relations could emerge as a big unknown factor in the island and in its ties with the mainland.

In the face of a likely long period of uncertainty in relations, the fact leaders from both sides meet and talk will make a breakthrough, albeit merely in symbolic term, in history. It will make history even though it may follow by a eight-year-long reign under the pro–independence DPP.

Now that the KMT is trailing the DPP in the presidential race, both leaders would be cautious not to cause more harm to Chu’s campaign in their talk.

No agreement, no joint statement

Officials from both sides said there would be “no agreement, no joint statement” from the meeting. The pair will call each other “Mister.” Those arrangements are clearly aimed to keep adverse impacts of the meeting to the minimum among the Taiwan populace.

It is inconceivable that Xi will talk tough with reference to such remarks as “the use of force” in his talk with Ma. As veteran China analyst, Willy Lam, said at a current affairs programme at DBC on Wednesday, Xi “will play the economic card and try to show goodwill” to the Taiwan people.

Lam said Beijing should not be too worried about Tsai even if she comes to power. “(Her party predecessor and former president) Chen Shui-bian is an adventurer, a gambler. But Tsai is a totally different person. She’s more calm… More importantly, Taiwan’s capability of going independence has been severely weakened, in particular in term of economic power.”

Xi is also not likely to make drastic change in Taiwan policy in his first five-year term, he said. Lam said the communist authorities have not set any timetable on re-unification. But he added Xi seems to have become more wary about the scenario of Taiwan and Hong Kong being used by hostile foreign forces to cause trouble to China.

Be the first to comment on "Xi-Ma talk long in symbolism, short in substance"