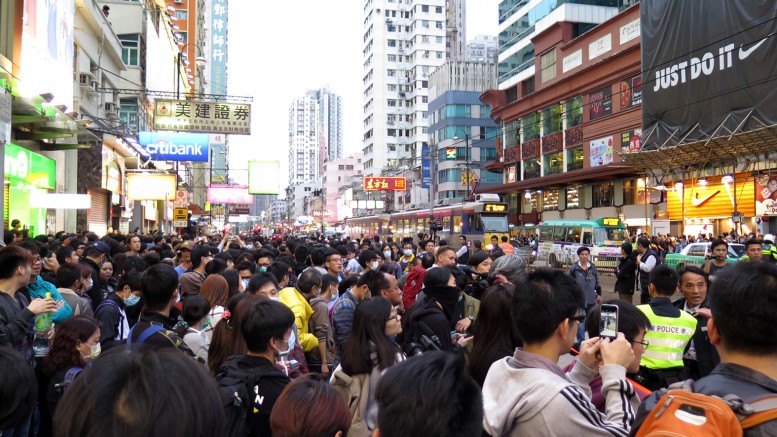 A protest against parallel goods traders in northern Sheung Shui on Sunday, the first of its kind since March, has provided a convenient excuse for the Government to shift the blame of a fall in tourism and retail business onto the protestors.

He warned those protests have and would seriously dampen the mood of visitors coming to Hong Kong. So claimed the jobs of more than 343,000 people in the retail sector and another 239,000 in the catering business would be adversely affected.

Hong Kong’s image as a city friendly to visitors, he said, would be tarnished.

Those protests, So has argued, would cancel out all the efforts of the government in luring visitors to come to the city.

Their remarks came after the release of latest government figures that showed a marked drop in the number of mainland visitors and retail data, feeding fears among the retail sector of the imminent arrival of a cold winter in term of business. Last week’s press reports about companies beginning to cut their number of staff have added further gloom to the sector.

Claiming the retail sector is facing a situation worse than the Sars epidemic period in 2003, legislator representing the sector Vincent Fang Kang has put pressure on the government to act to avert the crisis. He suggested lifting the “two-can” milk powder restriction and that, among other measures, the Chief Executive should make an apology for the “tourist-unfriendly” behaviour of protestors to mainland people.

There is no denying the footages of some ugly protests against illegal parallel traders and mainland visitors that have spread like virus in social media have damaged the city’s image among mainland people.

But it is also clear that those protestors targeted at specific activities of mainland visitors such as parallel goods trading or snapping up of infant formula, not against the visitors per se.

It is ironic, therefore, the protestors-bashing comments by Leung Chun-ying and his senior aides such as Greg So and Cheng Yiu-tung might have become counter-productive. They have poured oil to the fire.

Worse still, putting the blame on those protestors only gives an easy way out for the government not to tackle the difficult and deep-seated problems that are more important and relevant in the decline of tourism and retail business.

Hong Kong boosts itself as a city with rule of law and freedoms. The best assurance to visitors from the mainland and elsewhere is that they will be protected by laws. Any protests that have gone beyond the parameters of law will be dealt with in accordance with the law. No more. No less.”

Be the first to comment on "Parallel goods trade protestors blamed for tourism, retail downturn"