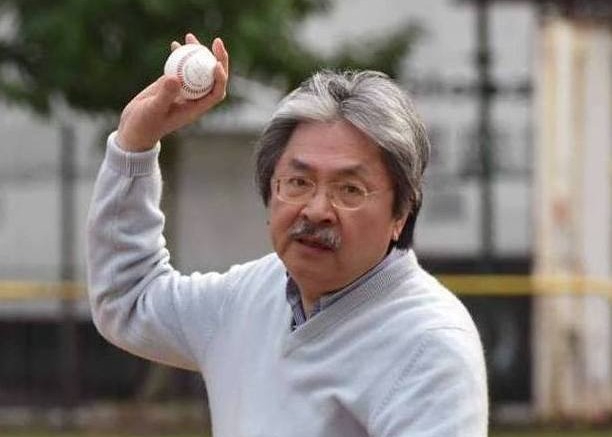 At the Mong Kok Stadium Tuesday night, Hong Kong was defeated by Qatar in a World Cup qualifier match. Outside the pitch was a different match. In a contest of the hearts of soccer lovers and the public at large, Financial Secretary John Tsang Chun-wah has humiliated his boss Chief Executive Leung Chun-ying with a convincing goal.

Though better known as a fencing-lover than a soccer fan, Tsang has demonstrated a close touch on the pulse of the society, sharing with his feeling of pride and giving a pat on the shoulders of the city’s team in the past few days.

On the eve of the Hong Kong-Qatar match on Tuesday, the financial chief praised in his blog the outstanding performance of goalkeeper Yapp Hung-fai, more widely known now as “Hero Fai” after his role in frustrating the Chinese national team in goalless qualifier match in Shenzhen last week.

He walked the talk on Tuesday night to lend his support to the Hong Kong team. The face of his Facebook page was replaced by a picture of the Mong Kok Stadium. On his page were a bunch of pictures of the match and the crowd. His posts received tens of thousands of “likes” and “shares” by his friends/fans.

Leung is not known as a lover of sports. Indeed, his earlier remarks that questioned the contribution of sports to the economy have caused a stir among the sports community.

Still, Leung knew he had to embrace sports to fight back for the lost ground in the battle for the hearts of people over the Hong Kong soccer team soon after the whistle at Mong Kok Stadium was blown.

In a blog posted late Tuesday night, he heaped praises on the Hong Kong team for demonstrating the “never-give-up spirit of Lion Rock”. He was silent on the Shenzhen soccer match between Hong Kong and the national team.

In an apparent public relations exercise aimed to show Leung’s care for the Hong Kong team, an article published in the government-friendly Sing Tao Daily on Wednesday said, without quoting sources, Leung has always been concerned about the team.

Even though he was not able to attend the match because he had to host a banquet at the Government House on Tuesday, the press report said Leung had asked his press spokesman Fung Wai-kwong to watch the live broadcast of the match at home – and to give live reports of the latest result to him.”

Leung might have got consolation points in terms of media coverage from his late-night blog. Most newspapers have carried his remarks on blog in their reports on Wednesday.

But thanks to the power of social media and television live broadcast, John Tsang has capitalised on the zeal of Hongkongers over their soccer team to further strengthen his image as a leader of the people.

Much has been said about the Hong Kong society beset by worsened divisiveness caused by differences over a slew of political, socio-economic issues.

Chants of the slogans “We are Hong Kong,” “Hong Kong fantastic” at the Mong Kok Stadium testified to the sense of unity and common purpose of the society.

In many aspects, John Tsang is not a charismatic leader, nor a leader whom people like to love with no reason. That he has continued to get the Number One rank in popularity ratings in opinion polls has not come without reason. A show of togetherness with the people and a sense of care about what people think and talk help shed some light on his popularity.

It is not immediately known who the VIP/s was at Leung’s party on Tuesday night. His decision to be a good host at the Government House rather than a supporter of the Hong Kong soccer team seems to be an opportunity lost for him to get closer to the people.

He may be booed and bullied if he joined the crowd at the stadium on Tuesday. But as the saying goes: no pain, no gain. Like our soccer team, you need to fight to the last minute to win support from the people – if you still really care.”