Pillar of Shame under renovation. Picture from aidoh.dk.

The fate of the Pillar of Shame erected at the University of Hong Kong is in the balance. Its removal from the campus, however, is not a question of if, but when. That is a shame.

The eight-metre-high sculpture by Danish sculptor Jens Galgschiot remembering the victims of the Tiananmen Square crackdown found the city’s leading university its home in 1997.

That it stood at the heart of the campus since then is one of the symbols of the “one country, two system” policy in post-colonial Hong Kong, under which freedom of expression is allowed and university autonomy is preserved, among other promises.

For 22 consecutive years after 1997, Hong Kong was the only place on Chinese rule where public commemorations of the June 4 killings were allowed. In 2020 and 2021, Police had rejected applications for the annual June 4 candle-light vigil at Victoria Park, citing the pandemic.

The Alliance, formed in the heyday of the 1989 Beijing student-led movement, organised the annual vigil. It had set up a June 4 museum, which is now left vacant and items seized by national security officers.

The Alliance decided to disband in August after its leaders were arrested. They are charged with acting as “foreign agents”, a crime deemed as collusion with foreign forces under the national security law.Last week, HKU management informed the group it had until Wednesday (October 13) 5 pm to remove the 2 tonne artwork or else it would be deemed abandoned. The university said the move was based on its assessment of legal risks in light of the Alliance’s disbandment.

The sculptor said he owns the artwork, which was on permanent loan to the Alliance. A liquidator of the Alliance Richard Tsoi told the university they should talk to Galgschiot directly.

The university said in a statement they were seeking legal advice and working with related parties to handle the matter in a “legal and reasonable manner.” It has not specified what the legal risks are.

On the face of it, the display of a June 4-related artwork in a university campus does not pose a threat to national security. How can a statue commemorating victims who lost their lives in and around Tiananmen Square possibly endanger national security? If yes, how?

If the logic is applied, any June 4-related artwork, books and photos, drama and shows should have been banned. And if this is so, the Government should say it clearly and loudly – publicly.

As of now, no government officials have said publicly the display of the artwork could face prosecution. Nor there had been vocal calls from certain quarters of the society for removing the statue from the campus.

A plausible explanation of the university management’s ultimatum is that it is an act of political self-censorship being disguised as “legal risks” in the midst of pressure, both real and perceived, for universities to make utmost efforts to uphold national security.

It is perceived because there has been no clear warning by officials of the legal risks of keeping the statue at the campus. 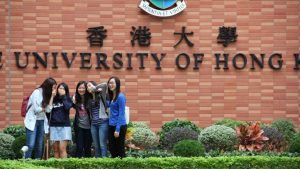 A fine balance needs to be struck between national security and freedom of expression. It is of added importance in universities, where the pursuit of truth of knowledge, the debate and expression of ideas and feelings could only be possible under a free environment.

The statue has caused no harm to students, the university and the society in the past 24 years, arguably not even embarrassment. The opposite is true. It has signified tolerance and inclusiveness and respect to history on campus, which is something everyone should take pride in.

That the Pillar of Shame looks certain to be removed amid an air of fear in the city’s top university is a shame to the 1911-founded university and Hong Kong as a whole.