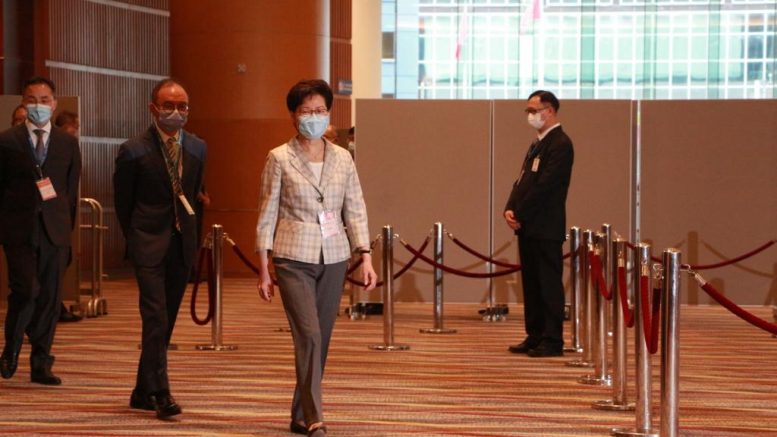 In a sense, it is coincidental that the first of the three sets of landmark elections in Hong Kong in the next eight months and the announcement of the imminent disbandment of the city’s largest independent union fell on the same day, or Sunday (Sept. 19).

Today’s 2021 Election Committee election was picked after a revamp of the election system stipulated in the Basic Law, which was promulgated in 1990 and implemented in 1997, was passed by a depleted legislature in May.

The Sunday press conference held by the Hong Kong Confederation of Trade Unions (CTU) came after its executive committee, now with only four members, decided to kickstart the process of disbanding the union at a meeting on Thursday.

That the election and CTU announcement took place on the same day, however, is not a coincidence in a sense.

The Sunday polls, in which police officers outnumbered the tally of voters, marked the beginning of the era of “patriots administering Hong Kong” . It followed a troubled, if not failed, experiment of the model known as “Hong Kong people running Hong Kong” in the past 24 years.

Under the new “patriots” game, only those deemed by Beijing as “true patriots” will have a role in administering the city. Those being branded as “anti-China” and trouble-makers will not just be barred from joining the Legislative Council and the District Council and the 1,500-member Election Committee, but face harsh political reprisals.

Civil society groups, in particular trade unions, have emerged as the next targets after pro-democracy political parties and groups were eliminated one after another.

The Professional Teachers Union, the city’s largest teachers’ body, is in the process of winding down. The Hong Kong Alliance in Support of Patriotic Democratic Movements in China, currently under investigation for alleged violations of the national security law, has been struck down from the Companies Register upon an order by the Secretary for Security.

The list of smaller groups, which have moved to disband after July last year, is much longer. 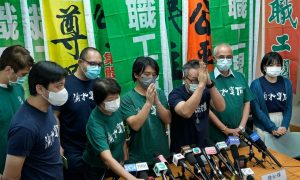 Founded in 1990 by a group of veteran independent labour unionists, the CTU became the last big pro-democracy body to fall as Beijing intensified moves to mute organised dissenting voices in the society.

Even groups with a much smaller number of members and practically limited substantive influence in governance are beginning to feel the heat.

The Hong Kong Journalists Association is an example. Taking the cue from and mimicking the script of security minister Chris Tang, Police Commissioner Raymond Siu on Saturday accused the HKJA of being “unprofessional”, politically-biased.

Among other accusations, the pair claimed HKJA had jumped out swiftly to condemn acts of violence against the now-defunct Apple Daily, but refrained, or refused to do so when pro-establishment media were the subject of violence.

A HKJA statement issued on Saturday documented some of their previous statements on condemnation of acts of violence and/or obstruction of the work of journalists from media outlets including Ta Kung Pao and TVB.

Although the blitz of verbal attacks by Tang and Siu do not hold the water, they are enough to provide the much-needed ammunition to pro-Beijing media outlets and political figures to lambast the journalists group.

Not surprisingly, the intensity of attacks is increasing – and being elevated to the level of national security. Evidence, though, is lacking.

The fate of HKJA is unclear. But the new socio-political landscape of Hong Kong after Beijing enacted a national security law and re-fixed the election system is increasingly clear.

In an interview with an online media outlet, Lau Siu-kai, vice-president of the semi-official Chinese Association of Hong Kong and Macau Studies, said the room for mass politics will be drastically reduced. The stage of “elite politics” will be further expanded for patriots to run the city, he said.

Professor Lau envisaged the building of a ruling coalition composed of patriots from different sectors.

His association, which is directly under the State Council’s Hong Kong and Macau Affairs Office, plays the role of adviser and think-tank to the central government. After policies are rolled out, he and association members will help give support and explain them to the public, he said.

24 years after the end of colonial rule with like-minded elites handpicked by the British Hong Kong administration to back the regime, post-colonial Hong Kong is moving backwards to elitist rule in a different kind – with patriots in, democrats and civil society groups out.

(Chris Yeung was Chairman of Hong Kong Journalists Association between July 2017 and June 2021. The views expressed are his own.)

Be the first to comment on "Patriots in, democrats out as HK enters new era"