Defying an order from Hong Kong’s national security police, a pro-democracy alliance said on Sunday they will ignore the police’s request for their financial and operational information for a case that they say has no ground. They have a point.

And seen from a historical perspective, it could not be more ironic, and laughable, that the alliance, whose full name is Hong Kong Alliance in Support of Patriotic Democratic Movements in China, is facing accusation of acting as a “foreign agent”, one of the crimes stipulated under the national security law.

Ending months of speculation that the arm of the national security police would soon reach the Alliance as part of a crackdown against pro-democracy groups after the law is in place, the police wrote to the Alliance last month, demanding a list of information by Tuesday (Sept 7).

The police cited paragraph 5 of Article 43 of the sweeping legislation.

The provision says the police chief may demand that information if the Commissioner of Police “reasonably believes” that it is necessary for the prevention and investigation of an office endangering national security.

The authorities did not explain why the Commissioner “reasonably believes” the Alliance has committed acts of endangering national security.

In the Sunday press conference, the Alliance’s vice-chairman Chow Hang-tung said: “If you must say that we were agent of anything, we’re agent of Hong Kong people’s conscience – not the agent of any national interest of any country.”

She accused the police of abusing their power, saying the information request was “clearly a fishing attempt to construct stories and conspiracies” against civil groups, to invoke fear.

Founded in the heyday of the pro-democracy movement spearheaded by Beijing students in spring 1989, the Alliance is an umbrella body comprising a long list of the city’s social groups. Most of their members had pulled out since signs of a crackdown surfaced.

Inspired by the courage and persistence of students and civilians in Beijing and held out hopes for a more democratic and open China in 1989, Hong Kong people from all walks of life took to the streets to support Beijing students.

When PLA tanks rolled into Tiananmen Square and blood was shed on the night of June 4, Hong Kong people, including prominent pro-Beijing figures, joined condemnation against the bloody crackdown.

On every June 4 since then, Hong Kong people attended the annual candle-light vigil organised by the Alliance at the Victoria Park commemorating the victims and reaffirming their hopes for a vindication of the June 4 verdict, an end of the one-party dictatorship and the pursuit of responsibilities of the killings, among others.

During the June 4 vigil, volunteers collected donations from participants, sold a raft of June 4-related items such as T-shirts and calligraphy works of the Alliance’s founding chairman Szeto Wah to help pool funds for their work.

An annual finance report of the Alliance was published on the pamphlet of the vigil.

As soon as the vigil ended, normally around 9.30 pm, participants joined volunteers to clean up the football fields at the park. 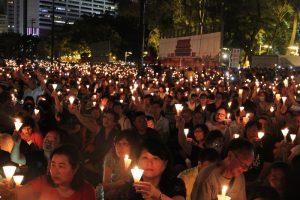 The vigil had been ridiculed by cynics as “ritual” with no meaning. With mainland-Hong Kong tension grew and localist sentiments surged, the Alliance’s call for a democratic China, one of their five manifestos, was criticised as “leftard”, or unrealistic pro-China thinking.

For many Hongkongers who had gone through the journey of the ill-fated pro-democracy movement spearheaded by the Alliance in the past three decades, the police’s accusation of the Alliance being a “foreign agent” has defied their knowledge, understanding and experience.

To say those tens of thousands of people who paid tributes to the June 4 victims on every June 4 as part of a plot by a “foreign agent” aimed to endanger national security is an insult to their conscience, to say the least.

It has distorted the history of a movement launched by Hong Kong people with a sense of identity with the nation and empathy with Beijing students. Their hopes for a democratic China have kept lighting up the Victoria Park on every June 4 until after the national security law took effect.

It looks likely the Alliance will now be taken to court for their refusal of a police order, if not formal charges of colluding with foreign forces on ground that it is allegedly a foreign agent. Whether they will be convicted is unclear.

But the people have given their verdict: its full name read Hong Kong Alliance in Support of Patriotic Democratic Movement in China.