Gloom and doom refuses to go away as Hongkongers say goodbye to 2020.

After months of turmoil sparked by an extradition bill in summer, many people felt tired and exasperated. They felt what happened sounded unreal and were unsure about what the future held. The only certainty for 2020 was uncertainty.

Events unfolded in the city and around the world since then have shocked and rocked everyone.

Battered by the aftershocks of the socio-political unrest and the Covid-19 pandemic, Hong Kong was torn into pieces in many aspects, namely politics, economy and society.

The “one country, two systems” is critically ill, if not already dead.

Make no mistake. This is not because of claims made by the Chinese Communist Party leaders and their subordinates (the Carrie Lam administration included) that the democrats, or anti-China forces, had colluded with foreign hostile powers to lead the city towards self-destruction.

There are some truths to say the months-long social unrest had taken its toll on the economy and social harmony.

But the wounds to Hong Kong grew worse to become collateral damages largely because Beijing had and is still making serious mistakes and misjudgments and disproportionate and damaging responses.

The worst political turmoil since the 1967 Riots could not come at a worst time with the novel coronavirus, also known as “Wuhan virus”, ruining the world economy. Hong Kong was no exception. Economic recession set in. Unemployment neared seven percent. Deficit hit a record HK$300 billion.

There are no signs of an early end of the fourth attack, not to mention a containment of the spread of the deadly virus.

Undoubtedly, it will take a year or two, or even a much longer period of time, for the economy to return to a healthy footing with Covid-19 being brought under control here and around the world.

The damages to the fundamentals of the city ranging from such institutions as the judiciary and civil service, sectors including the education and media to the rule of law system and civil liberties are far more difficult to be repaired, nevertheless.

Worse still, the wounds may never be healed.

Based on misjudgment and misguided advice from hardliners in Beijing and the local pro-Beijing circle, the party leadership made a fatal mistake in imposing a national security law on Hong Kong through its rubber-stamp legislature, officially known as National People’s Congress Standing Committee.

The law, which took effect on July 1, gives enormous powers to the national security teams to suppress what they deem as threats to national security with limited checks and balances by the judiciary and the legislature. 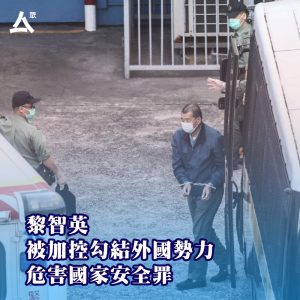 The recent intensified pressure for the local court not to grant bail to Next Media’s owner Jimmy Lai mounted by political heavyweights including former chief executive Leung Chun-ying and pro-Beijing camp and mainland media is a case in point.

If local court fails reverse an early court decision to grant bail to Lai on Thursday, the central government is urged to step in to send Lai to the mainland for trial, claiming that Lai has posed a serious threat to national security through colluding with foreign government,

Doing so could deal a devastating blow to judicial independence and the high-degree autonomy given to Hong Kong under the Basic Law.

Armed with the national security law, Beijing’s is determined to tighten control over Hong Kong in almost all aspects of life in the city.

Following the disqualification of four pro-democracy lawmakers that triggered a mass resignation, next on the line of political purge will be the pro-democracy district council members. The game plan is to knock any democrats who could pose any real opposition to the authorities out of the two-tier structure.

The crackdown on dissenting views is widening to non-political sectors. All civil servants are required to sign an oath of allegiance to the Basic Law and the SAR. Education will be revamped to put more emphasis on the grooming of younger generations who are more obedient, not critical and independent minds. Media is under growing threats of being silenced. All efforts will be made to weaken the civil society for authoritarian rule.

In many aspects, 2020 is a year of loss. Seeking to gain full control of Hong Kong, Beijing is losing Hong Kong. The much-cherished strengths and values of Hong Kong are diminishing. China will be the biggest loser with the imminent loss of a unique, vibrant city.

This article was first published on Apple Daily website on December 30, 2019.