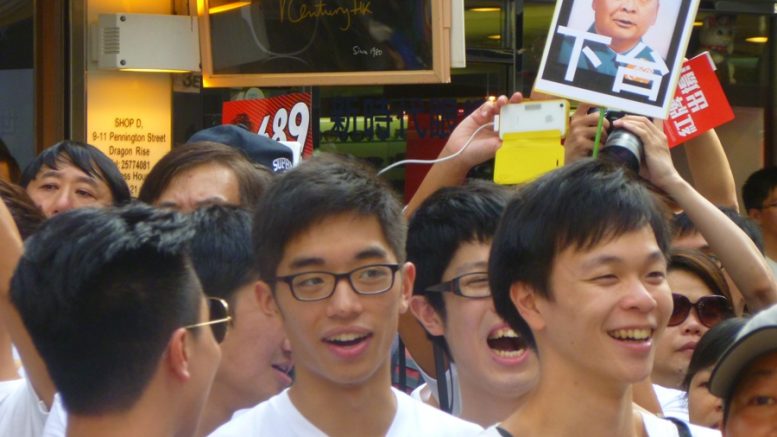 Chief Executive Leung Chun-ying sends a Christmas present to his critics and opponents. He says on December 9 he will not seek re-election, a plea featured in mass rallies since he takes office.

Flashed back to November 8, 2014, Day 42 of the Occupy Central movement. Chinese President Xi Jinping highly praised Chief Executive Leung Chun-ying when they met at the margins of a Asia Pacific Economic Conference (APEC) summit in Beijing. Borrowing a Chinese poem that says “strong wind tests the strength of grass,” Xi said Leung was proved to be a leader they could rely on at critical moments. On the same day, former chief executive Tung Chee-hwa launched think-tank Our Hong Kong Foundation, saying one priority task was to tackle the difficulty and aspirations of young people.

Fast forward to 2015, political reform blueprint was vetoed. Leung recommended the sacking of four principal officials. They are the then Financial Secretary John Tsang Chun-wah, Secretary for Commerce and Economic Development Greg So Kam-leung, Home Affairs Secretary Tsang Tak-shing and Secretary for Civil Service Paul Tang Kwok-wai. Beijing accepted the removal of Tsang Tak-shing and Tang, but kept John Tsang and So. In November, the rise of the “post-Umbrella soldiers” in the 2015 District Council polls has reflected people’s growing clamoring for change. And they believe, as shown in the success of some young hopefuls in the polls, change is not impossible. 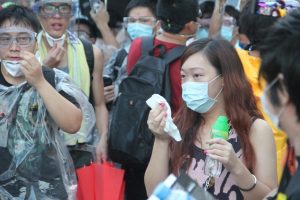 Come 2016, a dispute between police and civilians in the evening of the first day of the Lunar Chinese New Year (February 8) in Mong Kok escalated into the worst clash between government and people since the 1967 Riot. The Government immediately labeled it as “turmoil.”

CitizenNews understands that Xi has ordered four key members of the Communist Party’s Leading Group on Hong Kong affairs to find out what happened in Hong Kong by the beginning of 2016. The four are National People’s Congress (NPC) chairman Zhang Dejiang, who is the group leader; Vice President Li Yuanchao; State Councillor Yang Jiechi and Wang Guangya, Director of the State Council’s Hong Kong and Macau Affairs Office.

On December 9, Leung announced he would not seek re-election, citing “unbearable pressure” on his family. It is understood that a high-ranking official from Beijing informed Leung Beijing’s decision of not backing his re-election bid. By ruling himself out, Leung’s announcement helps Beijing solve the first major hurdle in picking the next chief executive.

Welcome to the second round of contest for the top post.

The annual NPC and Chinese People’s Political Consultative Conference (CPPCC) plenary sessions, often known as “two meetings”, has traditionally been seen as the barometer of China’s policies, including its Hong Kong approach. Hot on the heels of the Mong Kok clash, pundits predicted strong condemnations on the “rioters” by Beijing. That was not the case. At a meeting with Hong Kong and Macau CPPCC delegates, Zhang called for “greater accommodating” for the overall interest of the society as he insisted not to condone violence.

On March 5, he met with Leung. At a post-meeting briefing, Leung quoted Zhang as saying he was “shocked” and “deeply grieved” by the unrest. Zhang reportedly said he did not understand why such as “violent, anti-social” incident had happened. An informed source revealed Zhang also said there should be “deep reflection” over the incident, which was not reported by Leung at his media briefing.

In related development during the “two meetings,” deputy director of the State Council’s Hong Kong and Macau Affairs Office Feng Yi said Beijing’s views should be conveyed to Hong Kong people in a language they could “understand” and were “acceptable and familiar” to them. He said it would be “normal” if there were young radicals being elected to the legislative in the September election. As Beijing signaled moderation, “anti-Leung” voices have emerged from within the pro-establishment circle. CitzenNews understands that Zhang has spoken against the “we-they,” “friend-foe” dichotomy and the overweening approach in leadership. He said those who handled Hong Kong affairs should make a “change of paradigm.” Officials, he said, should promote harmony and togetherness and adopt an approach of “seeking consensus, accommodating differences.” His remarks are seen as veiled criticism against Leung.

With the Mong Kok unrest broke out in the aftermath of the Occupy, President Xi felt increasingly impatient with the failure of Leung to improve ties with the pan-democrats in early 2016. An informed source said Beijing was caught in a dilemma. First, they did not have an appropriate reason for saying no to Leung’s re-election bid. But secondly, they found it increasingly difficult to get 601 votes, the minimum votes needed for a chief executive to be elected, for Leung even if they want to.

Beijing has decided not to give a green signal to Leung’s re-election to help encourage potential candidates to come out. Voices in support of a “contested” election have also surfaced from the pro-establishment camp. More important, Zhang paid a visit to Hong Kong in May. Although his trip featured a major Belt and Road conference, the major purpose of his trip was to forge dialogue with moderate pan-democrats. It was made possible after Zhang ordered a meeting with the pan-democrats was a must. An original plan to arrange a meeting between them was aborted after Leung’s office failed to agree with the pan-democrats on the arrangements.

The annual June 4 vigil is arguably no longer a stumbling block in dialogue between Beijing and the democrats.

In his major speech delivered at a dinner banquet, Zhang has underscored the importance of not forgetting the “original intent” of the “one country, two systems” policy and “patience” and “confidence.” Saying Hong Kong was a pluralistic society, he said it was natural that there were different voices, adding it was important to have rational dialogue. The informed source said nearly 80 per cent of Zhang’s speech was based on remarks made by Xi. Zhang’s historic dialogue with the pan-democrats has paved the way for the re-issuing of home visit permits to the democrats in November.

That there was no major initiatives taken by Leung on his ties with the pan-democrats since Zhang’s trip has reinforced one line of thinking in Beijing that Leung was indeed seen as a major obstacle in the implementation of Beijing’s softened approach towards the democrats.

Since taking office in 2012, one of the major criticism against Leung’s leadership was his failure to unite the society, or put it in a sarcastic way, his success in dividing the populace. A veteran political figure said a former close ally of Leung has privately said she would never work with him again. Never. Former chief secretary Sir David Akers-Jones, who was one of the key supporters of Leung four years ago, has lamented Leung’s failure to make more people “like” him. Sir David lent support to Regina Ip Lau Suk-yee in her election rally last month. Remarks made by pro-Beijing heavyweights including Elsie Leung Oi-sie and Rita Fan Hsu Lai-tai in recent months stressing the importance of public support for the chief executive have been rightly seen as a not-so-subtle shot of Leung’s trouble.

Former Legislative Council Tsang Yok-sing was more explicit. In an interview with the US Time magazine published in late August, he warned polarisation of Hong Kong would not be eased if Leung was re-elected. “(But) if CY were going to rule Hong Kong for another term, he wouldn’t change the ways he has acted, especially his relations with the various political groups.” He said later he would consider running if no one came out to challenge Leung. Shortly afterward, Financial Secretary John Tsang Chun-wah changed his mind and said he was willing to contest if that could be a help to the city. He resigned three days after Leung gave up seeking his second term.

Despite the failure of a couple of candidates who championed a “ABC”, or Anyone But C Y, platform in the September Legislative Council election, the rise of localists and advocates for the notion of “self-determination” was apparently clear. The defeat of Tse Wai-chuen, a key Leung ally, in the architectural, surveying, planning and landscape functional constituency by Edward Yiu Chung-yim is illuminating. It is the strongest sign of the shrinking of Leung’s support base in professional sectors. Leung is a member of Yiu’s functional constituency. Beijing’s worries about the failure to grab 601 votes for Leung in next year’s election deepened. Worse, he might not even able to get 150 nominations for him to be eligible for running. From Beijing’s perspective, they would not take any risk whatsoever of their chosen candidate being vetoed by the Election Committee.

Events unfolded after the oath-taking antics of Sixtus Baggio Leung Chun-hang and Yau Wai-ching that triggered another Basic Law interpretation by Beijing had given credence to the theory that Leung Chun-ying’s re-election would be given a big boost as a result of that. The line of argument was that he could emerge as the best pick when it comes to the battle against Hong Kong independence. But a member of Leung’s team was unsure. He reportedly said at a closed door session with community figures the “independence” factor could be a plus, but also a minus to Leung. Leung’s supports began to smell the rat when Xi gave no message on his second term when they met at the margins of an APEC meeting in Peru in November. A political figure close to Beijing reportedly said privately Leung could do a big favour to Beijing if he announced publicly not to run.

It is obvious that the central government’s Liaison Office played a key role in propagating the message that the re-election chance of Leung was rising in November. The blitz of “pro-Leung” publicity came to an end on December 9 when Leung announced not to run. A knowlegeable figure described it as a “well-planned” move by Beijing to remove Leung with the final decision made by Xi. That it was triggered a few days before the December 11 Election Committee subsector election practically allowed no time for Leung to “make trouble.” 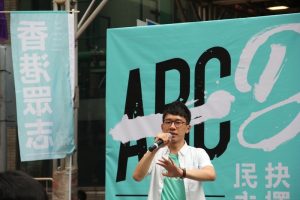 Rise of localists and advocates for ‘self-determination’ worries Beijing.

It is open secret Beijing had originally picked former chief secretary Henry Tang Ying-yen in the 2012 chief executive election. Senior mainland officials had twice told Leung not to run, but to no avail. Leung won the poll with 689 votes at the end of a scandal-plagued election. The source said some mainland officials were dismayed with the negative campaign and Leung’s campaign tactic. They have reservation about Leung, but have no choice but to back him at the late stage of campaign.

2017 marks the 20th anniversary of Hong Kong’s return to Chinese sovereignty. The Chinese Communist Party is due to celebrate its 100th birthday in 2021. Later this month, Donald Trump will be sworn in as the next President of the United States. The last thing Beijing wants is Hong Kong becoming one more issue on its agenda of international politics. On the domestic front, Xi has championed a harmonious society. A sharply-divided Hong Kong is an embarrassment.

That the decision to dump Leung boils down to the simple truth that Beijing is unhappy with his work. Leung did not seem to know the wind has changed. At a recent private occasion, he reportedly said he was confident of getting 700 votes to win his second term. That will not happen. History looks certain to remember Leung is the first chief executive since the handover who has served one term.

This is the first of a series of articles on the upcoming 2017 Chief Executive election. A Chinese version has and will be published on a new Chinese online platform, CitizenNews (www.hkcnews.com)