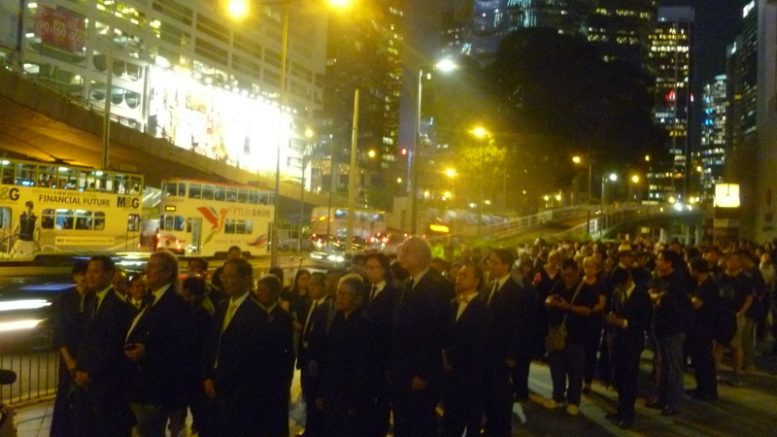 Speechless. Thousands of lawyers, law academics and students are joined by ordinary people to stage a Silent March against NPC Standing Committee's interpretation of the Basic Law on Tuesday.

Hot on the heels of a declaration of war against pro-independence activists by a retired senior Beijing official, a Hong Kong resident filed a judicial review over the validity of the oath-taking of eight pro-democracy lawmakers on Thursday.

It is yet another sign of the beginning of a long winter in Hong Kong under the “one country, two systems” political framework. Most vulnerable to the chilly winds are the pro-democracy camp, in particular the localists and pro-independence activists, the judiciary and the academia and education sectors.

Commenting on the NPC Basic Law interpretation in Shenzhen on Wednesday, Chen Zuo’er said the ruling would not “kill off pro-independence activists in a fatal thrust.” “This is a battle… But not all the problems will be resolve in one battle,” said Chen, who is president of a semi-official think-tank, China Association of Hong Kong and Macau Studies.

He said there were “many things” needed to be done after the NPC standing committee ruling. “All Chinese and Hong Kong people are looking forward to see (the tasks being done.) The central authorities have given a sharp weapon (NPC ruling) to the executive, legislative and judicial branches.”

Chen reiterated that Beijing has “zero-tolerance” towards pro-independence movement. He vowed to treat them as “rats in the streets,” being “chased and hit by everyone.”

His vow was soon proved to be no puffing. In an intriguing development, the validity of the oaths of another eight pro-democracy lawmakers faces challenge in court. They are Leung Kwok-hung, Nathan Law Kwun-chung, Cheng Chung-tai, Shiu Ka-chun, Raymond Chan Chi-chuen, Eddie Chu Hoi-dick, Lau Siu-lai and Edward Yiu Chung-yim.

Signs of a full-scale attack against the pro-democracy faction have surfaced after the NPC Staning Committee interpreted Article 104 in a ruling on Monday. Hours after it was passed, Chief Secretary Carrie Lam Cheng Yuet-ngor said the Government was studying the impact of the interpretation on other lawmakers.

At a policy panel meeting, Secretary for Development Paul Chan Mo-po gave an odd statement, saying his response to lawmakers should not be interpreted as a recognition of their status as Legco members.

About the same time, at least one pro-establishment lawmaker Ma Fung-kwok has written to the Legco President to question the validity of the oath-taking of some pro-democracy lawmakers in view of the NPC ruling.

They are among the signs that the central and Hong Kong government, the pro-establishment lawmakers and the “love China, love Hong Kong” forces have rolled up their sleeves launching a merciless attack against the pan-democrats inside and outside Legco.

While dragging a bunch of pan-democrat lawmakers into a legal battlefield, the two governments have given clear signals of reopening a battle, namely the legislative work on Article 23.

Chief Executive Leung Chun-ying said after the NPC ruling enacting a national security law was no longer just a constitutional duty. He argued there was “practical meaning” for it to be done, which could be translated as “urgent and practical need.” He rebuked the argument that pro-independence movement was mere talk, claiming some people did push for Hong Kong independence.

Article 23 should be enacted at soonest, Chen says

On Wednesday, Chen Zuo’er went further. He said Article 23 should be enacted into local law as soon as possible.

In a combative mood, Chen, formerly a deputy director of the State Council’s Hong Kong and Macau Affairs Office, also took up judges. He made veiled attack against judges for being too lenient in handling cases related to political dissent.

He accused the prosecution and judiciary of failing to meet “people’s expectations” in defending national security and making it “almost cost-free to oppose and commit crime against Beijing.”

Asked to explain further, he said: “There were a lot of cases in the past two to three years. From the storming of the PLA barracks to the Occupy Central protests an the Mong Kok riot, there were a series of such cases (of leniency of judges.)”

Also bearing the brunt of attack in the battle against pro-independence advocacy is the education sector. Pro-Beijing figures have blamed teachers and educators for failing to instill a stronger sense of nationhood and national identity, which has resulted in the growth of separatist thinking.

After staging a walkout to force their President to cancel a sitting and thus bar Sixtus Baggio Leung Chun-hang and Yau Wai-ching from retaking their oaths, the pro-establishment lawmakers have vowed to “use all means” to kick the pair out.

Amid heated nationalistic sentiments, Beijing is determined to show no tolerance and no mercy towards what they deem as dissenting voices in schools, the judiciary and society at large over issues that fall into the sensitive zones in the “one country, two systems” framework.