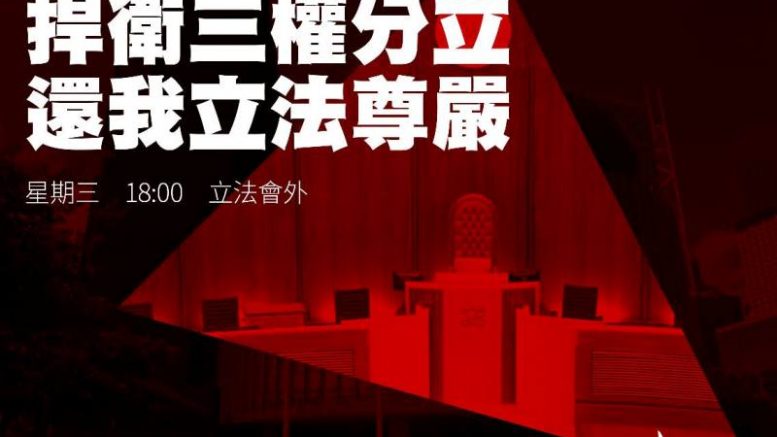 Youngspiration calls on supporters to join a rally at the Legislative Council on Wednesday to defend the separation of powers and uphold Legco's dignity.

Even though the result of the legal battle over the Legco seats of the Youngspiration pair Sixtus Baggio Leung Chung-hang and Yau Wai-ching remains unclear, Chief Executive Leung Chun-ying is seen as an early winner.

One line of thinking subscribed by some of his friends and foes is that he succeeded in capitalising over the reckless and tactless play, or misplay, of the pair’s swearing-in to galvanise public hatred towards the two rising localists’ alleged disdain for the People’s Republic of China.

With the central government’s Liaison Office apparently mobilising the “Love China, love Hong Kong” force behind the scene, the oath-taking saga erupted about two weeks ago has soon engulfed the society.

It added fuel to the burning issue of Hong Kong independence that Leung has persistently campaigned against since he raised it in his 2014 Policy Address delivered in January that year.

Newspapers in the past two weeks were flooded with political advertisements published by pro-Beijing associations and groups expressing anger of the “Chinese around the globe” towards the behaviour of Leung and Yau.

In a show of unity, the pro-establishment camp in the Legislative Council openly challenged the ruling of President Andrew Leung Kwan-yin, who was one of their key leaders before he took the President’s seat in Legco, over the second oath of Leung and Yau and three other legislators-elect.

Instead, they rallied behind Leung Chun-ying’s attempt to overturn the election results of Leung and Yau by trying to argue in court the pair should not be given a second chance of oath-taking because they had already lost their seats even before they officially took them.

Leung pronounced China as “Chee-na”, which sounded like the derogatory “Shina” used by Japan during the war time. Yau pronounced the People’s Republic of China as “People’s refxxking of China.”

Leung warns of ‘thousands of waves’

Yesterday, Leung Chun-ying further inflated what he described as the “far-reaching repercussions” of the oath-taking saga on mainland-Hong Kong relations if it was not handled urgently. He claimed it would affect “how China sees Hong Kong,” warning that “a tossed stone could whip up thousands of waves.”

In his remarks, Leung went further to warn of an international political storm if someone in a foreign legislature made references about China as “Shina” in their meetings.

Also yesterday, Secretary for Justice Rimsky Yuen Kwok-keung filed on behalf of the Chief Executive to revise the writ of their judicial review of Legco President’s ruling on the second oath-taking of Leung and Yau.

The High Court was asked to declare the two seats taken up by Leung and Yau in the New Territories East and Kowloon West geographical constituencies have been vacant.

The Chief Executive upped the ante as the entire pro-Beijing, pro-establishment force

was fully mobilised to drum up public opinion against the electoral success of Leung.

The combined, if not coordinated crusade of the Chief Executive and the loyalists inside Legco and in High Court and the expected mass rally against the two young localists outside Legco building will give more political mileage points for Leung in the upcoming chief executive race.

He could claim credit for having done his job of having thwarted the move by pro-independence activists to hurt the feelings of Chinese and do harm to relations between the people in the mainland and Hong Kong.

The argument was that Leung will stand a higher chance of getting his second term if Hong Kong plunges into chaos and turbulence. The more chaotic and turbulent the city has become the bigger the advantage of Leung in the race for the top post. This is because he will be seen as the best candidate who is prepared to fight tough battle with the pan-democrats and his political foes.

A long-time mainland scholar has predicted a big jump of Leung’s popularity in the wake of the oath-taking saga. He argued Leung might have started to turn around the corner with his popularity started moving upwards following years of decline.

That sounds unbelievable. Given his deeply-rooted unpopularity, Leung has a mountain to climb to regain people’s faith. Importantly, it looks unlikely Leung will become a national hero for mounting a campaign to boot out the two localists.

It is highly questionable that those who say no to the behaviour of Leung and Yau will find the Chief Executive a leader they can trust and like in the wake of the oath-taking saga.

The row over the Legco seats of Leung and Yau will drag on for some time. The jury is out on whether Leung Chun-ying could score goals from his alleged play of the Hong Kong independence card and “insulting the Chinese” card. The Chief Executive will still face ridicule and criticism over the fact that pro-independence thinking has grown in the city, particularly among the young, in recent years after he took power.

That is the key question Beijing cannot ignore if they want to find solutions to tackle the rise of separatism in the city. Put plainly, they must ask whether Leung’s high-profile, hard-hit political tactic helps solve the problem, or do the opposite.

Be the first to comment on "Is C Y Leung early winner of oath-taking game?"