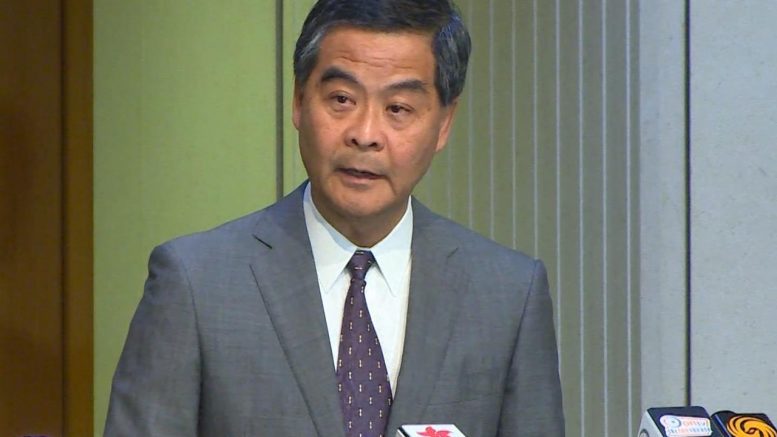 Like his mentor Tung Chee-hwa, Chief Executive Leung Chun-ying and his team are gripped by siege mentality.

History does repeat itself. In marked resemblance to the siege mentality permeated in the then Tung Chee-hwa administration in their final years, the right-hand woman of the Government led by Leung Chun-ying has blasted certain people attacking their will to govern persistently.

Lamenting the society has become too politicised and awash with conspiracy theories, Chief Secretary Carrie Lam Cheng Yuet-ngor claimed certain people have ceaselessly tried to sow discord within the team of principal officials and poison their ties with civil servants. “That will only create more disputes in the society, more constraints for the Government to do concrete matters.”

Mrs Lam vented out her anger and frustrations over the predicaments of the Leung administration in the past four years on Monday as she made a belated attempt to clarify her remarks on a Basic Law provision on fiscal prudence on Friday.

On Friday, she cited Basic Law Article 107, which elaborates the principle of prudent public finance management, as an example showing not everyone agreed with every provision in the city’s constitution.

It was being interpreted by media as her disagreement with the provision. Some pundits went further to claim she was making veiled criticism against Financial Secretary John Tsang Chun-ying, who has stuck to fiscal prudence. Her remarks have also been cited as yet another piece of evidence that she was eyeing on the post of chief executive.

Speaking before leaving for a trip to Vietnam on Monday, Mrs Lam has sought to clear the air and trash what she claimed as “conspiracy theories” and persistent bad-mouthing of the ruling team in one go.

“Some people have thought I am very ambitious to run for the post of chief executive … since I made a duty visit to Sichuan in May,” she said. “But I want to tell these people that they are wasting their efforts as my stance over this issue has been crystal clear.”

Time will tell whether Mrs Lam will follow the political path of her predecessors including Donald Tsang Yam-kuen and Henry Tang Ying-yen. Tsang replaced Tung as Chief Executive in 2005 and was then elected for a full five-year term two years later. Tang quit to run for the post of chief executive in 2012, which was taken by Leung.

A throwback to the Tung days

There was a sense of deja vu, however, on Monday when she took the opportunity of clarification on her Basic Law remarks to talk of the bigger picture of governance difficulties. It was a scene reminiscent of the host of troubles faced by Mr Tung before he stood down in 2005

In her outburst, Mrs Lam identified governance problems including misread, exaggeration and distortion of government messages and spread of erroneous information, excessive politicisation and conspiratorial thinking in the society.

Without elaborating further, she also claimed some people have never stopped trying to dampen the political will of the government to govern and cause divisiveness among senior officials and between them and the civil service.

The list of governance difficulties bore resemblance to the conundrum confronted by Mr Tung during his seven-year stint.

Tung’s discord with the then chief secretary Anson Chan Fang On-sang was an open secret within his administration and society at large. Rumours of a split between Mr Tung and the senior echelon of the government over the principal official accountability system flew when it was rolled out in 2002.

Like the then Tung administration, the current Leung team put the blame on certain hostile media and the pan-democratic opposition for their unpopularity.

In the eyes of the current administration, they are enemies with the same agenda, which is to make them difficult to govern.

18 months after the July 1, 2003 historic rally, Tung delivered a mea culpa policy speech in 2015, in which he admitted shortcomings and inadequacies in his governance and promised of making improvements. It had come too late. He stood down two months later.

Like the then Tung administration, the Leung team is faced with more foes than friends since he took power. But unlike Tung in his last months in office, Leung and his team-mates seem to have no mood finding fault and weaknesses in their governance. Instead, officials have kept grumbling over being victimised by their perceived enemies, creating more difficulties for themselves in achieving better governance.

Be the first to comment on "Siege mentality seizes Leung team"