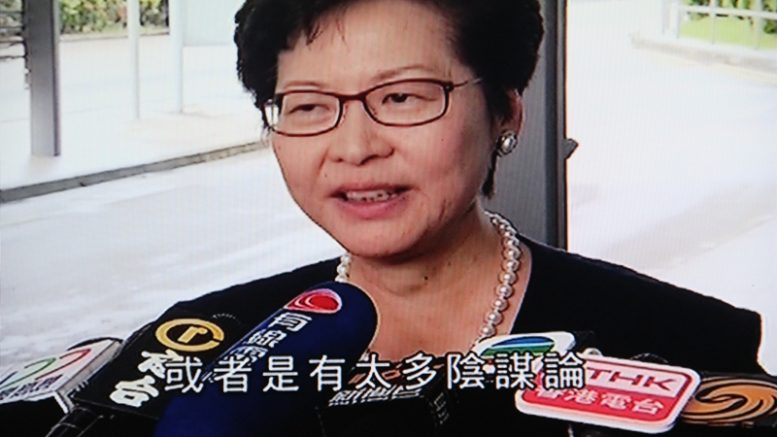 Chief Secretary Carrie Lam moves to clarify her remarks on Article 107 in the Basic Law, which requires SAR government to observe fiscal prudence. She said she has no disagreement with the provision and blamed critics for causing divisiveness at the top echelon of the Government.

Candidates vying for the 2016 Legislative Council election are required to sign a confirmation form saying they uphold the Basic Law and three provisions But while upholding the mini-constitution, they are indeed not obliged to “agree with every article” in the Basic Law.

Imagine a candidate who supports Hong Kong independence and has signed the confirmation form. Under the principle that he or she does not have to “agree with every article” in the Basic Law, let’s assume he or she only disagrees with Article 1, which says Hong Kong is an inalienable part of China. In that case, can he or she run? There is already an answer: No.

Those who disagreed with Article 1 and had planned to contest the upcoming Legco election have been disqualified.

Then there is another candidate who said he or she upholds the Basic Law, except Article 107. The provision says Hong Kong should “follow the principle of keeping the expenditure within the limits of revenues in drawing up its budget, and strive to achieve a fiscal balance, avoid deficits and keep the budget commensurate with the growth rate of its gross domestic product”.

Is he or she qualified to run for the election? If the answer is yes, does that mean one does not have to uphold all provisions when they said they uphold the Basic Law? If I were a candidate, I would like to ask which are the articles I must agree and which I can disagree for me to qualify for contesting Legco election.

Chief Secretary Carrie Lam causes a stir when she commented on Article 107 in the Basic Law.

Such question could be raised following remarks on the row over Legco election’s confirmation note made by Chief Secretary Carrie Lam Cheng Yuet-ngor at a youth summit last week. Mrs Lam lambasted a small batch of people, who flew the banner of Hong Kong independence blatantly, trying to use their candidature for the Legco election to advocate independence. That the Government’s Number Two official made a high-profile attack against pro-independence advocates and defended the returning officers at a critical time of the ongoing election was prompt and a show of the spirit of taking responsibility.

But when she remarked candidates do not have to “agree with every article,” she has caused confusion and unnecessary bickering.

True, the implementation of laws does not require the consent of people to every article in the ordinances. By the same token, articles in laws are not sacred and thus inviolable; they are subject to amendment in accordance with legal procedures because of changes in circumstances. Provisions in law can be amended.

The present requirement for candidates to uphold the Basic Law should mean a declaration of support for the spirit and text of the Basic Law in its entirety. It should not mean there are some articles that could be an “exception”. If that is the case, does that mean returning officers should specify which articles are the “exception” that candidates can disagree?

Each provision in the Basic Law had been formulated after taking into account the interests of various segments of the society for its implementation after 1997. Each article serves specific purpose and function. The argument that one does not have to “agree with every article” will create more confusion under the present political climate.

Be the first to comment on "Agree or partly agree with Basic Law? That’s the question"