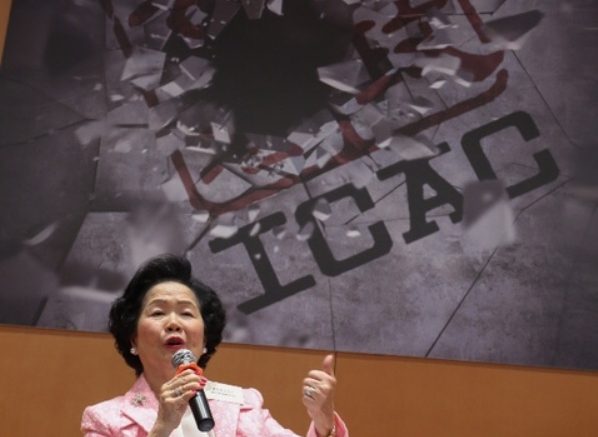 Former chief secretary Anson Chan calls on Hong Kong people to speak up and take whatever steps to put the ICAC's house in order.

During my time as Chief Secretary, I worked with four ICAC Commissioners… I met regularly with the Commissioner, to be briefed generally on its work, the progress of high profile cases and keep abreast of developments in the Commission and its resource requirements. At all times the fundamental importance of the independence of the Commission’s function from that of the rest of the Administration remained paramount in my mind.

This fact imposed and still imposes responsibilities both on the part of the Commissioner and the head of government to whom he reports. On the one hand it calls for appointees to the post of Commissioner to be of the highest professional and moral calibre, to be untainted by the potential for any conflict of interest and to have the courage and integrity to stand up firmly for the ethical values of the Commission. On the other hand, it calls for the Chief Executive, to whom the Commissioner reports and is accountable, to lead by example and to scrupulously refrain from any interference in the day-to-day work of the Commission in receiving and investigating corruption complaints.

With one notable recent exception ICAC Commissioners have, for the most part, met the high standards of conduct required and fulfilled public expectations. They have been able to point to a strong record of pursuing corruption complaints without fear or favour, including cases involving a former Chief Executive and Chief Secretary for Administration. The ability to pursue such cases, albeit within the strict operational guidelines that apply to the Commission, is clearly fundamental to the morale of ICAC staff in general and the Commission’s investigation officers in particular. When over 70% of staff refused to attend their annual staff dinner on 15 July, to demonstrate their strong disapproval of recent staff changes, it became clear that – to paraphrase the famous quote from Shakespeare’s Hamlet – “there is something rotten in the state of the ICAC”.

Where does blame lie for this sorry situation. I do not propose to speculate on the specific circumstances that led to the departure of the former acting Deputy Commissioner and the subsequent turmoil involving her replacement and the sudden departure of two other senior staff. The Commissioner, Mr Simon Peh Yun-lu, has claimed sole responsibility for the decision to ask her to step down to her previous rank, saying she was not up to the job.

In my experience it is unprecedented for a head of department to comment publicly in this way on the performance of a senior officer and then retreat behind a cloak of confidentiality when pressed to disclose in what respects Ms Li was found wanting, and why it took over a year for him to decide that she was not competent to remain as head of the Operations Division.

Mr Peh also fumbled answers on the point of whether she was acting in the post of head of the Operations Division for administrative convenience, or with a view to promotion. If the former there would be no need to inform the Chief Executive she was stepping down, as Mr Peh has said he did. If the latter, given that Ms Li had been acting for over a year and the sensitivity of her responsibilities within the organisation, did the Commissioner seek advice from the Advisory Committee on Corruption and did he alert the Chief Executive in advance that her unexpected demotion might be open to query and have serious consequences for senior staff morale? If so, what was the outcome?

The terms of reference of the Advisory Committee on Corruption are fairly broadly cast and include “to keep the operational, staffing and administrative policies of the Commission under review.” Its current chairman, Chow Chung-kong was seen standing beside the Commissioner at the press conference on 11 July.

The Committee has a specific responsibility, which is “to advise on action being considered by the Commissioner under Section 8(2) of the ICAC Ordinance.” This is important because this section of the Ordinance requires the Commissioner, in the event that he wants to terminate the appointment of an officer, to consult   the Advisory Committee and to warn the officer in writing that the termination of his or her appointment is under consideration and the reasons for it.

By requiring Ms Li to step down, rather than terminating her appointment, the Commissioner effectively dodged accountability for his action, robbed Ms Li of any right of appeal and tarnished the whole affair by his complete lack of transparency.

Meanwhile, despite the depth of concern, both within the ranks of the ICAC and the community at large, the Chief Executive has to all intents and purposes hidden behind the Commissioner’s actions and refrained from any public comment.

A wide ranging review of the functioning of the Commission was conducted in 1994 and addressed, among other things, the exercise of its powers and systems of accountability. In view of the gravity of the current threats to the independence and reputation of the ICAC I believe it is necessary to conduct a similar exercise under the auspices of an Independent Review Committee whose chairman and members are known in the community as persons of impeccable integrity.

The Committee should be tasked specifically with examining whether essential checks and balances are still in place to safeguard the autonomy of the work of the Commission and whether, given that the Chief Executive is now a political figure, his powers of supervision of the ICAC should be circumscribed, or subject to independent monitoring.

Legco should set up inquiry on Li

I hope the incoming Legislative Council will give high priority to pursuing its own inquiries into the circumstances surrounding the sudden resignation of Ms Li and the departure and threatened departure, in quick succession, of three other senior staff. Council members should also press the Chief Executive on his failure to honour the pledges he made at the time of his election in 2012 to implement, as soon as possible after he took office, recommendations in the report by the Independent Review Committee for the Prevention and Handling of Conflicts of Interest, chaired by former Chief Justice Mr Andrew Li Kwok-nang. The thrust of the Committee’s recommendations was to place the Chief Executive on a par with civil servants and Political Appointees in terms of requirements relating to the declaration of interests, acceptance of advantages and post-office employment.

Crucially, the Committee recommended establishment of an Independent Committee to consider and decide on permission (both general and special) for the CE to solicit and accept advantages. This would replace the highly questionable situation whereby the CE can currently decide on these things for himself and is effectively accountable to no one. Despite his promises, over four years into CY Leung’s term of office, none of the Committee’s main recommendations has been implemented.

Today, the ICAC’s slogan is ‘Hong Kong, our advantage is always you and the ICAC’. It is more than that. Alongside the rule of law and the reputation it has earned among overseas anti-corruption bodies, the ICAC is the jewel in the crown of Hong Kong’s status as a trusted international business centre. Local and overseas companies alike can invest and prosper in the knowledge that they are operating on a level playing field, when it comes to the award of contracts, and that public officials and private businessmen alike are subject to the strictest scrutiny in their dealings.

In recent years Hong Kong’s ranking as one of the world’s most corruption free jurisdictions has been slipping. We cannot afford to let this continue. We must keep our advantage, at all costs, and we must not hesitate to speak up and to take whatever steps are necessary in the next few months to put the ICAC’s house in order, re-establish its reputation for transparency, accountability and integrity and restore staff morale.

“Eternal vigilance is the price of liberty”

Wendell Phillips, the 19th Century American abolitionist, orator and social reformer famously said: “Eternal vigilance is the price of liberty”. His words following this quote are no less prescient and serve to remind us of the clear and present threats we face to our way of life and basic freedoms and what must be done to preserve the Hong Kong we all love. So let me conclude with his words:

“Power is ever stealing from the many to the few. The hand entrusted with power becomes the necessary enemy of the people. Only by continual oversight can the democrat in office be prevented from hardening into a despot: only by unintermitted Agitation can a people be kept sufficiently awake to principle, not to let liberty be smothered in material prosperity.”

Anson Chan Fang On-sang is former chief secretary of the Government. This is an edited version of her speech given at the Hong Kong 2020 and the Citizens Foundation Forum entitled “Assault on the ICAC and the rule of law” held on August 13, 2016.

Photo: Pictures provided by the organisers

Be the first to comment on "ICAC: We Must Keep Our Advantage"