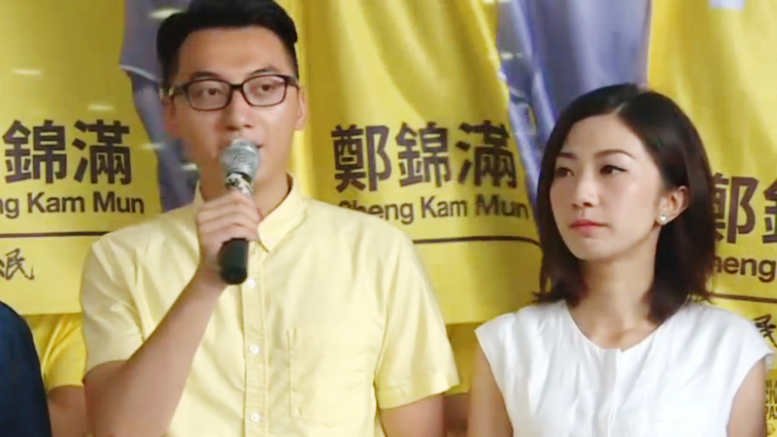 Cheng Kam-mun (left) of the Civic Passion, who signs a confirmation note in his nomination for Legco poll, was asked by election office to explain his pro-independence stance by Wednesday.

In a broad brush, findings of an university poll about the views of Hong Kong people about their post-2047 future including the option of independence are hardly surprising – and no cause for fresh jitters.

But a closer look at the findings that show 58.8 per cent of the 15-24s support independence will no doubt deepen Beijing’s fears about the trend growth of the inclination towards separation from the mainland among the younger generation. It looks set to give credence to the advocacy of hardliners for tougher tactics against the pro-independence movement.

The survey, conducted by the Chinese University of Hong Kong’s (CUHK) journalism school and released on Sunday, found 17.4 per cent say Hong Kong should become independent. 57.4 per cent said no. 69.6 per cent want the “one country, two systems” model to be extended beyond 2047 when Beijing’s 50-year-long pledge for Hong Kong after 1997 is supposed to expire. Six per cent said no.

81.2 per cent say “Hong Kong independence” will not possibly happen in the foreseeable future. 13 per cent say “half-half” while 3.6 per cent believe it is possible.

Though mixed, poll results set to be seen negatively

On the face of it, the findings are a case of a “half-full, half-empty glass”. Seen from a positive light, an overwhelming 81.2 per cent do not think independence is a real option. With expectation for independence stayed lowly, the possibility of pro-independence thinking turning into concrete action, let alone a political movement, is remote, at least in the short- and medium-term.

But obsessed with fears and a feeling of insecurity, it seems certain the negative line of interpretation of the poll results, or the “half-empty glass” theory, will prevail.

Superficially, their fears are not groundless. Take the results of the Legco New Territories East by-election as an example. Edward Leung Tin-kei, a University of Hong Kong student who advocates independence, shocked officials, political parties and analysts by grabbing 15.4 per cent of total valid votes cast in the by-election in March.

Under the proportional representation list voting system, a pro-independence candidate who wins 17.4 per cent of votes (those who say yes to independence in the CUHK poll) is almost certain to be able to get one seat in the upcoming Legislative Council election.

Although the votes of the 17.4 per cent of pro-independence voters will be split between pro-independence candidates and radical pan-democrats including the localists, Beijing has taken no chance.

There are increasing signs that a handful of pro-independence Legco hopefuls including Edward Leung are the targets the mainland and Hong Kong government are keen to bar them from qualifying for the polls.

Results of the CUHK poll, however, show there is considerable support for independence among the populace, in particular the 15-24s, who will be 46-55s by 2047. Many of them will have their own families and children in their present ages now.

Undeniably, they may change their minds about independence as they grow older.

Election rule a must for stability, Wang says

History shows pro-independence thinking grows as relations between Hong Kong and the mainland gets worse.

Speaking last week, head of Liaison Office’s legal affairs department Wang Zhenmin said the new election rule was a must for the sake of long-term peace and stability of Hong Kong.

Apart from the uncertainty arisen over legal challenge against the rule and any decision to disqualify those hopefuls, any move to deny their rights to stand for the polls on ground of seeking long-term stability may do the opposite.

It may only stop them from speaking at Legco, but not mute their voices in society. Worse, it sets another bad example of curbs on freedom of expression, risks sparking more fears about the future of “one country, two systems” and giving a boost to the advocacy for independence.

That can hardly be a smart tactic aimed to strive for long-term peace and stability in the city.