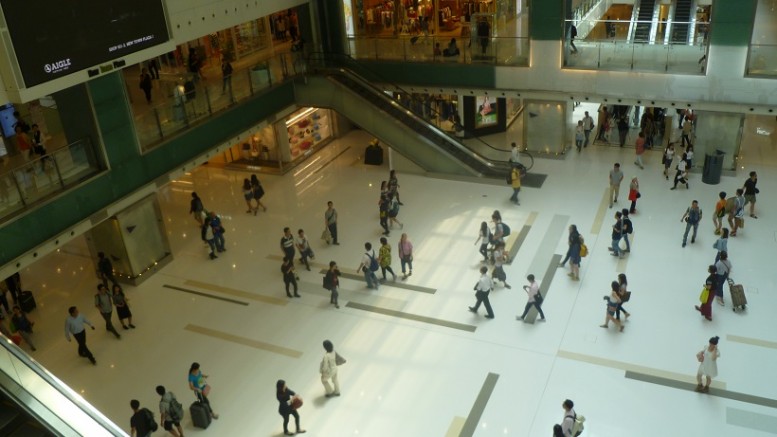 Scene of the New Town Plaza, a popular attraction for mainland visitors, in Sha Tin in the afternoon of May 3. Despite a surprise surge of mainland visitors in the first three days of the golden week holiday, there are fears mainlanders are now less interested in coming to the city.

The number of mainland tour groups who came to Hong Kong during the Labour Day golden week holiday has dropped by more than half. Hoping to salvage business, Travel Agent Owners’ Association president Yip Hing-ning had met with Chief Executive Leung Chun-ying at the weekend. He revealed Leung has asked him to spread a message saying he would immediate urge the central government to resume the multiple-entry scheme for Shenzhen residents and increase the number of cities under the individual visitors’ programme under a condition. Leung reportedly said he would agree to do so only if Hong Kong could reach a consensus “not to kick tourists’ luggage and other insulting actions”.

Is there such a “secret deal”? How can Hong Kong people make a guarantee “not to kick luggage”? Who makes the guarantee? The Government has not responded to Yip’s claim. Knowledgeable figures in the tourism sector have come up with various ideas to revive the industry. But the voice calling for a resumption of multiple-entry scheme has been weak. This is because people who understand tourism know well the original intention of the scheme is not aimed to promote tourism, but to facilitate urban integration between Hong Kong and Shenzhen.

The individual visitors’ programme for mainlanders was launched in June 2003. Following the signing of a Closer Economic Partnership Agreement between Hong Kong and the mainland, the programme was introduced in four cities in Guangdong. It was extended to 49 cities since then. The programme has been seen as a direct policy adopted by Beijing to rejuvenate Hong Kong’s economy in the wake of the outbreak of Sars, known as severe acute respiratory syndrome. The city’s travel and retail sectors have directly benefited after the programme was introduced.

In April 2009, Shenzhen’s public security bureau announced Shenzhen residents could apply for a one-year multiple-entry permit under the individual visitors’ programme for them to come to Hong Kong for pleasure or work. More than 2.2 million residents are estimated to be able to pay unlimited visits to the city with the permit. In its announcement, the Shenzhen authorities said the programme marked a substantive step towards urban integration between Hong Kong and Shenzhen.

If the individual visitors’ programme is mainly aimed to “benefit Hong Kong” economically, the objective of the multiple-entry scheme goes beyond economic benefit, but deeper Hong Kong-Shenzhen integration. The Shenzhen municipal government said in a press release on the scheme the two cities must step up cooperation to realise urban integration in areas including visits of residents across the border, basic infrastructure construction, city planning and construction. The two cities could only be able boost their competitiveness and stand on a no-lose situation in the world if both sides can build a Shenzhen-Hong Kong city, it said.

When the multiple-entry scheme was introduced, the then Director of the Chief Executive’s Office Norman Chan Tak-lam has overseen a study on the building of a Shenzhen-Hong Kong metropolitan city. The study has outlined five areas of integration, including the flow of people, telecommunication, extension of Octopus card to Shenzhen, purchase of financial products by people from both sides and basic education.

In view of the present political climate, the individual visitors’ programme has not yet returned to normal. The resumption of multiple-entry scheme is far more complicated and difficult. The idea of resumption of the scheme has not been seriously thought through.

(Editor’s note: Leung Chun-ying said on Tuesday the Government has “no preparation, plan and wish” to resume the multiple-entry scheme. He did not categorically deny reports that he had made a conditional promise to ask Beijing to resume the scheme.)