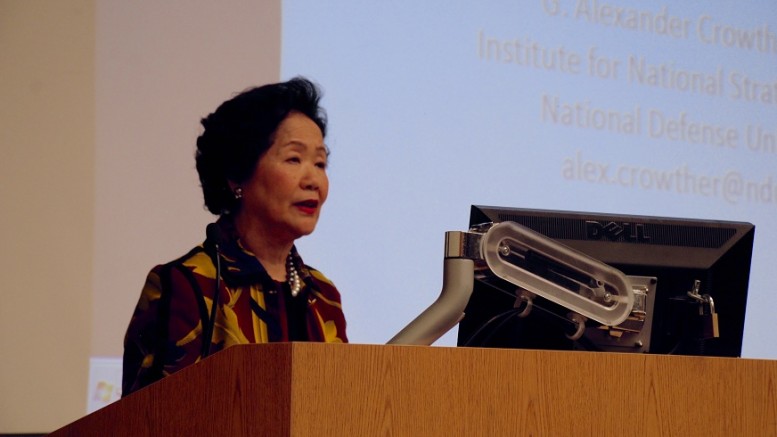 Former chief secretary and convenor of Hong Kong 2020 Anson Chan speaks at Tufts University. In her keynote speech, she says most Hong Kong people do not support independence.

Over the past 30 years, Hong Kong has been blessed with being one of the world’s  most peaceful, cosmopolitan and economically successful cities . Those who predicted doom at the time of the return of sovereignty to China in 1997 were proven decidedly wrong. Hong Kong transited smoothly from British to Chinese rule.

Lately, however, cracks have been appearing in our social edifice. Past tried and trusted economic formulae can no longer be relied upon to lead to increasing prosperity. The conventional capitalist theory of the trickle-down effect of economic growth is not working: the rich keep getting richer while levels of poverty remain stubbornly high.

Young Hongkongers in particular fear a bleak future in which their job prospects look increasingly limited and housing is largely unaffordable for young first time buyers, unless they have the benefit of generous parents to help them with the down-payment.  At the same time, they are becoming increasingly disenchanted by a steady decline in the quality of governance and distrustful of the Central Government’s long term intentions towards Hong Kong. Every day, we see evidence of increasing interference in Hong Kong’s domestic affairs by mainland cadres stationed in the Central Government’s local Liaison Office.

Precious rights and freedoms guaranteed under “one country, two systems” such as  freedom of the press, of publication and of academic thought – are being chipped away, while our local government seems to turn a blind eye – more bent on pleasing the central authorities in Beijing than standing up for Hong Kong and its core values.

These fears and frustrations came to a head in the shape of the 2014 Occupy Central  Movement.

Some of us felt conflicted in our feelings about the protests. On the one hand we sympathised with the concerns of the young protesters and admired their willingness to place themselves at some personal risk to defend their beliefs. At the same time we could not ignore the fact that they were breaking the law.

The occupation of the streets lasted for nearly 80 days and undoubtedly marks a  watershed in Hong Kong’s recent history. While the root causes of this unprecedented  civil disobedience can be traced to the general economic and political malaise, the actual trigger for the protests were decisions promulgated by the Standing Committee of the National People’s Congress in August 2014. These decisions effectively quashed the hopes of Hong Kong people that we could elect our next chief executive by genuine universal suffrage in 2017. In the end, the Beijing package was firmly voted down in the Hong Kong legislature. Although we will be unable to move forward in 2017, we will have refused to mortgage the integrity of our future system  of governance by accepting phoney democracy.

Fight for democracy will continue

The late Martin Luther King Jr said: “We must accept finite disappointment but never lose infinite hope.” I couldn’t agree more: our struggle for full universal suffrage will continue. We value greatly the strong stand that has been taken by the current US administration in support of this goal and look forward to that support continuing in the coming years.

Fifteen months on there are some in Hong Kong who choose to characterise the Occupy protests as a failure. I disagree. It is true that the protesters did not achieve their primary objective of winning genuine universal suffrage. However, the protest movement brought to the fore a new generation of highly educated young people, passionate about the future of the city they love and with the courage to stand up and be counted. 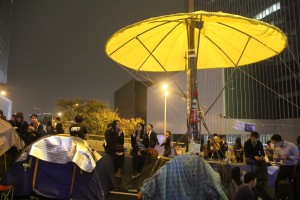 New political movements are springing up to give voice to this passion, some of which will morph into political parties and field candidates in forthcoming elections  to our Legislature in September. Despite Government urgings that voters should punish those allied  to the protest movement at the polls, the results of recent district elections have shown that the majority of the Hong Kong electorate has no intention of doing so.

On the contrary, at a recent by-election called to select a replacement for a legislator  who had resigned, a young ‘localist’ candidate – with no previous political track record – garnered a significant number of votes and, in the process, succeeded in rattling the cage of the established parties contesting the seat.

In its extreme form, some sectors of the ‘localist’ movement are advocating independence for Hong Kong; but this is not supported by the vast majority of people who accept that independence is neither a desirable nor realistic aspiration.

Hong Kong people do not want independence from China; they simply want to preserve the values, freedoms and lifestyle that make the city so special. If Hong  Kong becomes just like any other Chinese city, it will lose the ability to continue its current unique and enormously valuable contribution to China and to the world.

As China has risen in economic power and influence on the global stage there has been a tendency to downplay Hong Kong’s continuing importance as a bridge between east and west and a powerful force for economic freedom. The reality is  that Hong Kong is still the foremost international city in China and many countries have huge stakes in the city’s future, both in its own right and as a gateway to business and investment in the mainland.

Hong Kong’s ability to take its place as one of the world’s leading economies and a  trusted treaty partner rests firmly on the fact that, despite many current shortcomings in our system of governance, the rule of law still prevails alongside a robust and independent Judiciary. It is this fact that enables the US and many other overseas jurisdictions to enter into cooperation with Hong Kong authorities on a wide range of matters. Sustaining the rule of law and our other core values will require constant vigilance and the courage of our convictions.

This has been exemplified by a particularly shocking recent event that captured worldwide attention and sent a chill through the entire Hong Kong community.

A Hong Kong bookseller, Lee Po, who also happened to have a full British passport, was apparently spirited across the boundary into mainland China last December by mainland security agents. This is one of the most extreme examples, since 1997, of our sovereign power feeling it can act with impunity and complete disregard for “one country, two systems” when its national interests are deemed to be under threat.

It cannot be stressed too strongly that Lee and his colleagues have not broken any  Hong Kong law. The action they have faced seems to be symptomatic of Beijing’s trend towards increasingly authoritarian rule, including zero tolerance of any form of dissent at home and an uncompromising stance on many issues of foreign policy. 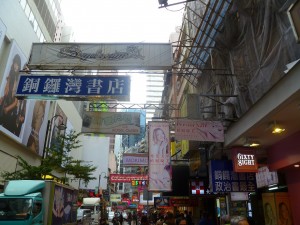 As a proud Chinese, it is my sincere hope that my country can strengthen its role as  a nation that is helping the world to move forward on all fronts. While 15 Chinese overseas investment is helping to raise the living standards of millions, the picture at  home is not so encouraging. The dynamics of the current leadership in Beijing are opaque, but it is clear that the instincts of the Communist Party are, as ever, to suppress freedom of thought and clamp down firmly on those who appear to challenge its doctrine in any way. The leadership also seems to continue to believe mistakenly that as long as you can sustain economic growth, the populace will be happy to forego basic political rights and freedoms.

My most cherished hope is that, over time, China can evolve peacefully into a nation where basic human rights are guaranteed and where every individual has an equal right and opportunity to influence how and by whom he or she is governed. Providing we hold fast to our core values, Hong Kong can play a key role in helping to chart a course towards more democratic government on the mainland, something that I am sure all of us here today earnestly wish for.

Anson Chan Fang On-sang, former chief secretary of Hong Kong Government, is convenor of HK 2020. This is an edited version of her keynote speech at the US-China Symposium held at Tufts University.

Full article can be found at www.hongkong2020.com