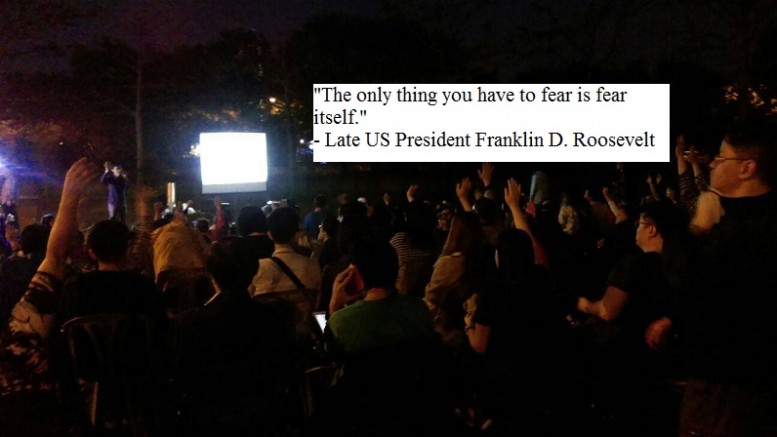 Ten Years kicks off a series of territory-wide public showings.

The power of movie is in full display as a dystopian Hong Kong production Ten Years makes more waves after it won the award of Best Film at the annual Hong Kong Film Awards on Sunday.

Foretelling Hong Kong’s political and social life with a touch of pessimism and helplessness by 2025, the movie reflects the depth of Hong Kong people’s fears about the growing communist influence in their way of life.

Coming in times of worsened schism of the society aggravated by the mainland factor, the accolade for the film has drawn polarised feedback from the populace.

Some commentators has accused the awards’ association of playing fire by granting the top award to the movie on political ground. They warn it would spur the growth of pro-independence movement.

Supporters say the award showcases the victory of the power of fearlessness of fear. Announcing the award result, association’s head of board of directors Derek Yee Tung-sing cited the late United States President Franklin D. Roosevelt’s saying: “The only thing you have to fear is fear itself.”

In yet another sign of its political incorrectness in the eyes of the communist authorities, the result of the Best Film award was being censored by the mainland media. The official Global Times has slammed the movie as absurd and pessimistic.

In Hong Kong, the boss of a local major film company Peter Lam Kin-ngok said he disagreed with the award, saying it was “unfortunate” and “unfair” to film makers. Lam, Media Asia chairman, has argued the film did not possess the qualities of a top film. It was not nominated for any other awards, nor was it a blockbuster, he said.

“It was unfair to filmmakers. Politics has kidnapped the profession and politicised film awards,” he said.

Civic Party leader Audrey Eu Yuet-mee Ten Years deserved the top award. “The best movies are those that touch our lives… It (Ten Years) captures the fear, depression, irony, helplessness… all the uncertainties and unhappiness of Hong Kong.”

Coming in the midst of fears about the increasingly “mainlandisation”, both perceived and real, of the city’s film industry, the controversial production has hit the nerves of the jittery community.

It did not take long for it to become a spark that set ablaze a fireball of fears among the populace about the city’s future. Cases like the missing bookseller Lee Po saga and attacks by the communists’ propaganda machine plus the latest news blackout of the award for Ten Years have and will add fuel to the fire.

To be fair, Peter Lam has a point when he took issues with Ten Years‘ qualities and box office. Venturing to comment on the politically-sensitive movie, Financial Secretary John Tsang Chun-wah said there is room for improvement of the movie such as technical skill.

But if a good movie is defined as a piece of creative work that strikes the hearts and minds of people, Ten Years has scored high marks, and a phenomenal success from a different perspective.

For film makers and the community at large, the worst fear is fear itself. Fears of political pressure, persecution and being “made missing” have and will scuttle freedoms of creation, imagination and expression.

By scooping the Best Film award with the story of gloom and doom, Ten Years has ironically given a much-needed, well-timed boost to the  mood of Hong Kong people with a powerful show of the power of fearlessness of fear.