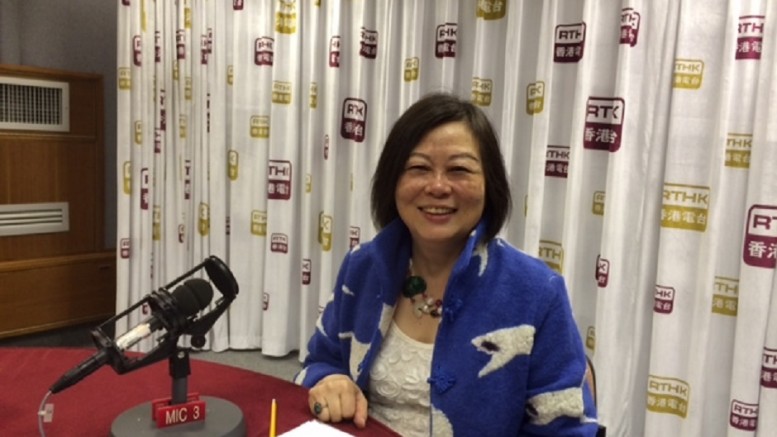 Anna Wu, chairperson of the Competition Commission speaks at the RTHK's Letter to Hong Kong.

I understand this is a particularly exciting time for you as you make final preparations for the launch of your business. Following the footsteps of many young entrepreneurs, there will be a lot of sweat and pain and sometimes taking a less arduous course may become tempting.

It may come as some consolation to you that you are in good company as the Competition Commission is also getting ready for its “D-Day” i.e. when the Competition Ordinance comes into full effect on December 14  2015. Hong Kong is finally joining over 100 jurisdictions around the world when its cross sector competition law comes to life.

Both of us will be new kids on the block. The Competition Ordinance will be especially relevant to you. It was enacted as law in June 2012 with the aim of promoting a level playing field in the marketplace by prohibiting conduct that harms competition in Hong Kong. Consumers (including businesses acting as customers) benefit from competitive rivalry. A healthy competitive environment incentivizes businesses to offer a wider variety of better quality products at lower prices. It also encourages innovation, which is key to progress.

You are of course familiar with the term “laissez-faire” which is synonymous with the concept of free market. Its advocates generally believe that the “invisible hand” of the market will ensure optimal distribution of all resources. However, experience around the world, including here in Hong Kong where we believe religiously in safeguarding a free market, tend to show that without a competition law regime, the rights of consumers and the overall economy can be seriously compromised. In colloquial parlance, the “system can be gamed”.

Over the years, many honest businessmen as well as unsuspecting consumers have fallen victim to anti-competitive conduct such as cartels and the exclusionary behaviour of businesses with substantial market power. The Organisation for Economic Co-operation and Development has estimated that illegal gains from price fixing amounted to around 10% of selling prices and that the contract prices of public procurement have fallen by about 20% in Japan after strict enforcement against bid-rigging. Indeed, the subject of bid-rigging hits close to home as it has become a topical subject in Hong Kong. By many accounts, this anti-competitive behaviour is rife in the local building maintenance industry and there is a recent case in court on the subject arising from a residential renovation project in Shatin.

Bid-rigging will be illegal after Dec 14

Before the Competition Ordinance comes into full effect, the act of bid rigging per se, i.e. without any other elements that could contravene other laws, is not illegal. After December 14 2015, it will be.

Proscriptions under the Competition Ordinance may impact upon many entrenched business practices in Hong Kong, and a phased implementation approach was adopted to allow time for businesses to review their practices and effect changes before the Ordinance comes into full force. Some businesses and sectors have already taken the initiative to change the ways they operate.

You may ask me, what does the owner of a small, startup business need to do in order to comply with the new law? Well, my answer is to have firmly in mind the Four Don’ts. When you come into contact with your competitors, whether through business liaisons or membership of trade associations, do not agree to or participate in price fixing, restricting output, allocating markets or rigging bids. Sharing of sensitive commercial information like future prices and output is also forbidden.

As the owner of a small business, it is not likely that you will contravene the law which prohibits big businesses from abusing any substantial market power they hold. We do not discourage businesses from being ‘big’ but we do punish businesses which are ‘big’ and ‘bad’. If you find yourself a victim of exclusionary behavior, for example, being boycotted by an existing business with such power or where you are invited to take part in any collusive conduct, you should lodge a complaint with the Commission. It is the function of the Commission to secure a level playing field for all businesses and your survival and success depend on fair competition.

The Commission’s enforcement actions will mainly be driven by complaints from the public. To date, the Commission has received around 400 complaints and enquiries. Most of these concerned cartels. Complaints and enquiries come from all sectors. While most people will inevitably focus on the complaints, the nature of the enquiries received is noteworthy too. Many of these came from businesses wanting to find out whether any of their practices will contravene the law once it comes into full effect. This is an encouraging sign as it shows that many businesses are making genuine efforts to understand and comply with the new law. Helping businesses to comply is the Commission’s top priority. Our focus is to get business to become, ’ready, willing and able’ to comply with the new law.

If you can take a short break of 10 minutes or so from your busy day, I would urge you to log onto the Commission’s website and watch the series of 10 drama episodes of one-minute each. This series explains the essence of the new law in a light-hearted and easy to understand way. It is an innovative and excellent education tool employed by the Commission and it has received considerable kudos locally and overseas. I hope you will enjoy watching these episodes and let us know any ‘fun’ ideas you have in delivering our messages.

Anna Wu is Chairperson of the Hong Kong Competition Commission. This is an edited version of her Letter to Hong Kong at RTHK broadcast on December 13.