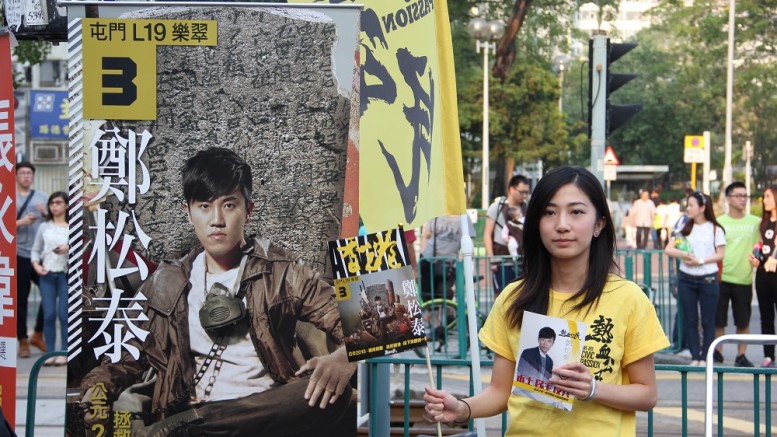 The Civic Passion team campaigns for a seat in the Tuen Mun Lok Chui constituency.

On Sunday, more than 1.47 million voters cast their ballots in the District Council election. The pro-government flagship Democratic Alliance for the Betterment and Progress of Hong Kong has retained their Number One rank in the 18 district councils, holding 119 seats. Their leaders, however, have been shy from claiming victory. The Democratic Party, which gets fewer seats compared with the 2011 polls and has their former chairman Albert Ho Chun-yan ousted in a Tuen Mun constituency, saw shining results of some young leaders. Of the 50-odd new faces being described as “Umbrella soldiers”, only seven succeeded. Whether it is case of a half-filled glass of water or one half-empty is in the eyes of beholders. Radical pan-democratic groups, including the Civic Passion, People Power and League of Social Democrats, did not get any seats.

The mixed results of the three political groupings are among the conflicting messages that have emerged at the end of the 15-hour voting. That said, three observations can be made.

There is no denying the 79-day Occupy Central protests triggered by student demonstrators have made profound impacts on the Sunday election. The civil disobedience movement has set ablaze the sense of political awareness of young people. Some candidates and political pundits have attributed the higher-than-expected turnout to the enthusiastic participation of the “first-time voters.” A fuller, detailed analysis on the voters and their voting behaviour will shed more light on the onset of a new era.

DAB legislator Christopher Chung Shu-kan, who was humiliated by an “umbrella solder” in his Siu Sai Wan constituency, has put the blame on the Occupy Central effect for his defeat. His claim should be given a grain of salt. Results of other constituencies where “umbrella soldiers” have contested show merely flying the banner of Occupy Central is not enough for winning. Some “umbrella soldiers” did not highlight the Occupy factor in their campaign. For instance, the Chinese name of the post-Occupy group, Youngspiration, carried the meaning of young people and new politics. The key words are young and new. They have emerged as a real alternative to voters who are fed up and frustrated with under-performing veterans such as Christopher Chung and another DAB lawmaker Elizabeth Quat – and want to see a change of faces. Some may dismiss district council as a low-tier talking shop. More young people have cast a vote to show they care about the city and how it should be run. There are also “first-time voters” from the pro-establishment segment in the society. They are not happy with the Occupy and want to kick the pan-democrats out. Sunday saw the first wave of change in the post-Occupy era. Sit tight for the second wave next year when voters elect their lawmakers.

Although the post-Occupy calls by Chief Executive Leung Chun-ying for voters to “vote them (pan-democrats) out” were targeted at next year’s Legco polls, it is clear he also meant for the district council elections. Pro-Beijing press have sharpened their attacks against the pan-democrats in their election coverage. If government leaders and pro-Beijing political figures have refrained from making the explicit appeal, it is because of their fears that it could back-fire in the district polls. Traditionally, voters tend to give more weight to candidates’ background and records in livelihood issues in their respective constituencies when casting their ballots. Putting the Occupy row on the election agenda risks re-igniting the sentiments of the Occupy protestors and prompting more to turn up on Sunday.

Conventional wisdom has it the pan-democrats will benefit more from a higher turnout, putting the pro-government forces in a disadvantageous position. Soon after the vetoing of the political reform blueprint, the pro-government has warned the pan-democrat lawmakers they would have to pay in the ballot boxes for their votes against the package. But the game plan was derailed after dozens of pro-establishment staged a bungled walk-out when the blueprint was put to a vote. It resulted in the vetoing of the blueprint by 28 to 8. The farcical debacle of the pro-establishment force has prompted them not to play up the Occupy issue in election. But behind the scene, the pro-establishment force’s election machinery had been in full swing to try to roundly defeat the pan-democrats. Heavyweight pan-democrats including Albert Ho Chun-ying and Frederick Fung Kin-kee have become the target of attacks. Both lot their seats to pro-establishment candidates.

Despite the setbacks, the pan-democrats, who have been conveniently branded as the Occupy trouble-makers, did not have to pay dearly for the protests as their rivals have expected. There are no strong evidence suggesting that voters have penalised them for the protracted movement. The opposite seems to be true. In some constituencies, voters gave backing to young pan-democrats for them to bring about change in district councils and society at large or, importantly, as a vote of defiance against Leung and his team’s performance.

Beijing has held out hopes the DAB-led “loving China, loving Hong Kong” force will build from strength to strength to become the mainstream force backing the government. They are adamant the pan-democrats would be shunned by voters because of their depth of ill-feelings towards the Occupy movement. True, more people had opposed the movement at its later stage when there was no sign of an end. But that does not mean they have become more supportive or sympathetic towards Beijing. Worse, the growing fears about Beijing’s failure to honour its pledge of high degree of autonomy have persistently strained mainland-Hong Kong relations. Their anxieties have been reflected in voters’ support for a range of pan-democratic candidates for them to counter Beijing’s influence, among other expectations. The line of thinking will continue to shape the minds of a lot of people in the society when they cast their votes in next year’s Legco election.