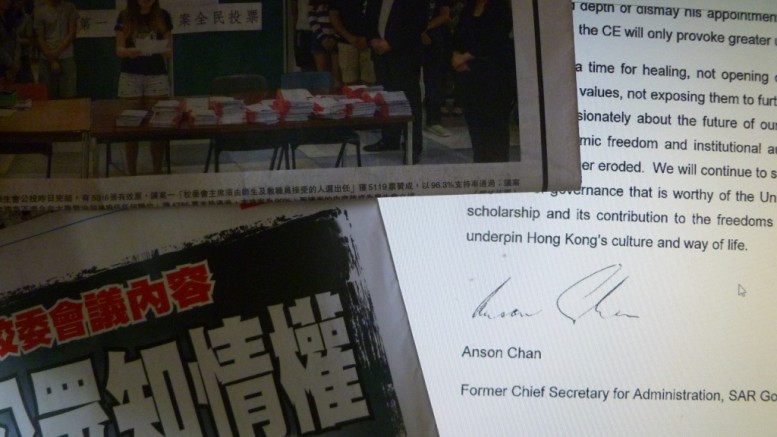 The 18th century Anglo-Irish philosopher, Edmund Burke, famously pronounced: “The only thing necessary for the triumph of evil is for good men to do nothing.” This is a maxim those who rush to vilify the whistle-blowers on the University of Hong Kong Council would do well to remember. Breaches of confidentiality are, for the most part, not to be condoned;  but what if maintaining confidentiality serves to camouflage a much greater travesty of justice? This was the dilemma faced by HKU student representative on the Council, Billy Fung Jing-en: a dilemma he would not have faced had the Council done what it should have and provided the public with a credible explanation as to why it decided to reject the recommendation of a high-powered Search Committee to appoint Professor Johannes Chan Man-mun as the University’s Pro-Vice-Chancellor for Academic Staffing and Resources.

It is deeply disappointing how easily some normally sensible commentators seem to have bought into an upside-down logic that heaps criticism on Fung, while turning a blind eye to the much more serious concerns raised  by the woeful handling of this issue by the HKU Council.  Time and again we are told that, as the University relies heavily on public funding, it must be seen to be “accountable” to the Government; it therefore follows that Government appointees to the Council have a crucial role in ensuring this “accountability”. But accountability to the public is even more important since tax payers’ money is involved. Until we have a fully democratically elected Chief Executive and Legislature, the interests of Government and the  public do not always coincide.

Many of those bandying around concepts of accountability seem to have very little understanding either of the role of the Council, as provided for in the HKU Ordinance, or the arrangements under which it is funded via the University Grants Committee (UGC). The UGC mechanism is in place precisely to ensure that our tertiary academic institutions are not subject to the same sort of detailed budgetary monitoring applicable to government departments.

In practice, the Government looks to the Committee to advise on the development goals of the universities and, in broad terms, the amount of money required to meet these goals. The bulk  of government subvention is in the form of a “block grant”, which provides for a “one- line”  allocation of resources for a funding period (usually three years) without specific requirements  as to how it should be spent. To support this arms-length approach to accountability, the  membership of the UGC includes eminent overseas academics, whose role is to reinforce the objectivity and international relevance of the Committee’s advice. As stated on its website:

“On the one hand, the UGC safeguards academic freedom and institutional autonomy of the institutions, while on the other it ensures value for money for the taxpayers. Both functions are equally important and there is a need to strike a balance.”

Of course, the ability to strike that balance depends crucially on the quality of the individuals appointed to membership of the UGC and other key advisory and executive bodies. Appointments to the UGC and to a substantial number of seats on the HKU Council (including the chairman) are made by the Chief Executive (CE), either in his own official capacity or — in the case of the universities — in his capacity as Chancellor. It is therefore incumbent on the Chief Executive to select persons who not only have relevant expertise and experience, but also the moral and intellectual integrity to act as trustees of the wider public interest in sustaining academic freedom. Such persons must be prepared to give their advice impartially, without fear or favour and — to the maximum extent possible — transparently.

Unfortunately, it is clear from the pattern of recent appointments to the governing bodies of our top academic institutions, that the current Chief Executive’s top  priority is to select only those who can be relied upon to toe the government line, thus paving the way for increasing political control of and interference in the running of our universities. This is why I and other alumni joined with current staff and students to attend an Emergency General Meeting of the HKU Convocation last September and why, amongst other things, so many of us voted in favour of a motion that the CE should no longer automatically be the Chancellor of all Hong Kong’s universities.

At the time of writing this piece we are all anxiously awaiting the announcement of who will be appointed to succeed Mr Leong Che-hung as chairman of the HKU Council. It has been reported that one Council member voted against the  appointment of Professor Johannes Chan because he was deemed to be a “divisive” figure. It will therefore be supremely ironic if, as is widely tipped, C Y Leung goes ahead to appoint Professor Arthur Li Kwok-cheung as the new chair. A more divisive figure than Professor Li would be hard to find!

No doubt the Government will claim that it is hanging tough and refusing to bow to pressure from unruly students. If so, it will be a profoundly mistaken view. Even without the latest debacle, Professor Li’s appointment would be extremely  controversial; he is widely perceived to be a bully and, in the past, no particular friend of HKU. By thumbing his nose at the breadth and depth of dismay his appointment would cause within the University and in the wider public, the CE will only provoke greater unrest.

This should be a time for healing, not opening of new wounds; a time for reinforcing the University’s core values, not exposing them to further menace. One thing is certain, those of us who feel passionately about the future of our alma mater and its continuing role as a bastion of academic freedom and institutional autonomy will not sit quietly and watch these values further eroded. We will continue to stand up for what we believe in and fight for a system of governance that is worthy of the University’s long and distinguished record of scholarship and its contribution to the freedoms of thought, research and publication that underpin Hong Kong’s culture and way of life.

Be the first to comment on "Academic freedom, transparency and accountability"