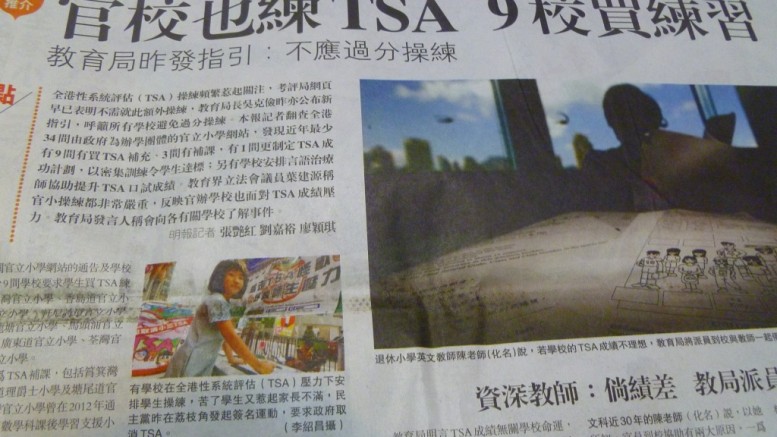 Three thoughts from the Hong Kong government’s surprise announcement of a three-month-long review of the controversial Territory-wide System Assessment (TSA) and a list of orders for schools to ease pressure on Primary pupils on Saturday.

Stood firm stonewalling calls from a Facebook campaign led by a group of parents to scrap the tests, the Education Bureau admitted deficiencies and problems with the tests and promise a review. But minister Eddie Ng Hak-kim insisted he did not see the need to cancel it.

The government resorted to their longstanding practice of playing the “review” card to buy time for averting a crisis came one day after Kau Yan School, a private primary school in Sai Ying Pun, announced on Friday that it would boycott the tests this academic year. They said the scheme was not in line with the school’s mission and was no good for students.

Their vote of no-confidence with their feet has caused a crack in the system. Although the majority of schools are government-funded who must adopt the tests, that Kau Yan School became the first-mover in saying no to the system could prompt more from their peers to follow. More important, their move could galvanise the mood of parents and teachers. The anti-TSA campaign looks unlikely to fade. The TSA is as vulnerable as it has been.

It has been open secret that Eddie Ng is not the first choice in Leung Chun-yeung’s list of principal officials after he won the 2012 chief executive race with 689 votes. Without solid record in education and politics, it did not take long for Leung and his advisers to realise Ng could be a negative asset. Ng’s failure to defuse the crisis over national education curriculum in summer 2012, which forced the young Leung administration to shelve it in the face of protracted demonstrations, has emerged as a fatal setback causing profound impacts on Leung’s reign. Except for a busy programme of “fact-finding” trips overseas, Ng has been ridiculed as a “do-nothing” minister. There have been repeated calls for him to resign.

That, however, is apparently not on the game plan of Leung. Leung has emulated other democratically-elected government in launching his own mid-term reshuffle aimed to boost his popularity, or more accurately, salvage his unpopularity. But the decision to kick out Tsang Tak-shing (home affairs minister) and Tang Kwok-bun (civil service minister), not the more unpopular Ng and some others did the opposite by causing ill feelings within the pro-Beijing and civil service circles.

That said, with less than two years to go, Leung is unlikely to axe Ng. Education has never been high on Leung’s agenda. Ng will be safe if he can avoid another national education protests in handling TSA. This is no small test for Ng, nevertheless.

Unlike the 2012 anti-national education curriculum protests when the secondary students group Scholarism led by Joshua Wong Chi-fung led the crusade, the ongoing campaign against TSA is arguably without leaders, or public face/s. But through social media, a Facebook group initiated a group of parents has drawn more than 30,000 fans within days, which eventually led to the government’s bow to pressure to promise a review. The government may remain defiant against scrapping the tests. Now that it is being put on the policy agenda, nothing is impossible. In the post-reform era and his remaining term, Leung is eagerly keen to focus on economic and livelihood issues. The TSA row is just another case showing the government’s power in agenda-setting is faced with challenges from all fronts.