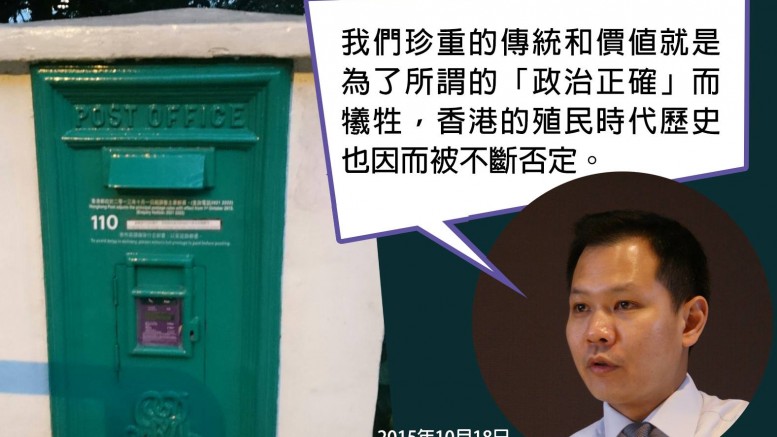 Civic Party lawmaker Dennis Kwok has lamented political correctness is creeping into Hong Kong’s systems, as evidently manifested in a spate of recent cases ranging from Hong Kong’s postboxes, Johannes Chan appointment and separation of powers debate. Below is an edited version of his Letter to Hong Kong at RTHK, which was broadcast on October 18.

All of you bear the unique historical British royal insignia. While Hong Kong is no longer a British Crown Colony, the presence of these markings reflects the colonial past of the city and they are an invaluable heritage that ought to be conserved, observed and remembered by the public.

Yet, the recent decision to cover your British royal insignia effectively negates and denies your historical value, and more importantly, the history of Hong Kong. It baffles me as to why the British royal insignia on historic postboxes is denounced as ‘inappropriate’ now, when it has been in use for decades. Such a decision is clearly politically motivated, and to prioritize politics at the cost of functionality and societal value is to overlook the crux of the matter. The determination of whether to conserve a postbox, or even historical heritage in general, ought to be based upon the criteria of functionality and societal value. Political correctness should by no means be a part of such an assessment. In fact, this is precisely why historical postboxes like you were preserved even after the transfer of sovereignty over Hong Kong in 1997 – these postboxes have their own practical function. Now, in addition to functionality, these postboxes have acquired an additional historical value which is of immeasurable worth.

What is most unfortunate is that this mind-set of political correctness taking precedence over all other considerations is increasingly pervasive in Hong Kong society today. Political correctness appears to outweigh all other facets of value and is becoming a goal in itself. The discourse about decolonization in Hong Kong leading up to this postbox controversy is only one example in many; the effects of this perverse mind-set are perhaps most striking in the recent rejection of scholar Professor Johannes Chan Man-mun as the university’s Pro-Vice-Chancellor by the HKU governing council. The absurd justifications for Chan’s rejection as revealed by the whistle-blower Billy Fung, only confirm that the decision was indeed politically motivated, and was far from being the result of a fair assessment of Chan’s academic capabilities.

The focus on political correctness is indeed a conspicuous characteristic of modern China, but such cleansing of the people’s minds at the expense of culture and societal values is also the country’s greatest tragedy. This is epitomized in the Cultural Revolution. Notwithstanding the high level of autonomy given to Hong Kong under the ‘one country, two systems’ policy, it is clear that the Chinese political culture is slowly creeping into our system, and is becoming a matter of great concern.

Part of our society is becoming increasingly intolerant to ideas which are considered to be politically incorrect, whether it be a far-reaching issue like the independence of the judicial system, an administrative decision in academia, or the British royal insignia on a harmless colonial postbox like you. The conventions and values which were once highly prized in Hong Kong appear to be readily sacrificed today for the sake of political correctness, and our colonial past is repeatedly rejected for the same reason. I believe this is a tendency that we must fight against together. Our present is built upon our history; it is important for us and the future generations to understand and embrace the history which has played so great a role in the development of our city. Let’s not let history disappear in this generation – our values must live on.

Dennis Kwok is a member of the Legislative Council and the Civic Party. He represents the legal functional constituency