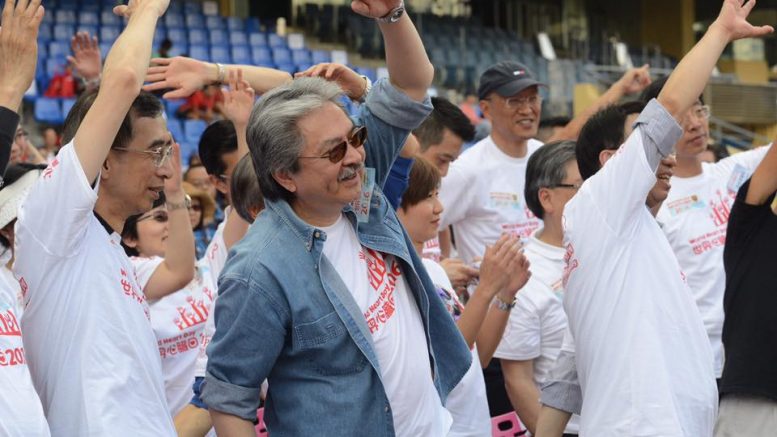 Despite a blitz of negative publicity, Financial Secretary John Tsang Chun-wah looks set to join the race for the next chief executive.

Braving “flying bullets” aimed to scare him away from contesting the next chief executive election, Financial Secretary John Tsang Chun-wah appears to be unharmed and undaunted. Quite the opposite. He has given more signs he is close to declaring his candidature.

Read as if it is a gist of his election statement, he envisioned a better Hong Kong lies ahead if the city maintains stability in a blog post on Sunday.

Tsang has admitted incessant bickering and sharpened conflicts have worsened schism in the society in recent years. But he argued extremist views were in the minority and the majority of people embraced centrist ideas.

He expressed fears that Hong Kong would lose its advantages if it failed to stay united.

“We have not magic solutions to the present complicated social problems. But if we have a peaceful atmosphere and a harmonious environment, we can accommodate differences and work for a consensus based on mutual trust.

“I believe we can go further and higher albeit with a small step at a time. Ahead of us are even more beautiful scenes.”

Tsang’s blog came one day after he spoke in length on his question of “to run, or not to run” at a Commercial Radio programme. He revealed he was “actively” considering joining the fray.

“Many people, no matter if they know me or not – or even those on the internet – are very supportive of me joining the election… They feel there are divisions in society and governance is in difficulties, and ask if the situation could be improved.

“If something is beneficial to Hong Kong and the people of Hong Kong, I would actively consider this,” Tsang said.

In the radio interview, he also revealed he was also urged by some friends for him not to run, citing negative consequences such as smearing campaign.

On its face, he has set out the pros and cons of his bid for the top post. A closer at his remarks and his blog shows clearly he is determined to dip into the dirty water to help build a better Hong Kong.

That Tsang seems to have become more forthcoming and direct in his election-speak contradicts sharply with a report carried by an online media close to the Sing Tao News Group, that said he was given a “red light” by two senior mainland officials, or more bluntly, a “no” for his election bid.

They are Zhang Xiaoming, Director of the central government’s Liaison Office in Hong Kong, and Wang Guangya, head of the State Council’s Hong Kong and Macau Affairs Office. The report did not elaborate its source of information.

In another clear salvo against Tsang, spokesperson of a groups calling themselves Silent Majority of Hong Kong, Robert Chow Yung, claimed a senior leader has laid down an all-important task for the next chief executive.

Chow was referring to Zhang Dejiang, chairman of the National People’s Congress, who met with a delegation led by Chow in Beijing last week. Chow quoted Zhang as saying a good CE candidate must launch a “struggle against (the advocates of) Hong Kong independence.” Zhang reportedly said the anti-independence struggle was an task that was “urgent, a must and cannot be ignored.”

Chow argued Chief Executive Leung Chun-ying has already been “seen doing something” on the anti-independence front, citing the government’s judicial review of the legality of the oath-taking of four more pan-democrat lawmakers on Friday. Without naming Tsang, he said other potential candidates have been silent on the issue.

He said Zhang gave no lights on the potential candidates at their meeting.

It is still unclear whether Tsang has been clearly told not to run as the online report said. Even if, a big if, it is true, it cannot stop Tsang from going ahead, as Leung Chun-ying is understood to have done so, ignoring words by senior mainland officials for him not to challenge former chief secretary Henry Tang Ying-yen, who was Beijing’s original pick for the top post.

Learned from the election drama in 2012 that ended with Beijing’s decision to drop Tang and back Leung, Beijing looks unlikely to have already ruled out Tsang at this stage. If they have done so, it could mean they have already made up their mind, giving Leung his second term.

Within Leung’s support shrinking, Beijing seems to remain undecided on the question of “support Leung, or not to support Leung.”

Against that backdrop, Tsang can expect more stray bullets and salvos against him are yet to come.