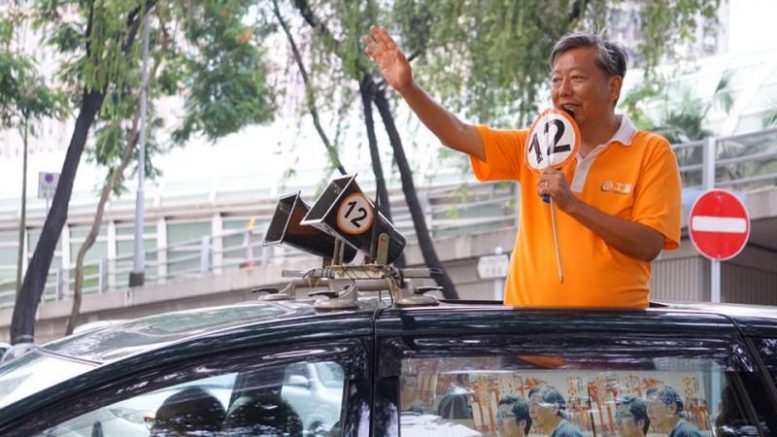 Veteran unionist Lee Cheuk-yan lost his seat in the September 4 Legislative Council election. With only one seat in the new legislature, the Labour Party he co-founded faces a survival test.

I cried on stage when having our Labour Party photos after the (Legco election) result was announced with Labour Party seats reduced from four to one. The shedding of tears was not because of my lost in the Legislative Council election, but it hurts to think of the efforts of our team that had fought together with me for the past twenty years for helping me got elected and making my Legco position fruitful for the Labour Movement. And now this must all end.

For me personally, leaving Legco can be a blessing in disguise. I had been there for twenty years and it may be time that I can do more outside of the Council, going back to my root of organizing trade unions and continue to build the power base for future changes.   I feel always blessed that I have been able to work for my ideal with passion.

Looking back on my twenty years of Legislative Council work, I can say I witness the changes over the years. At the time of Legco before the handover, I am the very few who seldom wear a tie and it was time when some speeches were still made in English.

The most memorable scenes of those days was the ability for Legco Members to submit Private Member Bill under the Rules and Procedures at that time. With this weapon in hand, I was able to draft a private member bill on maternity leave pay and forced the Government to agree to an increase from 2/3 of monthly wage to 4/5. It was an immediate taste of success on my swearing in as Legco Member back in 1995.

Then came the most important of my private member bill, the Right to Collective Bargaining. On that Bill I am racing with time to draft and pass the law in two years time to make it before the handover. I engaged a Cambridge professor to draft the complicated Bill and was able to submit it to Legco and got it passed by on June 29, 1997. The business sector was alarmed and enraged over the passing of my Bill because it meant that employers have to recognise trade unions for the purpose of Collective Bargaining. This will help to strengthen the (trade) unions in Hong Kong once they get the legal framework for recognition.

The Government acted immediately for the interest of big business and freezed the law in two weeks time and abolished it after four months. After 1997, I was no longer able to submit private member bill under Article 74 of Basic Law.  It is obvious that the drafters of Basic Law want to curtail the power of Legco Members and strengthen the power of the non-democratically elected administration.

After the handover, it is more difficult to force changes upon the Government. I then started the 12 years marathon fight for setting up a minimum wage for all workers. My first motion on minimum wage was supported only by nine Legco members. It was the campaign led by the Hong Kong Confederation of Trade Unions that made change possible. We first achieved a minimum wage for workers hired by Government subcontractors after much publicity on the hardship of subcontractors’ workers. Then we put put Hong Kong to shame with stories after stories of workers| horrendous working conditions. One toilet worker worked for HK$7 per hour and seventeen hours a day and had to stay inside the toilet for his nights.  Finally, the Donald Tsang Government, who had said to me at his time as Financial Secretary that he will never agree to a  law on minimum wage, backed down and legislated on minimum wage.

The other unforgettable legislative event is the defeat of the Legislation on Subversion  (Article 23). This can be a classical textbook case of the victory for the power of the people against authoritarian law. How a movement grew from a march of 6,000 people to a march of over half a million people. I remember we had called for the total surrounding of Legco if the law go ahead on the July 9, 2003. Everyone was worried about heightened confrontation and even bloodshed on that day but finally the Government withdrew the infamous law.

No standard working hours a regret

On my departure from Legco, my only regret is that I cannot end my Legislative Council work with the legislation on standard working hours. I know the details of legislation in other countries and I know the industries from the workers ’perspective and can definitely contribute to the legislative process. Now that I am outside, I cannot contribute as a legislator but we have plans for the future.  We will set up a think tank on Labour and Social policy to continue our work on influencing Government policies and fight for the standard working hours legislation on the streets with sound research.

I recalled the years of unity for the opposition camp and can only sigh on the present days of fragmentation. I hope the newly elected legislative councilors on the opposition camp can be more united against the authoritarian Hong Kong regime that bowed to the wishes of the Chinese Communist Party suppressing democracy in Hong Kong and collude with Big Business against the ordinary people that are trying to make ends meet and have a roof over our heads. I believed every responsible legislators on the opposition should put the cause of the people first and not the interest of oneself or the political group one represents.

It is now more difficult for the Labour Party with the number of legislators reduced. The recent loss in the Legco election was a blow to our development when we have to go by with less resources and less voice in Legco. This can be compensated with hard work on campaigns outside of Legco together with the civil society for the improvement in workers protection and other livelihood issues. We will try to bring our fight on the street and the voice of the civil society to the Legislative Council with our lobbying work. After our loss the elections, there are a lots of goodwill and we should turn this into our assets for the future fight with more members and more donations. And we will come back. I hope you are with us in our future fights.

This is the speech of outgoing unionist legislator Lee Cheuk-yan, who lost in the Legislative Council, at RTHK’s Letter to Hong Kong broadcast on September 25.

Be the first to comment on "‘We will come back,’ Lee Cheuk-yan says"