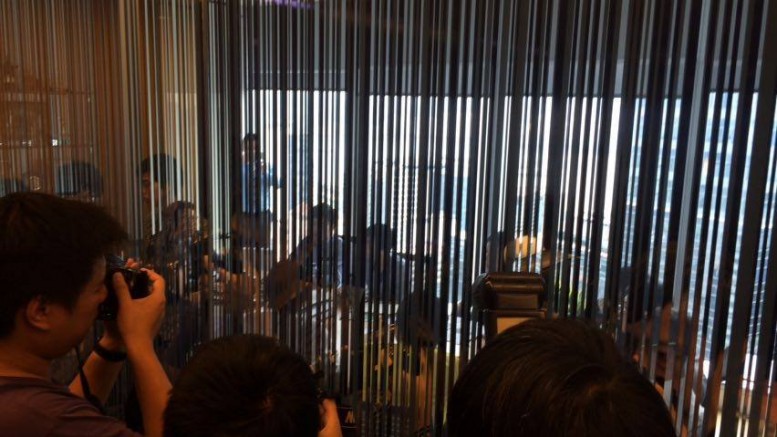 Pan-democratic political parties stage protest outside the headquarters of the Link Reit over their sale of shopping malls, claiming such move causes a surge of prices in shops there.

In what is billed as “farewell dinner,” Chief Secretary Carrie Lam Cheng Yuet-ngor had hosted banquets for friends frequently at her official residence recently On at least one occasion, she reportedly singled out three pressing livelihood issues. They are MTR fare, shopping arcades run by the Link and the hedging of Mandatory Provident Fund.

Livelihood is no small matter. The MTR fare issue concerns the daily transport expenses of ordinary citizens. Link is the landlord of many wet markets and shopping halls in public housing estates. More recently, the Link Reit is faced with sharp criticism for forcing small business out of business, making the way for the entry of big conglomerates. Prices of goods at markets and shopping centres in public housing estates have risen continuously. Residents are angry. The issue of MPF hedging hinges upon the question of whether the retirement benefits of employees are being “hedged” by employers.

Some of the pro-government analysis argue the source of grievances of Hong Kong people towards the government stems from their anger over the lack of improvement in livelihood. And why no improvement? They argue it is because some in the Government are still acting like a miser; they are unwilling to take drastic moves and make big spending to improve livelihood. In addition to the three issues, some have urged the Government to buy up all three cross-harbour tunnels and then unify their tunnel toll so that vehicles will not flock to the tunnel that has lower toll. It is further argued that the Government can spend to intervene with matters that affect livelihood. The goal is to lessen the livelihood burden of people so that they fell less angry with the Government.

Be the first to comment on "Will Govt buy up public utilities for livelihood improvement?"