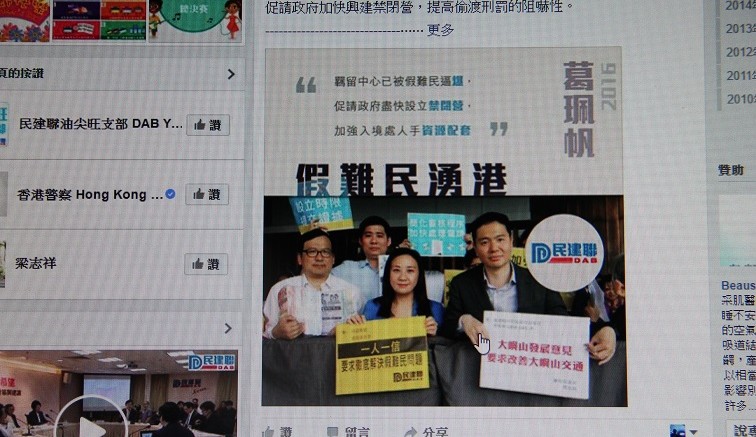 Political parties are using Facebook to connect with the people. A proposal by the election watchdog to tighten rules for election-related content on Facebook has caused a stir.

Something is wrong about the upcoming elections in Hong Kong in 2016 (Legislative Council election) and 2017 (Chief Executive election), before they even have started. Our election watchdog, the Electoral Affairs Commission (EAC), apparently is telling all of us in Hong Kong to stay off the Internet and social media, or you may be breaking the law.

That may sound incredible in this day and age, when people’s lives revolve around social media, and all the messages they share among friends and strangers. But just as more and more people in Hong Kong, as in other parts of the world, are beginning to engage in more and more sharing and discussing about politics and elections on popular social media platforms such as Facebook, Instagram or Twitter, or popular local online services such as Hong Kong Golden, as well as messaging platforms such as WhatsApp, the EAC is telling us that such messages may be considered as advertising under the law, and unless these messages are previously approved by the candidates or their agents, those who post and share these messages may be liable to the offence of incurring costs to candidates without their consent, under election laws.

In fact, earlier this month, the ICAC launched an investigation of a supporter of one of the candidates in the February Legco by-election for the New Territories East, who reportedly shared support messages on Facebook to other users. According to the EAC, expressing support for a candidate to enhance his or her chances to be elected, or criticizing a candidate to lessen his or her chances to be elected, can both satisfy the definition for an election advertisement. It doesn’t matter whether you are sharing or writing a text message, creating your own graphics or videos to share, changing your profile pictures, or even adding a particular hashtag to express your view for or against a candidate, you may already be breaking the law, said the EAC.

I’m sorry, but do any of the three members of the EAC use any of these social media platforms? Do they know what they’re talking about? Do they know that the Internet has become a critical or even deciding factor in many recent elections, from Taiwan to London, as well as the U.S. presidential election. Researchers are actively analyzing between the social media engagement scores of Donald Trump and Hillary Clinton, measuring the effects of the likes they get, the mentions they receive, and the sharing and retweets they get with their posts. Yet in Hong Kong, our election watchdog is effectively telling us to shut up online. In terms of the threat against freedom of expression, I don’t know if threatening to sue is worse or better than Iran shutting down social media altogether during elections, but, this still virtually guarantees Hong Kong will end up as a laughing stock of the free world.

What’s even more laughable, but not funny, is that, our EAC also told us in their press briefing earlier in the month that while a simple “please support so-and-so” message could be deemed election advertising, if you have stated any of the candidate’s merits or demerits as reasons, that would possibly constitute a commentary, and you might be off the hook. So, don’t just say I support Mr X. But you can instead say, I support Mr X because he is handsome. I don’t know if I should laugh or cry over something so stupid.

What happens here is so common in Hong Kong these days, where we have outdated laws, rules and regulations, and instead of changing the rigid rules that can no longer apply to new conditions, our bureaucrats would still force new stuffs into their old cans. To them, the less they do, the fewer risks they would have to take. What they don’t know, they try not to learn.

Government our problem, not solution

Sadly, this is the government that is talking about encouraging innovation and developing technology day and night, but they don’t admit that in fact, from the Uber incident to election advertisements, our government stands right in the path of innovation, blocking progress. The government is our problem, not our solution. So, with two of my fellow legislators, Dennis Kwok and Alvin Yeung, we launched a Facebook campaign that we called “What do you know about my hashtag”, to highlight this gross stupidity looming over our upcoming elections. We have written to Facebook, as well as the Secretary for Justice and the Secretary for Innovation and Technology, to see if they can enlighten us about the costs of various social media actions, such as changing a profile picture, posting a status or a graphic, making a comment, tagging a user or a page, streaming a live video, or putting up a hashtag. So far, Facebook has officially replied to us that they do not consider that there would be any cost involved.

Let’s see if our government secretaries or the EAC can shed light on any hidden costs that even Facebook doesn’t know about. In the meantime, I hope each of you will submit your views and questions over this matter to the EAC during its public consultation, before June 9. Tell them what they don’t know about your hashtags.

Charles Mok is a legislator representing the information technology functional constituency. This is an edited version of his Letter to Hong Kong broadcast at RTHK 3 on May 29.