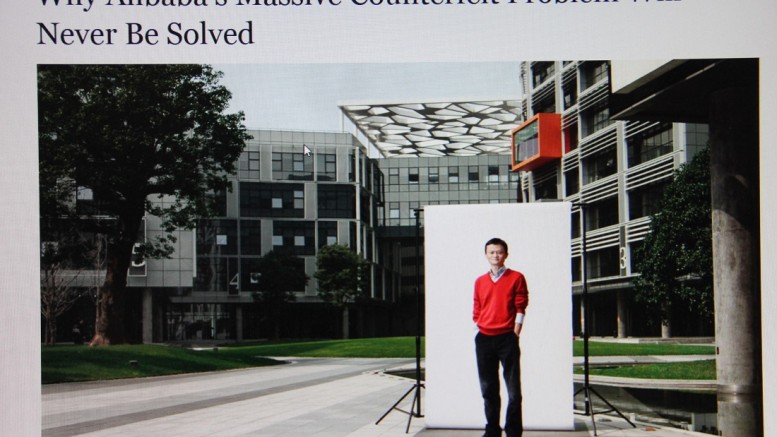 Alibaba founder Jack Ma hit the cover of the Forbes magazine again. This time it has nothing to do with his latest position in the world’s ranking of rich men and women. Headlined “His $200 Billion Empire Is Built Atop A Mountain of Fakes,” Ma’s online bazaar, called Taobao, has emerged as the subject of criticism by the business publication, which has not been known for its sharp tirade against corporations. It has raised an intriguing question about whether it signifies the beginning of Jack Ma-bashing publicity among Western media.

The rapid growth of Taobao, an e-commerce platform, in the recent years has brought about sea change in the e-commerce ecology. Take retail sales as an example. Taobao’s Chinese retail sites handle a total of US$394 billion last year, which is five times the volume of eBay. Based on the sales volume, Taobao has swallowed up a big part of the country’s e-commerce business. The consequence of a “one-platform monopoly” is that the bargaining power of product suppliers has been eroded.

According to a report issued by the Bain consultancy firm in May, the total revenue of global retail sales of luxury goods in 2015 will drop by two to four per cent compared with last year. Does it have to do with the proliferation of sales of fake products on e-commerce platform?

Louis Vuitton, a luxury brand, has suffered a serious setback in the China market in 2013. They blamed the rampant growth of fake and counterfeit LV products in almost every corner of China, citing their survey that showed 94 per cent of tycoons said they would not buy products of a brand with counterfeits available everywhere. Ordinary consumers also they would also shun buying the genuine LVs, opting for products available on Taobao. In October 2013, Taobao and LV signed a letter of memorandum to avoid counterfeits. It seems that the memorandum did not work. Luxury brands have decided to go to war with Alibaba.

The tussle between Taobao and luxury brands have been going on for some time. The recent fresh round of salvos against Taobao, with some accusing their business model of “causing harm to the country” is worth closer scrutiny.