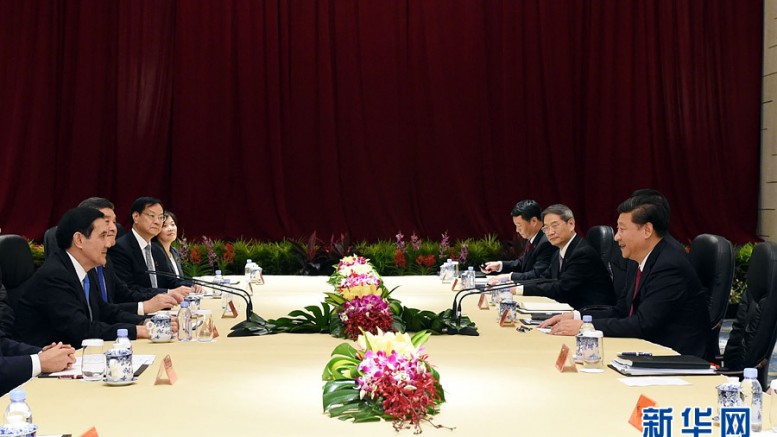 The ostensible motive for the historic handshake last Saturday between Chinese President Xi Jinping and Taiwan counterpart Ma Ying-jeou is to anchor cross-Straits relations on the “one China” principle.

Yet there are more urgent – and politically significant – considerations as well. Presidential elections are coming up in Taiwan in January. The candidate fielded by Ma’s Kuomintang (KMT) or Nationalist Party, Eric Chu, is lagging behind his rival from the opposition Democratic Progressive Party (DPP), Tsai Ing-wen by a margin of more than 20 percentage points in most opinion polls.

Both Xi and Ma hope that the optimistic vibes generated by the first meeting of the leaders of the Chinese Communist Party (CCP) and the KMT in 66 years will persuade undecided voters in Taiwan to fall for the ruling party.

Yet the most important take-away from the Singapore meeting is that the Xi administration has signaled its determination to secure a terminal solution to the Taiwan problem within the lifetime of the Chinese strongman.

Xi, who is likely to remain China’s top ruler until the 21st Party Congress in 2027, hopes that at the very least, “political and reunification talks with the Taiwan leadership” will have begun well before he leaves the scene. So far, communications and agreements between Taiwan and the mainland have been restricted to business, investments and transport issues. Politics has remained a big taboo.

While in his speech at the opening of the talks, Xi used the proverb “blood is thicker than water” to characterize relations between mainlanders and Taiwan “compatriots,” the President and CCP General Secretary is serious about setting a time-table for reabsorbing the “breakaway province” of Taiwan.

It is understood that Xi has consulted with both his civilian and military advisers – who include generals in the Nanjing Military Region, which is “in charge” of the Taiwan Strait – about how to speed up the reunification process.

There are ample reasons why the CCP leadership should want to settle the Taiwan issue sooner rather than later. The rise of the DPP (which was the ruling party from 2000 to 2008) is emblematic of fast-shifting opinions among Taiwanese – particularly those under 40, almost all of whom were born on the island.

The majority of intellectuals and young people on the self-ruled island have become worried about Taiwan’s increasing dependence on the mainland. Very few of them want any kind of political association with the CCP regime, which is turning back the clock on political liberalization.

Ma, whose popularity rating has dropped below 10 percent, has been accused of “selling out” Taiwan interests to the CCP so as to maintain the KMT’s grip on power.

The Xi administration is paranoid about the fact that Tsai, a charismatic leader known for her personal integrity, would roll back KMT-initiated policies geared toward the promotion of cross-Straits economic integration and people-to-people interchanges.

Political analysts in Beijing said it was significant that despite his pledges of more favorable economic policies toward Taiwan, Xi did not promise to give up the use of military forces regarding the self-ruled island.

In his press conference, Ma disclosed that he had asked Xi about the estimated 1,500 missiles – based in People’s Liberation Army (PLA) facilities in coastal provinces – that were targeting Taiwan. According to Ma, Xi’s reply was that the missiles were part of the overall deployment of military hardware and that they were not aimed at Taiwan.

It is understood, however, that the PLA has periodically conducted computerized and real-life exercises regarding ways and means of taking out Taiwan’s defenses within 24 hours.

Since Xi took over as supreme leader three years ago, the President and commander-in-chief has stoked the flames of nationalism through aggressive measures such as the reclamation of islets in the South China Sea. At a time when economic growth is slowing and riots and disturbances all over China are increasing, nationalism has become the most potent pillar of the CCP’s legitimacy.

Setting a time-table for the “liberation” of Taiwan serves the same purpose of diverting the attention of disaffected elements within China towards lofty goals such as “the great renaissance of the Chinese people,” which was repeatedly cited by Xi in his talks with Ma.