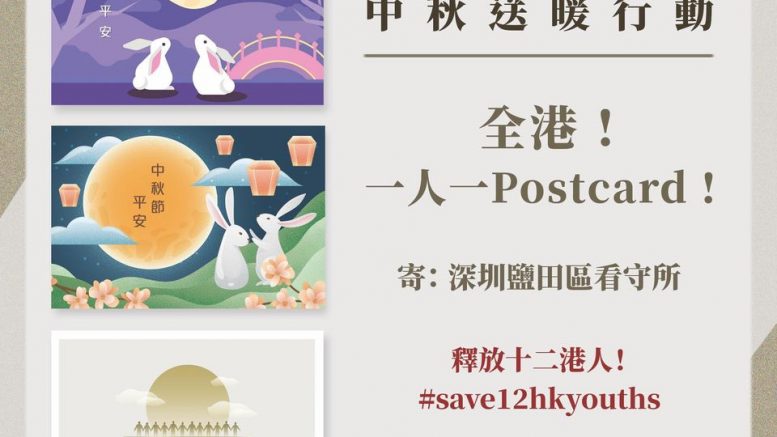 A concern group calling for the public to send Mid-Autumn Festival greeting cards to the 12 Hong Kong detainees in Shenzhen .

Just two and a half months after the national security law for Hong Kong was implemented, the worst-case scenario of the city envisaged by pessimists before the law took effect has become somewhat real in the SAR. What could be even worse is that that may not be the worst; the worst is yet to come.

The most recent case of the power of the law to breed fears involves a group of 12 Hong Kong people who are now being held incommunicado at a detention centre in Shenzhen. They were intercepted by Guangdong coastguards on September 23. There are fears that they may become the first batch of Hongkongers to face national security charges in mainland courts.

Of them, 11 had previously been charged with protest-related offences in Hong Kong. Only one had been arrested under the national security law.

But on Sunday, Chinese Foreign Ministry spokeswoman Hua Chunying claimed on Twitter the 12 detainees who tried to flee to Taiwan by speedboat are “separatists” who have been trying to split Hong Kong from China. She did not explain how that has been or could be done.

Earlier, police in Shenzhen confirmed the Hongkongers were under criminal detention in the city’s Yantian District on suspicion of illegally crossing the border. Investigation was ongoing, it said.

“Police will protect the legitimate rights and interests of criminal suspects in accordance with the law,” the Shenzhen authorities said.

Remarks made by the ministry spokesman, however, show the case looks likely to be upgraded to the national security level, raising more doubts about the official assurance that the rights and interests of the 12 Hongkongers would be protected.

Facts speak louder than words. On Saturday, family members of some of the detainees broke their silence to plead for Government help to ensure those in detention could choose their own lawyers and to provide medicines to those in need. Some have been assigned with “government lawyers” with their consent. Believe it or not.

The plight of the 12 Hongkongers has given an unwanted proof to fears voiced out by many people about the doom and gloom of anyone facing a trial relating to national security law in mainland court.

Promises made by officials and pro-Beijing figures that “only a very small number of cases” will be heard in the mainland and that the referral process will be stringent have turned sour.

Any hopes that the mainland authorities will make efforts to ensure not just justice be done but to be seen to be done look dim in light of the secrecy of the detention.

The captured Hongkongers case has stoked fears that what could be clearly criminal offences such as illegal entry into mainland waters might be remade to fall within the long arm of the national security law.

In a similar vein, what should have been a lawful expression of opinions such as “Five demands, not not less” and an independent probe into police brutality might now be taken to court for charges of seditious speech.

If there were hopes that the national security law is aimed to frighten, but not to bite, events unfolded since July show it is aimed to serve both purposes to help put an end to protests as soon as possible.

Judging from the fact the case of Tam started with an investigation along the line of a violation of the national security law before detectives tried to establish a case of sedition from a colonial law, there are reasons to believe Beijing wants to see early effects of the law.

The big question is what effects Beijing would like to see, in addition to an end to massive and protracted protests in streets.

There has been no shortage of hints that Beijing, or at least the hardliners there and in Hong Kong, would like to see “rectification” of certain important sectors of the society for it to move along the right course of “one country, two systems.”

Chief Executive Carrie Lam has said publicly she would double efforts to “rectify the wrongs” in sectors including education, civil service and the media.

If anything, the capture of the 12 Hong Kong people has given a grim warning of the great difficulty in escaping from the national security law.

This article was first published on Apple Daily website on September 16, 2020.