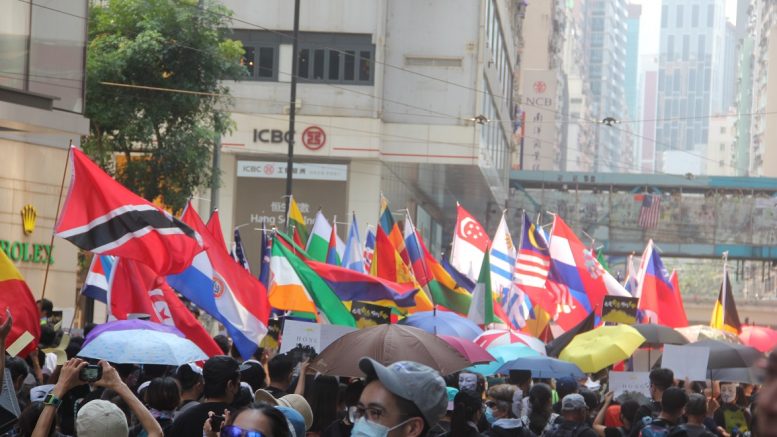 Protesters raise national flags of foreign countries at a rally.

The Government handed a sum of US$6.2 million (HK$48 million) to an international public relations firm Consulum in July to formulate plans  “to highlight Hong Kong’s recovery and help rebuild confidence in Hong Kong as a place to invest, do business, work and live”.

The choice of the firm, who had worked on PR programmes for the Saudi Arabian government, had raised some eyebrows. Proclaiming itself to be Asia’s world city, doubters and cynics were scratching their heads trying to ascertain the relevancy of the PR campaign for the oil-rich nation to Hong Kong.

Two months on, a string of fresh doubts set in. This time, it is about the relevancy of the multi-million-dollar project to the future development of the city – if there is a future, a big if.

First, it is almost impossible to make any meaningful assessment of the economic ramifications caused by the Covid-19 pandemic because of the simple fact that the only certainty of the crisis is uncertainty. Despite signs of an end of the third outbreak, fears of the fourth onslaught of the virus in winter cast a long shadow over the city’s economic health, not to mention an economic recovery.

More importantly, the city has plunged into an abyss following months of socio-political unrest sparked by protests against a government bill on transfer of fugitives, which soon morphed into the biggest political crisis since 1997.

Frightened by the growth of pro-independence thinking among the populace, in particular the young people, and the power of “colour revolution” elsewhere, the ruling Chinese Communist Party has imposed a national security law for Hong Kong.

The law took effect on July 1, which marks the city’s 23rd anniversary of its return to Chinese sovereignty. Beijing is holding out hopes it will put the city on the right path of a Special Administrative Region.

Whether it is the right path is anybody’s guess. Events unfolded since then show the city is moving farther away from its past as a Chinese city with international attributes towards a SAR with mainland China characteristics.

On July 15, US President Donald Trump signed an executive order ending the city’s preferential trade treatment, and enacting a bill that would require sanctions against foreign individuals and banks for contributing to the erosion of Hong Kong’s autonomy. “Hong Kong will now be treated the same as mainland China.”

The political and economic fallout of the national security law is just beginning to roll out.

Last week saw the resignation of a top Australian judge who sat on Hong Kong’s Court of Final Appeal as one of the non-permanent overseas judges. Justice James Spigelman was said to have tendered his resignation early this month because of concerns about the national security law.

Early this month, a group of United Nations human rights experts wrote to China to warn that the national security law posed a serious risk to the city’s political and civic freedoms. They said the law should be reviewed and reconsidered.

Major Western countries have suspended their extradition agreements with Hong Kong. They have upgraded travel warnings to their citizens of the potential risk because the law will also apply to non-permanent residents and people “from outside Hong Kong… who are not permanent residents of Hong Kong.”

A survey conducted by the American Chamber of Commerce in Hong Kong in August found nearly four in 10 members are considering relocating from Hong Kong due to the national security law. The New York Times has already relocated its digital team to Seoul, also citing concerns about the law.

The city has slid into a downward spiral of negative publicity in international media, taking its toll on its global image.

The Government said in July Consulum would conduct research to “shape an issues and crisis management programme” to deal with the information needs and perceptions of Hong Kong’s key global stakeholders.

The company may not be even able to get a hand of the crises facing the city and those that may come, not to mention managing them.

And even before they come up with some brilliant ideas and action plans to rebuild confidence in Hong Kong, the enormity of damages to the city’s strengths and characters is too big for PR professionals to repair.

This article was first published on Apple Daily website on September 23, 2020.

Be the first to comment on "A US$6.2 mln confidence-building project that goes nowhere"