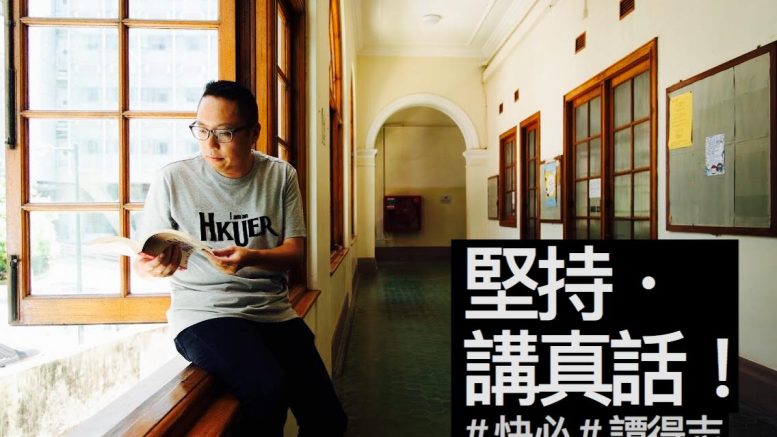 People Power's Tam Tak-chi, faces seditious charges for speeches he made publicly, which include the theme slogan of the anti-extradition bill protests, 'Five demands, not one less.'

In an intriguing frank admission, a senior official at the Hong Kong Police’s national security team said they had considered using the national security law to arrest a People Power leader, but changed their mind after consulting the Department of Justice.

Tam Tak-chi, a vice-chairman of the group, was arrested on Sunday. Police said he was suspected of uttering seditious words at street booths across Hong Kong between June and August.

Senior Superintendent Steve Li said they decided the Crimes Ordinance was the “most appropriate” in dealing with the case after they discussed the case with the Department of Justice.

Referring to a series of street anti-epidemic talks held by Tam, Li claimed the words and publicity he used were mostly to “incite hatred and contempt against the Government and also to stir up discontent and disaffection from Hong Kong and other places.”

That Li took the initiative to reveal they had intended to use the harsher security law to arrest Tam has ironically given credence to fears that the national security law could be “weaponised” to penalise people who hold political dissenting views.

It is also a slap on the face of Chief Executive Carrie Lam, who expressed surprise and bewilderment over the idea of “weaponisation” of the national security law. She insisted the law was aimed to punish the bad guys.

She did not name names. But one day before she spoke, Anthony Cheung Bing-leung, a political scientist who became a minister in charge of housing and transport during the Leung Chun-ying administration, has said fears of abuses of the national security law have prevailed in the society.

Cheung said it would be tempting for law-enforcement bodies to use the national security law to punish people who might have only committed other criminal offences such as public order ordinance.

The Tam case has proved Cheung’s fears are not unfounded and, worse, dampened hopes held in some quarters of the local and international community that the national security team would exercise restraint when implementing the new law.

One of them is president of the UK Supreme Court in London, Lord Reed of Allermuir. He made a statement in July, saying the law “contains a number of provisions which give rise to concerns. Its effect will depend upon how it is applied in practice. That remains to be seen.”

In view of the broadness and vagueness of the law, legal experts shared a similar wait-and-see attitude as they held out hope for restraint.

Almost two months on, restraint seems to be the hardest act for the national security team, who might have come under pressure to bring about immediate impacts, at least as a deterrent, on the city’s pro-independence activities.

On the first day of the new law on July 1, police officers lost no time to raise a “purple flag” carried with a warning of a breach of the national security law when protesters chanted slogans and hoisted flags with the word “Hong Kong independence.” Police had later said in a statement the theme slogan of the anti-extradition bill protest, “Liberate Hong Kong, revolution of our times,” could also be secessionist.

Although lawyers cast doubts about the claim, many people dare not take the risk. The theme slogan has become less prominent in public places with group gatherings since July.

On Sunday, people took to the streets to vent out their anger over the postponement of the 2020 Legislative Council election, which was originally scheduled for the day.

In view of the toughness of riot police’s operation and the social distancing measures in the past few months, there were noticeably fewer people who joined the march, which was officially declared unlawful.

There was largely chaos with no violent clashes between police and protesters. Still, Police had arrested almost 300 people. One was arrested for a violation of the national security law for chanting pro-independence slogans.

In various aspects of life, the damaging impacts of law are beginning to be felt. Cases are aplenty. Some are unconfirmed. Foreign correspondents fact unusual delays in their visa renewal. Speculation is rife that it is because cases need to be vetted by a newly-set up national security unit under the Immigration Department.

More unwanted changes are seemingly on the horizon. In an interview with Phoenix TV earlier his month, Mrs Lam singled out three sectors whose “wrongs ought to be rectified” in her remaining term. They are education, civil service and the media.

All in the name of upholding national security.

This article was first published on Apple Daily website on September 9, 2020.