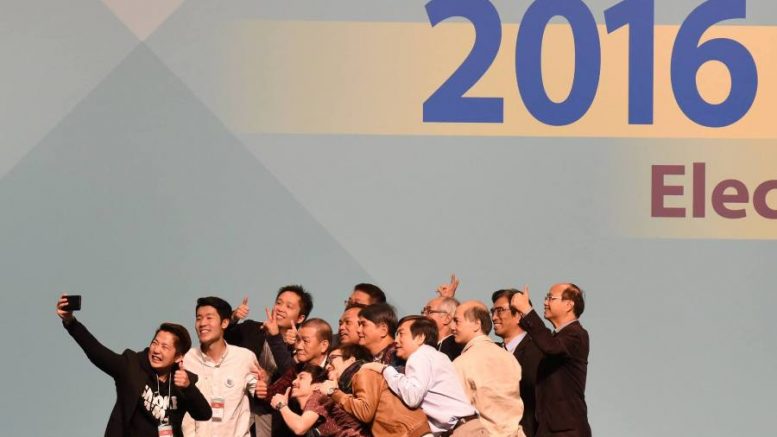 Pro-democracy candidates took more than 325 seats in the Sunday Election Committee subsector election, enough for them not just to name their own candidate/s, but swing the votes.

Twenty years ago, the then Chinese President Jiang Zemin came forward towards a Hong Kong delegation to find Tung Chee-hwa, then shook hands with him. The word “Jiang hand-shake” had been used by a prominent Chinese newspaper columnist since then to refer to Tung, who was to become the city’s first chief executive after the hand-shake.

20 years on, Tung, who quit his job prematurely in 2005 because of “health” problem, warmly embraced Chief Secretary Carrie Lam Cheng Yuet-ngor yesterday. They were attending a memorial event marking the 79th anniversary of the Nanjing Massacre.

It was not a rare scene. They were seen embracing each other on December 2 (picture) when they attended a business chamber ceremony, for instance. 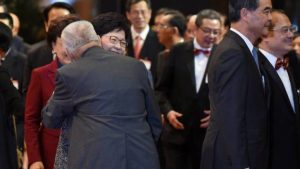 If yesterday’s “Tung embrace” has raised some eyebrows in the politics-watching circle, it was because of the timing. It came just three days after the shocking “not-to-run” decision announced by Leung Chun-ying, who will follow the footsteps of Tung to depart prematurely. It is widely known that he was eagerly keen to have his second term.

Seen as Beijing’s “Plan B” after Leung bows out from the chief executive race, Mrs Lam has emerged as a favoured candidate to succeed Leung soon after the Friday afternoon announcement.

On Saturday, the government’s Number Two told reporters she would reconsider her retirement decision, saying circumstances changed drastically. Her swift reversal of her decision to retire after July 1 is seen as a move to pave the way for joining the fray. Her bid is no longer a question of if, but when.

Mrs Lam may remain undecided. But her rivalry with Tsang, both seen as the leading contenders, has become ostensible.

Also yesterday, Leung has claimed Tsang’s departure at the final stage of the drafting of the Policy Address and the Budget would “greatly affect” their work.

Although he stopped short of blaming Tsang, his remarks put the financial chief’s resignation in a negative light.

As if it was part of an orchestrated Tsang-bashing pre-campaign tactic, Mrs Lam singled out passages in studies compiled by the Long Term Fiscal Planning Working Group led by Tsang in 2013.

She cited two passages in the report. One said that “an expanding and ageing population will put pressure on social welfare and health services expenditure”. Another said: “With the population ageing, the size of the labour force is set to decline, posing a threat to, if not dragging, economic growth and putting pressure on government revenue.”

Without naming Tsang, Mrs Lam said: “So the elderly somehow has been associated with threats, and pressure and dragging our economic growth, which is most unfair.”

The offensives of Leung, Mrs Lam and the warm embrace of Tung are clear signals aimed to send a message to the pro-establishment camp and the society at large that Mrs Lam is now Beijing’s favoured choice for the next chief executive.

The early move seems to be calculated to lessen speculation and confusion as the chief executive race enters a new phase following Leung’s announcement, Tsang’s resignation and an expected declaration of campaign by Regina Ip Lau Suk-yee on Thursday.

With hindsight, the 1996 “Jiang handshake” had emerged as Beijing’s blessing, which was critically important in securing votes for Tung in the 600-member Selection Committee vote in 1997.

Whether Beijing, or its emissary such as Tung, could direct enough members in the just-elected Election Committee to vote in accordance with their wish has become increasingly unclear in the wake of the Sunday election and Leung’s pull-out from the race.

It is widely believed that Beijing’s worries about the difficulty in grabbing a majority of seats in the 1,200 electoral body to back Leung because of his unpopularity and leadership problem have prompted them to abandon Leung.

If that is the case, Mrs Lam may run into the same difficulty in canvassing votes in the Election Committee. Not to forget she has already been labelled as the “female version of Leung Chun-ying.” Although Leung will be gone, ABC is still relevant, which now stands for “Anyone But Carrie”.

Her hint at sticking to the present policies if she becomes the next chief executive has fuelled fears that she would not right the wrongs of the Leung administration.

Holding more than one-quarter of seats, or 325 seats, the pro-democracy EC members are not likely to back Mrs Lam. How they cast their votes could change the election results.

After Leung opted out, Tung looks set to back Mrs Lam. But his embrace of her may help little, or even be counter-productive, in elevating Mrs Lam to the Number One post. Being seen as just another C Y Leung cannot possibly be a blessing.

Be the first to comment on "‘Tung embrace’ with Carrie Lam a blessing or a curse?"