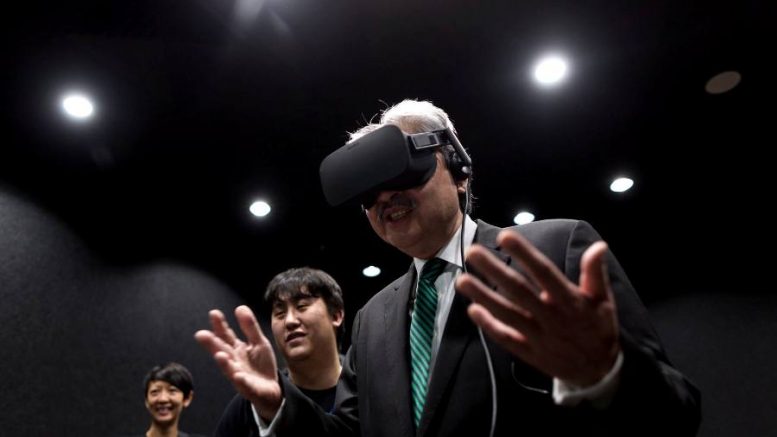 Undaunted by reports that Beijing had warned him not to join the next Chief Executive election, Financial Secretary John Tsang is tipped to announce his election bid soon. He recently visited FaceBook office.

Make no mistake. The shocking departure of Leung Chun-ying, now the outgoing Chief Executive, from the 2017 election does not mean the race for the top post is now a free-for-all. For example, anyone being labelled as pan-democrat will remain a non-starter. The only certainty is that the next leader will not be CY. But it will not be ABC, Anyone But CY.

To say the March 26 election is fraught with uncertainties is stating the obvious. After Friday afternoon, it is truer than ever.

In a note apparently aimed for the ears of his Number Two, Leung said in his “not-to-run” declaration on Friday he was hoping to give an earliest account of his decision to those whose decision of running or not running depends on his. He did not name name/s. But speculation was rife his deputy, Carrie Lam Cheng Yuet-ngor, is set to run. She has been soon seen as a hot favourite.

On Saturday, Chief Secretary Carrie Lam Cheng Yuet-ngor, who was tight-lipped on Friday, broke her silence. Mrs Lam, who has said “N” times she would retire after July 1, said she must now “reconsider” in view of the drastic change of the situation following Leung’s move.

She laid out three factors for consideration in her final decision. She said she would assess whether her bid would be conducive to the continued success in the implementation of the “one country, two systems” and Hong Kong people ruling Hong Kong policies.

Second, she would weigh whether it would be good for the continued implementation of the visions and policies of the Leung administration. Third, she said she needs the support and understanding of her family.

Carrie Lam hints at a U-turn

In an early public relation crisis management, Mrs Lam said she would expect to be criticised for making a U-turn on her decision not to run.

Put together, her remarks on Saturday are calculated pre-campaign initiatives that have paved the way for her to join the fray. She raised three questions, but the answers are obvious. A U-turn looks certain, which will be justified on grounds that she is determined to make continued contribution to “one country, two systems”, ensure the next administration follow the present “correct” policy direction set by her and Leung. With those grand goals, it is unbelievable her family would ask her to lead a retirement life.

Her announcement of a go-ahead within days should not come as a surprise. 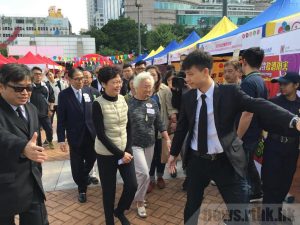 Chief Secretary Carrie Lam tight-lipped on Sunday after she revealed she would reconsider her decision not to join the next Chief Executive election.

Despite rumours of a “red light” shown by mainland officials for Financial Secretary John Tsang Chun-wah, not to run, there are increasing signs that he would ignore the reported “warning.” On Sunday, he said on his blog post he “will not fear challenges lying ahead.” In his article, he revisited the journey of connecting with people through his blog in the past nine and a half years, as if it was his farewell post.

On its face, Mrs Lam appears to be Beijing’s natural replacement after they axed Leung. Leung’s downfall could be attributed to two major reasons. First, he was blamed, at least in an important part, for the worsened schism in the society. Secondly, he lost support and faith in major sectors, in particular business and professionals. Sources close to the mainland authorities said it was practically difficulty for Beijing to help Leung win the Election Committee voting even if they wanted to.

Although Mrs Lam’s popularity has slipped in recent years, the chance of a rebound of her popularity is higher. Resistance against her within the pro-establishment camp is much smaller if Beijing gives their blessing to her. With Leung standing down, political tension may ease, creating more breathing space for Mrs Lam to mend the wounds of the society.

Still ABC, now Anyone But Carrie

Her chance of carrying the torch from Leung, however, may not be as good as it is widely thought. Ridiculed as Beijing’s “Plan B,” Mrs Lam has been ridiculed as the “female version of CY Leung” for her hard-line stance and loyalty to Beijing. To some, hers is also a case of ABC, Anyone But Carrie.

Her support from the 1,200-member Election Committee cannot be taken for granted. John Tsang may get stronger support if Beijing gives a free hand to the 1,200 members to cast their votes.

But if there is still a sea of doubts about Tsang’s chance, it is because it still looks unlikely Beijing has and will make a major change of its hard-line policy towards Hong Kong. The axing of Leung may merely be a change of horse. Whoever picks the torch may carry out the same policies dictated by Beijing to Leung.

Leung will soon be the past. Beijing’s policy in the post-Leung Hong Kong remains an uncertainty, nevertheless.

That will be biggest factor in Beijing’s decision on the next chief executive.