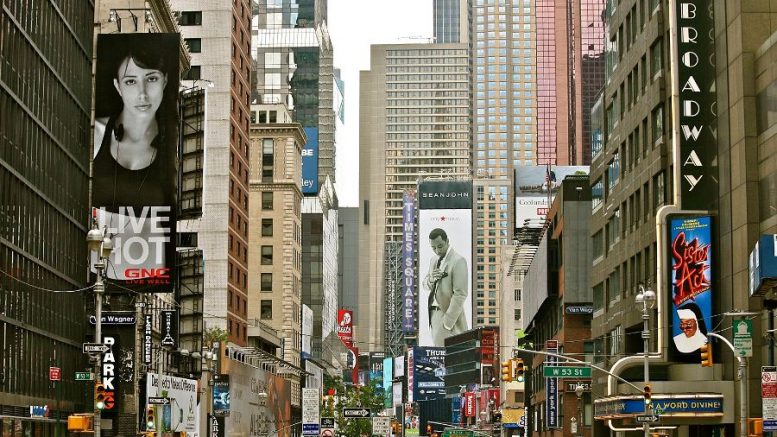 In terms of city icons, Hong Kong has its dazzling skyline, set against Victoria Harbour. And New York City has Broadway, a theatre district that is a hive of energy in Midtown Manhattan.

But there are downsides to being among the world’s biggest tourist draws. Both Hong Kong and New York have looked for design solutions to keep their busiest areas from becoming a mess of car and pedestrian traffic, so that they can be usable for residents and visitors alike.

The theatre district is actually only one small segment of Broadway. The whole street is New York’s oldest North-South thoroughfare, serving as a backbone to the city. In Manhattan, it is criss-crossed by numbered streets running from West to East. 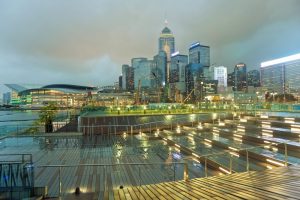 NYT DOT reconfigured Broadway, between 14th and 23rd Streets, to create one moving traffic lane, two parking lanes and a median-protected bike lane. Other streets were converted from two-way streets to one-way streets to make room for additional bike and pedestrian lanes.

Broadway between 42nd and 47th Streets, at the landmark Times Square and Herald Square, was temporarily closed to motorised traffic to create room for pedestrian plazas. The closure was part of the Green Light for Midtown Programme. An intersection once filled with traffic jams was transformed into one with public seating and places for walkers and cyclists.

Moves to limit car traffic are often met with opposition – by everyone from commuters to the business community. After all, private car ownership is growing across the world.

NYC DOT’s Broadway plans were criticized when first proposed, especially over concerns that a heavier burden would be placed on nearby streets.

But in the end, the more walkable Broadway area was so popular that pedestrian volume went up 6 percent at Herald Square and 12 percent at Times Square. Biking rates increased by almost 90 percent. The changes resulted in 63 percent fewer motorist and passenger injuries, and 35 percent fewer pedestrian injuries. The area had more pedestrians and cyclists – but also turned out to be safer.

As for car commuter concerns, point-to-point travel times were reduced by up to 17 percent in northbound trips in West Midtown and 8 percent in East Midtown.

A seamless waterfront, in theory

The question in Hong Kong is how the government will do a similar overhaul to make our own iconic areas more accessible. They are already relying on the advice of the Harbourfront Commission, and are planning on spending upwards of HK $10 billion to transform one of the world’s great waterfronts.

The famous skyline is best enjoyed from the two banks of Victoria Harbour, which divides Hong Kong Island and Kowloon. The harbourfronts also play a central role in the city’s use of public space. This could be for office workers wanting to eat lunch outside, or families who want to take a stroll down a promenade that is accessible to baby strollers, the elderly, and away from car fumes.

Hong Kong plans to link promenades along both sides into two seamless harbourfronts. Additional footbridges will enable more pedestrians to get across motorways safely.

Civic Exchange addressed use of the harbourfront in a Public Forum on 19 May, with a talk that drew more than 200 delegates.

The issue was also discussed in Voice of Hong Kong, when Civic Exchange CEO Maura Wong wrote about “How to Turn Waterfronts into Urban Treasures” in May.

There are similar discussions happening in neighbourhoods outside of the Central and Kowloon harbourfronts – but with mixed results.

In September, a coalition of local groups – the Clean Air Network, Walk DVRC and Hong Kong Public Space Initiative – worked to pedestrianise one segment of Des Voeux Road Central, a downtown thoroughfare normally jammed with cars, taxis, buses, trams, and pedestrians darting across traffic. Landlocked, crowded and heavily commercial – the area is not unlike parts of Broadway in Manhattan.

In a way, the Very DVRC initiative was a success. Art, sport, culture and green events were held on a strip in Sheung Wan that is normally filled with cars.

But in another way, it showed how limited these independent projects can be. Discussed since 2000, the pedestrianisation scheme was only allowed to take place on one day, 25 Sept, from 10 a.m. to 6 p.m. It was just a taster of what could happen long-term.

The area was cut from a proposed 1.4 kilometers to only 200 meters, meaning that cars still zoomed down the main parts of Des Voeux Road in the Central financial district.

This move was made due to the authorities being worried about whether people would be hit by trams; the police even marked off tram lines with traffic cones.

It is clear that, without a larger government plans, widespread pedestrianisation will be hard to achieve in busy, popular areas.

Civic Exchange, a think-tank, addressed some of these issues in October, during its Walk21 Hong Kong conference, which drew more than 150 speakers from around the world. Now Civic Exchange will take these ideas further when it launches a major new initiative on Dec 14 called WALKABILITY. The goal is to find solutions to make Hong Kong a more walkable city through better urban design.

This is an article provided by the Civic Exchange, an independent think-tank. It is part of a series of articles looking at how overseas cities have taken practical steps to improve their streets, with lessons that Hong Kong can learn.