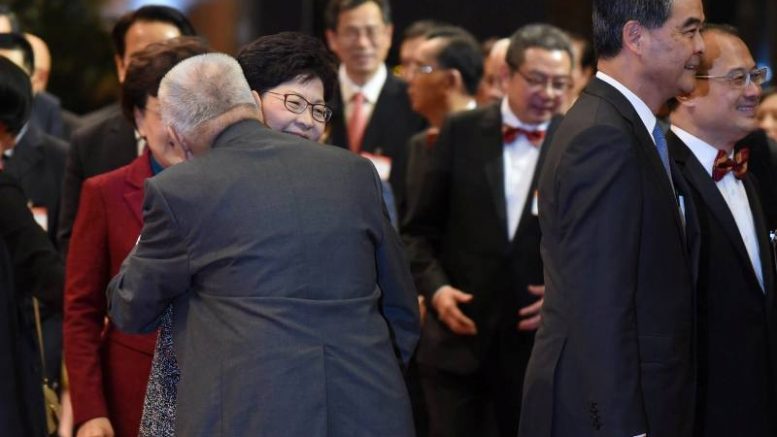 Results of the Election Committee election on Sunday may shed some light on Beijing's pick of the next leader.

Words from some quarters of the pro-establishment have there been that Chief Executive Leung Chun-ying is almost certain to be given his second term, thanks to the wild speak of Hong Kong independence, or kind of it, in recent months. Given Beijing is inclined to pick a tough guy like Leung to hit hard on separatist, they will be able to gather enough votes in the 1,200 Election Committee to keep him in power for five more years. Not necessarily.

Beijing’s power to do as they wish, however, is steeped in doubt as about 250,000 eligible voters go to polling stations to choose the electoral college on Sunday.

Sources close to the mainland authorities have confirmed Beijing was watching closely the results of the Sunday election and do some serious counting after the ballots are counted.

The question Beijing must take seriously is what if they fail to secure a comfortable majority of votes in the 1,200-member electoral body, which will pick the next leader on March 26. The no-secret magic number is 601.

That means even if, a real if, Beijing is still keen to give one more chance, or another five-year term, to Leung, they may not necessarily have enough votes to keep him in the Government House.

The wind of the so-called anti-independence battle may blow in the direction of Leung. But a host of other factors and developments are clearly not in favour of him.

Take the Sunday election. About half of the Election Committee members who nominated Leung in the 2012 election had not stood for this year’s election. Among those who stayed out of the race were some strong supporters of Leung, including businessman Vincent Lo Hong-sui, who was appointed by Leung to head the Trade Development Council.

A prominent business figure claimed some people who had backed Leung decided not to contest a seat to avoid embarrassment that might arise when they have to decide who they nominate if they get a seat.

“They will be caught between a rock and a hard place. They will be ridiculed if they support Leung again… They will hit headlines if they choose not to back Leung,” he said.

The seemingly depletion of the pool of Leung’s supporters has thrown more doubts into his re-election bid as the anti-Leung forces in both the pro-democratic and pro-establishment forces have pulled out all stops to grab seats.

Pan-democrats tipped to get up to 300 seats

Mounting their biggest-ever campaign for seats, the pro-democracy force is widely expected to boost their number of seats from about 200 in the 2012 Election Committee to 250, or even 300.

The additional seats are tipped to come from the professional sector. The ousting of Tony Tse Wai-chuen, a Leung’s ally, by pan-democrat Edward Yiu Chung-yim, in the architectural, surveying and planning Legco functional constituency election is indicative of the depth of anti-Leung sentiments in the professional circle.

Various business sources said the anti-Leung sentiments have prevailed in the business community. One said: “You almost did not hear anyone in the business circle who have spoken out loudly in support of Leung… Most of them support Financial Secretary John Tsang.”

Another source said one estimate was that the central government would only be able to “control” about 400 votes.

A mainland source said although Beijing could “do something” to garner support for Leung it would be doubly difficult if the number of Election Committee members they could exert influence dropped sharply.

And in view of the secret ballot, he admitted it would be difficult to predict the results if they tried to twist the arms of some Election Committee members for them to cast a vote on a candidate they oppose.

“The consequences will be unimaginable if the candidate Beijing prefers is being voted down in the secret ballot,” he said.

While the mainland authorities are feeling unsure about the Election Committee election, core supporters of Leung seem to have got panicky over the candidature of John Tsang, Leung’s major rival.

Based on the unconfirmed reports carried in pro-Leung media that Tsang was asked by Beijing officials not to run, two key Leung supporters have warned of dire consequences if Tsang ignored the “red light.”

That the Leung camp has launched the psychological warfare even before the 1,200 electors are named says something about the precarious situation of Leung.