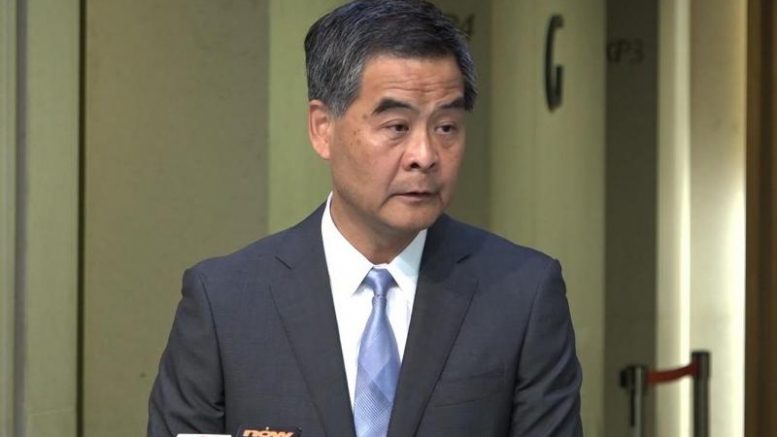 Chief Executive Leung Chun-ying is non-committal on re-election in his words, while taking steps forward for his bid for another term.

Officially, Chief Executive Leung Chun-ying said there will be no decision on his re-election plan before early September, apparently referring to the September 4 Legislative Council.

But in a full interview with the South China Morning Post published on Tuesday – his third for local newspapers recently, Leung has already walked the walk before the talk, paving the way for his re-election campaign.

He ruled out the possibility of an announcement on his re-election plan before the September 4 polls for obvious reasons. If he does so, he will become the convenient target of attack by the pan-democratic forces in the election campaign.

It will galvanise the so-called ABC, known as “anyone but C.Y., campaign, which will be the central theme of a list of candidates. The pro-establishment camp will be cornered to a difficult situation with mounting pressure for them to declare whether they support Leung’s re-election bid.

Citing the fact he announced his bid for the 2012 chief executive election in November 2011, Leung seems to have hinted at a similar timeframe, i.e. November.

By giving a time schedule for his possible announcement of re-election bid, Leung is indeed sending a message to the central authorities and the pro-establishment camp he will stick to his plan to fight for his second term.

Speaking shortly after he won the 2012 chief executive race, Leung has indicated his wish to have two terms of office. Since taking office, he has stayed muted and remained non-committal on his second-term plan. The truth is he has never given hints of a re-think, not alone dropping his re-election plan.

In his interview with the SCMP, Leung has started trumpeting his success in governance and advantages in his re-election bid while managing the political fallout of his deficiencies and failures since 2012.

Message Number One: Learn from mistakes.

His message: Yes, we made mistakes, but we have learned from the mistakes and build on the achievements.

Admitting mistakes, he has sought to turn it into his strengths by saying he has learned from them.

Although he was quick to emphasise he was giving a “theoretical answer,” he has reckoned that he has competitive edge over other rivals who have no experience of steering the Hong Kong ship in times of political and economic turbulence.

“I’d like to hear from the people whether they want to change the fundamental policies that I have put in place in the last four years… Do they like or dislike my housing policy, my ageing society policy, environment policy and so on.”

ung’s moves to gear up his re-election campaign has come at an interesting time with the Legco election drawing near and that the central authorities are still undecided about next year’s chief executive election.

Signs are aplenty Beijing remains undecided about whether they want a chief executive election with real contest or another “small-circle” election with the result fixed even before polling day.

Beijing may remain unsure about their game plan, but Leung feels certain he must convince Beijing he is ready in joining the fray regardless of what Beijing’s final decision is.

If Beijing had even failed to stop him from taking on Henry Tang Ying-yen in 2012, there are no strong evidence that shows they would be able to persuade Leung not to bid for his second term.

Be the first to comment on "Leung gives no date, but some ideas for re-election"