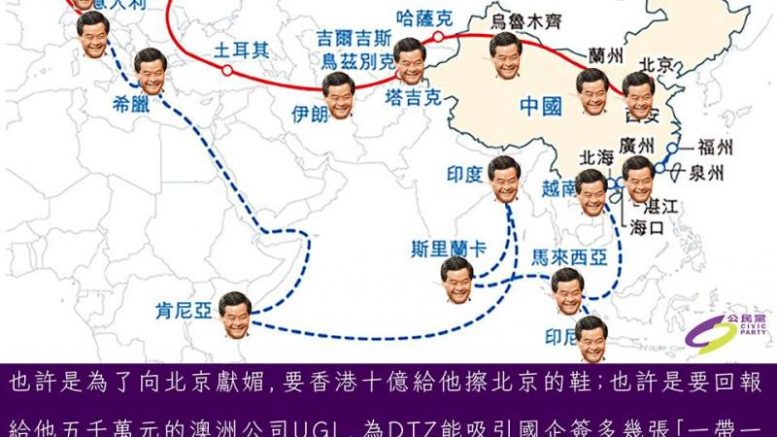 A government plan to set up a HK$1 billion Belt and Road scholarship has been ridiculed by the Civic Party as a move by Leung Chun-ying to please Beijing. Government decided to postpone the funding plan.

There are more signs of a change of tactic by the Leung Chun-ying administration aimed to moderate the political climate at a time when the election season officially begins soon.

Less than three weeks before the nomination period for the Legislative Council election begins, the Government yesterday took two initiatives to lower the political temperature.

First, the Government dropped the request for a controversial funding of HK$1 billion for the setting up of a Belt and Road scholarship scheme at the Finance Committee during the current legislative session. It marks another, and bigger, concession by the Government in the face of opposition from the pan-democratic legislators and some pro-government lawmakers.

Critics, however, remain unhappy and, importantly, unconvinced about the merits of the scholarship. Some radical lawmakers have threatened to launch filibustering.

Faced with the nightmare of delays in approval of funding for a list of pressing livelihood items at the Finance Committee, Chief Secretary Carrie Lam Cheng Yuet-ngor has given an early hint this month the Government would not railroad the Belt and Road scholarship funding at the expense of other priority funding proposals.

That Lam, dubbed as the “iron lady”, seems to have spoken softer and acted more flexibly is in sharp contrast with the tough stance of the Leung administration in countering the filibustering of radical lawmakers at the Legco not long ago.

The Government had been firm in their power to set the agenda of items on Legco’s Finance Committee. They fear being soft and conciliatory would embolden the opposition pan-democrats to dictate the Government’s agenda at the legislature.

With no strong public support for the scholarship plan, the Leung team has resigned to the reality they could ill-afford playing hardball with the pan-democrats.

More importantly, Leung knows well he needs to show he has taken the words of the National People’s Congress chairman Zhang Dejiang made during his visit to Hong Kong last month seriously. Zhang has called on Leung to foster dialogue with the pan-democrats, as he has done so during his Hong Kong trip.

It is against the backdrop of the blowing of moderate wind that Leung has acted to allay the public jitters over the plight of the booksellers at the Causeway Books. Among others, he said last week he has proposed to the central government to review the so-called notification mechanism about Hong Kong residents who get detained in the mainland.

Details of the ordeal of Lam Wing-kee, one of the booksellers, he revealed this month after being held in the mainland for six months have sent shivers down the spine of Hongkongers. Worse, it has raised serious questions about the notification mechanism.

Yesterday’s announcement by the Government about the consent of the central authorities to hold discussion on the mechanism represents another move to help pacify concerns about the viability of the “one country, two systems” policy.

Superficially, the two initiatives on the bookseller saga and Belt and Road plan are un-related. They are hardly coincidental, however. They are calculated attempts to boost the feel-good sentiments towards the beleaguered Leung administration.

With his popularity stayed at a “Fail” zone, Leung knows better than anyone his bid for another term will be doomed if he fails to salvage his popularity. Leung has succeeded in lobbying Beijing for him to join the 2012 chief executive election contesting against Henry Tang Ying-yen, who was seen as Beijing’s pick, after securing strong public support in polls.

Despite calls for the Government to cancel the handover anniversary celebrations in view of the tragic death of two firemen in the Ngau Tau Kok factory blaze, Leung looks unlikely to heed the calls. That said, it will come as no surprise if he takes the lead to show sympathy and express condolences at the official celebration on July 1.

More signs of softening, or kind of, will be the shape of things to come in the lead-up to the September 4 Legco election, followed by the Election Committee polls and the 2017 chief executive race.